The people of St. Kitts and Nevis and they may have been experiencing seemingly overcast conditions this past weekend and today, but the conditions are not related to rain but rather a plume of Saharan dust, as it makes its annual trek to the region from the Desert.

According to St. Kitts Meteorological Services, the expansive plume is expected to affect the islands over the next few days with one or two breaks and has the potential to reduce air quality and visibility, throughout its passage.

They noted the plume is currently traveling westward via the Atlantic Ocean and may even make it to parts of the United States, according to the National Oceanic and Atmospheric Agency (USA) by early next week.

According to SCASPA’s Senior Met Officer, Elmo Burke, between March and September each year, a mass of dust or the Saharan Air Layer (SAL) forms over the Desert eventually moving Westward across the Northern Atlantic, every three to five days. The SAL can extend 5,000 to 20,000 feet into the atmosphere, and be transported several thousand miles when winds are particularly strong. 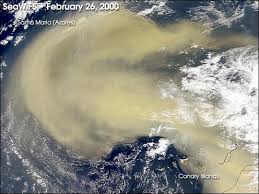 Mr. Burke said, “Due to the impending reduction in air quality, it is recommended that persons with respiratory ailments minimize their outdoor activities, if possible, as this can impact their level of wellness.”

The dry, dusty air associated with the SAL has been known to cause hazy skies along its path, as well as toxic algal blooms, according to weather and health experts.

One plus to the Sahara Dust or SAL at this time is that it can help to suppress hurricane and tropical storm development in the Atlantic Basin due to its dense, dry air and increased wind shear. This can be some, albeit short-lived, good news for countries located within the Hurricane Belt.

“This is a regular phenomenon during this time of the year and our advice to persons with respiratory issues is to be aware of the characteristics of this hazard and how to protect yourselves from complications, as a result of the heaviness of the atmosphere,” Burke said.