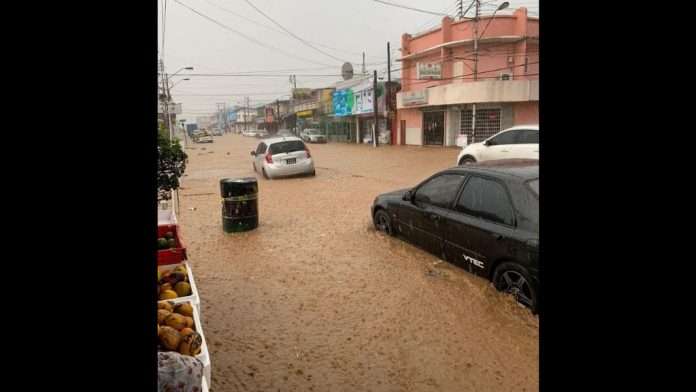 Several parts of northern Trinidad experienced some of the worst flash flooding seen in recent years yesterday, amid heavy and persistent rainfall that started just before noon.

Major roadways and communities in Western Trinidad were among the worst hit, with the free flow of traffic prevented for over two hours in some cases.

Motorists described the rainfall as ‘blinding’, as driving through it became difficult. The darkness associated with the thick cloud cover also forced many to drive with their lights on.

The rain began just before 11 am and continued for well over an hour.

The heavy flow of water from the hilly communities made the Western Main Road in Cocorite impassable by 12.15 pm, causing a backlog of traffic deep into Diego Martin and Carenage.

The gridlock persisted for over two hours, with hundreds of vehicles backed up in the traffic.

Video footage showed a line of vehicles facing east along one of the westbound lanes coming out of Westmoorings, as drivers tried their best to get past the water.

A photo of Cocorite that was shared online showed water stretching a span of near 100 metres as drivers waited for it to abate.

“Stuck in Westmall for over two hours,” Jan Kalloo commented on Facebook under the photo, as Roger Ganesh added, “This (is) the worst in my experience.”

Those who were able to make it past Cocorite heading towards Port-of-Spain found themselves stuck by more floodwaters under the Cocorite overpass, which prevented traffic from flowing onto the Audrey Jeffers Highway.

The route over the overpass towards St James also proved a fruitless option, as drivers were also met with floodwaters at the bottom of the flyover outside the St James Hospital.

As traffic built up there as well, some drivers tried using a route along Fort George Road to bypass the flood but a landslip along that road stopped traffic from going any further.

Further into St James, a murky torrent made passage impossible near RBC and video footage showed a tent from a nearby store overturned in the debris-filled water.

“Don’t think St James ever flooding like this,” Marc Husbands commented on Facebook, while Ann Marie Moore argued that the flood had a spiritual connection, stating, “This how God speaks, because he fed up with wickedness here. Murders, robberies, raping, fraud, total chaos here like gunmen takeover TNT. God says enough is enough.”

Mucurapo Road was no better, as the water rose several feet at the bottom of Bay Street to the dismay of those hoping to escape the problems encountered in St James.

Other routes along Ariapita Avenue and Wrightson Road were also impassable at various spots.

Along Tragarete Road, drivers reported difficulty getting past the Queen’s Park Oval and the Lapeyrouse Cemetery, as water also accumulated there, although not as high as in other areas.

Higher north, water also overtook Saddle Road in Maraval at the bottom of Scott Street, alongside the Maraval Plaza, slowing traffic but not completely stopping it.

One of the most dramatic videos of floods recorded yesterday, however, was at The Hollows at the Queen’s Park Savannah.

Amateur footage showed water violently gushing from a drain across a bridge, before spilling out across the grass.

“Is this the sea I am looking at…this crazy first time,” Nancy Beharry commented under the video.

Roslyn Gloudon added, “I never seen this happen before.”

The area lower down, opposite Queen’s Royal College, turned into a large pond as the water from The Hollows made its way there.

The rain also caused landslips that threatened homes in Carenage and Bournes Road, St James and further west, the road into Tucker Valley was also impassable as the river overflowed across its path.

The heavy rainfall was the result of the passage of a Tropical Wave over the island, although most of eastern Trinidad was unaffected.

The Meteorological Services has forecast partly cloudy conditions with occasional showers and a 40 per cent chance of heavy showers and thunderstorms favouring the afternoon today.