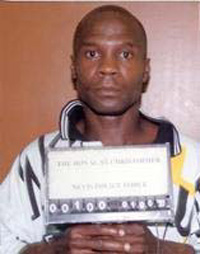 A man facing charges of house breaking and larceny fled from police after a court hearing on Tuesday and was recaptured after being chased by police, according to a press release from the authorities.

Ivan James, at right, was in Basseterre Magistrate Court on Jan. 8 for a hearing. He was refused bail and being held in jail until his May, 2008 trial.

According to police, “he was taken from the courtroom into the waiting area outside the court, when he escaped police custody through the main door of the courthouse.”

Police set off after James and recaptured him in Newton in the vicinity of Kenneth’s Dive Center.