CASTRIES, St. Lucia — The Organisation of Eastern Caribbean States (OECS) Commission is calling outstanding, enthusiastic individuals and leaders from around the world to serve in the capacity of Ambassadors for the Sustainable Development Movement (SDM) 2021.

Ambassadors will contribute to the advancement of the SDM by raising awareness about issues affecting Small Island Development States (SIDS) in your country.

SDM Ambassadors are considered the face of SDM 2021, to assist the Commission with raising awareness about its events, while reaping tremendous benefits resulting from this collaboration.

The Sustainable Development Movement Summit takes place every year to create an exciting space where senior government officials, industry and private sector leaders, global entrepreneurs and civil society converge to network, experience real transformation and chime in on the exchange of thoughts, best practices, untold stories and strategies concerning sustainable growth and development within the Caribbean.

World-renowned leaders, industry experts and thought leaders in critical industries participate in the summit to help members become incredibly shrewd. They provide top-grade intelligence on how to grow, innovate and create booming economies within SIDS.

The OES provides access to practical tools and winning strategies to support your growth and development programs at the county, regional and organisational level.

OECS is an international inter-governmental organisation dedicated to regional integration in the Eastern Caribbean.

This is the cooperation of countries who signed the Treaty of Basseterre to work together for a common interest like peace, stability and wealth.

The OECS came into being on June 18, 1981, when seven Eastern Caribbean countries signed a treaty agreeing to cooperate with each other and promote unity and solidarity among the members. The treaty became known as the Treaty of Basseterre, named in honour of the capital city of St. Kitts and Nevis where it was signed.

The 1981 Treaty was replaced in 2010 with a Revised Treaty of Basseterre, creating an economic union which is an agreement between countries where barriers to trade are reduced or removed for a single market with a customs union.

This Revised Treaty was signed on June 18, 2010, in Saint Lucia during the 51st OESC Authority meeting and establishes a single financial and economic space within which goods, people and capital move freely, monetary and fiscal policies are harmonized and countries continue to adopt a common approach to trade, health, education and the environment, as well as to the development of such critical sectors as agriculture, tourism and energy.

Significantly, the Treaty paves the way for the introduction of legislative competence at the regional level, so that the Member States of the Organisation act in concert to develop and enact legislation in certain areas specified in the Treaty.

The OECS is now an eleven-member grouping comprising the full member states of Antigua and Barbuda, Commonwealth of Dominica, Grenada, Montserrat, St. Kitts and Nevis, Saint Lucia and St. Vincent and the Grenadines who are part of the Economic Union and received the full benefits of Economic Union like free movement of people and goods, with the British Virgin Islands, Anguilla, Martinique and Guadeloupe as associate members of the OECS. 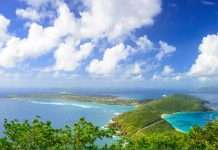