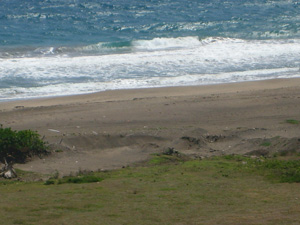 People illegally removing sand from beaches and ghauts may soon find themselves facing a judge and paying heavy fines or receiving jail sentences.

The Department of Physical Planning and Environment has issued warning letters to truckers and construction companies reminding them that action will taken against those who practise illegal sand mining.

Senior Environmental Officer Randolph Edmeade said that the implications of the illegal removal of sand from beaches and even ghauts are far reaching and affect the entire island.

“One may ask why we are so concerned about sand mining, because people think that beaches have an endless supply of sand and that is not so. There is a time when the wave currents take sand from the beaches and another time when the currents bring sand back to the beaches. So if people are taking sand away from the beaches, our beaches will end up being bare and rocky,” he explained.

Edmeade added that there were other environmental impacts as well since beaches act as protective barriers against strong waves during storms and hurricanes. He said that with the beaches being diminished, it leaves the coastline vulnerable to erosion and sometimes irreparable structural damage.

During his interview with The Observer the environmentalist also warned that illegal sand mining at beaches was interrupting the nesting patterns of sea turtles.

“St. Kitts happens to be one of the few remaining territories in the Caribbean that have certain species of turtle coming here to nest. We have the Leatherback, the Hawksbill and the Green Turtle. If we allow illegal sand mining to go on it will force these turtles to abandon their nesting sites,” he said.

Edmeade disclosed that in recent times the department had seen an increase in illegal sand mining and that reports came in on an average of one or two per week. He said upon receiving reports, conservation officers were sent out to investigate.

Edmeade said that the objective of the department was really to get persons to cease the activity and go through the proper channels. When asked why persons bypassed the process and removed sand from beaches and ghauts indiscriminately, he said he couldn’t say for sure since the process was a fairly simple one and sand was definitely available from Public Works.

“We’ve identified some areas where sand is being removed, including Keys Bay, Conaree Beach and Parsons Bay. Coming out of a study that was done a few years ago, it was identified that the only area in St. Kitts that could sustain bay sand mining is an area between Sandy Point and Newton Ground. Presently though, it is in the vicinity of the La Valle Golf Course, which is presenting some obstacles at this time. The access to the sand is now somewhat controlled. Sand mining, whether it be ghaut or beach sand, is controlled by our National Conservation and Environmental Protection Act. The Act states clearly the conditions under which sand mining is supposed to be done.

“The ministry responsible for the environment designated a particular government department to oversee this process. It used to be the Department of the Environment but it has now become the responsibility of the Ministry of Public Works and Utilities. Getting sand for construction work is a simple and relatively cheap process. Sand is available from Public Works; both ghaut and bay sand,” he said.

Edmeade was of the opinion that the current fines for persons found guilty of illegally mining sand were too ‘light’ and considered to be a ‘slap on the wrist’.

“I personally believe that the fines or penalties for this illegal act should be increased. Where it is at right now, it does not act as a deterrent to would-be offenders because it is within their pocket range. Right now sand costs about $7 per cubic yard for bay sand and $5 per cubic yard for ghaut sand from Public Works. So there is no excuse for persons to be taking sand out of our beaches and undermining ghaut areas,” he said.

Edmeade urged the public to be vigilant and cooperative and to report this type of illegal activity to Physical Planning and Environment or the Public Works department. He also said truckers caught committing the offence would be prosecuted to the fullest extent of the law.