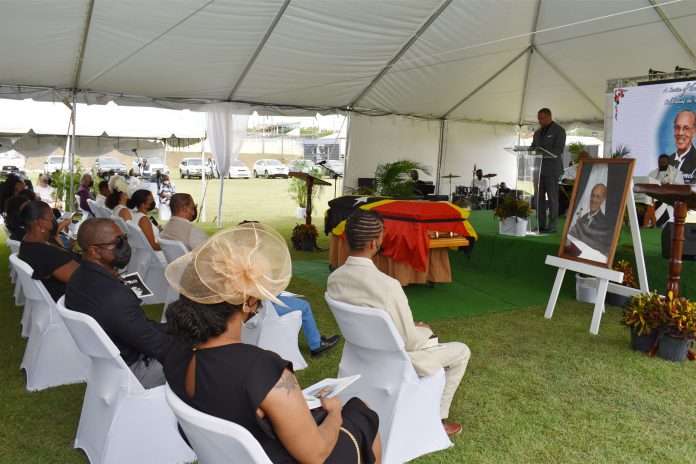 CHARLESTOWN, NEVIS, August 24, 2021 (MMS-SKN) — Charlestown was awash with colour Monday afternoon August 23, as the Federation of St. Kitts and Nevis bade goodbye to Nevisian icon, the Late Arthur Lionel Evelyn JP, CSM, OBE, at an official funeral that was held at the Elquemedo T. Willett Park. Interment was at the Bath Cemetery.

Mr Evelyn, who was born in Butlers Village on June 25, 1928, became the first Chairman of the Nevis Local Council when it was formed in 1967. When the Nevis Island Administration (NIA) was officially inaugurated in 1983, the New Premier Dr Simeon Daniel (now deceased and a National Hero) appointed Mr Evelyn the first Minister of Agriculture, Lands, Housing, Labour and Tourism, positions he held between 1983 and 1987.

Apart from his political activities, Mr Evelyn was a pioneer in establishing a pharmacy in Charlestown – Evelyn Drug Store. His other contributions to the Nevisian society include the Nevis Turf and Jockey Club, the Mental Health Association, Culturama Committee, the Lions Club, the Blind Light and Visually Impaired Society, and the St. Paul’s Anglican Church Vestry.

Mr Evelyn who died on Friday August 13, was a founding member of the Nevis Historical and Conservation Society (NHCS), and the oldest co-operative credit union society in the Federation – the Nevis Co-operative Credit Union (NCCU).

Leading in paying tributes was Premier of Nevis the Hon Mark Brantley, who was followed by a granddaughter of the late Mr Evelyn, Mrs Chevelle Willett. Others were Mr Llewellyn Parris a representative of the Nevis Reformation Party (NRP), General Manager of the Nevis Co-operative Credit Union Mr Sydney Newton, the Hon Spencer Brand for the St. Paul’s Choir, and a representative of Gulf Insurance. The eulogy was read by Mr Joseph Parry.

In paying tribute on behalf of the Nevis Island Administration (NIA), Premier the Hon Mark Brantley said that Mr Arthur Evelyn lived a life of service to others. He added that Mr Evelyn was a patriot, a teacher, an entrepreneur and a great soul of matchless integrity.

“On behalf of the Nevis Island Administration and the people of Nevis, I wish to extend sincere condolences to the loved ones of Mr Evelyn,” said Premier Brantley. “The entire Federation mourns with you and celebrates the extraordinary life of a remarkable son of the soil who devoted his life to the service and development of the Federation.”

After the funeral service at the Elquemedo T. Willett Park which was led by Rev. Fr. Christopher Archibald, the casket which was draped with the National Flag was carried by members of armed bodies and put on a carriage that was drawn by a government-owned pick-up truck to the Bath Cemetery.

After the graveside sermon, Prime Minister Dr the Hon Timothy Harris placed the first wreath on the grave, and was followed by Deputy Governor General for Nevis Her Honour Mrs Hyleeta Liburd, family members, and friends.