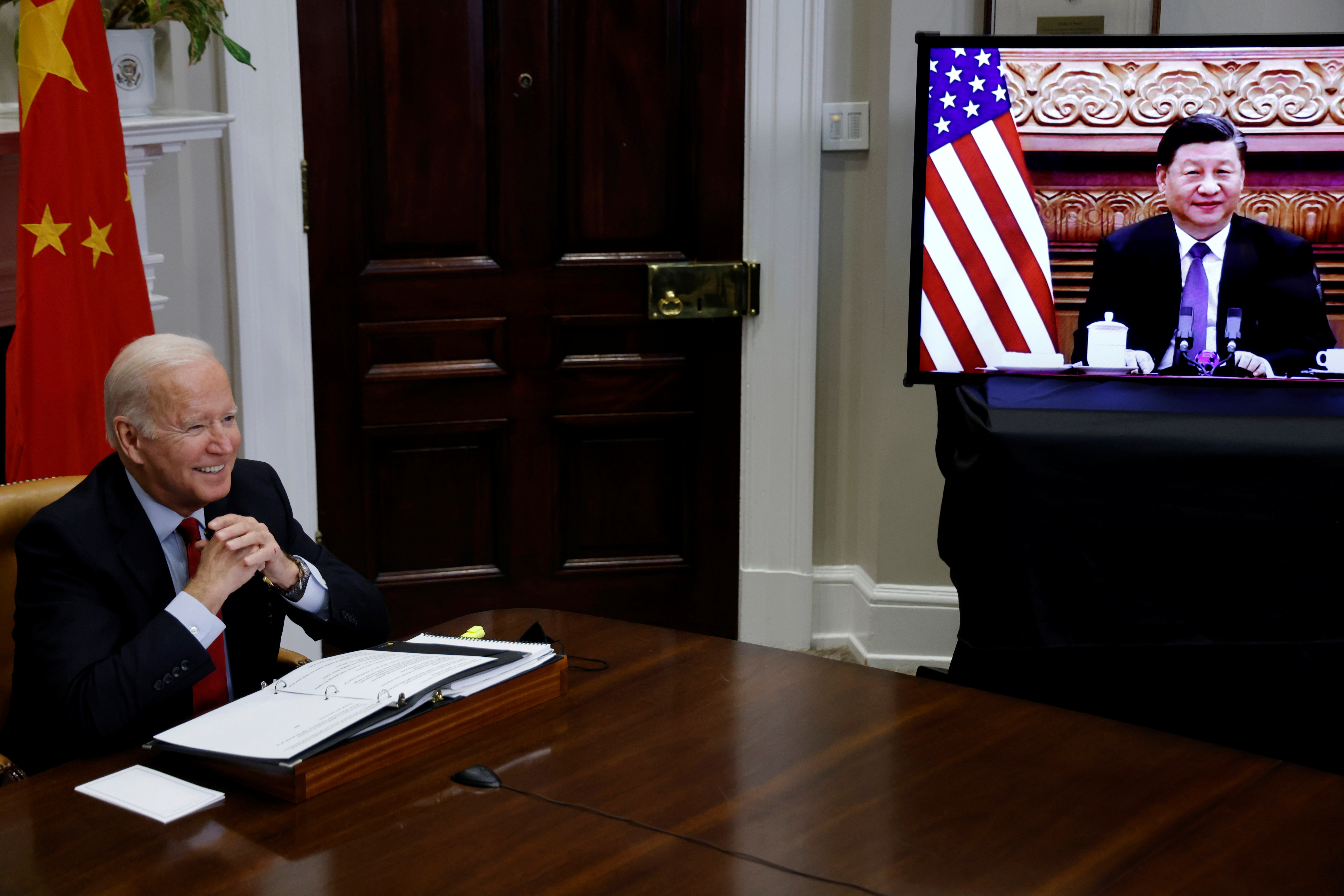 BEIJING/WASHINGTON, Nov 16 (Reuters) – Chinese leader Xi Jinping greeted U.S. President Joe Biden as “old friend” at the start of their first video meeting, using an expression that Biden has pushed back on.

In China, the expression “lao peng you” connotes fondness and shows a level of familiarity and trust, and when said by Xi, 68, reflects a shared history that dates to August 2011, when the two held hours of conversations and travelled in Sichuan province – before either had reached the highest office.

Wang Huiyao, president of the Center for China and Globalization, said Xi’s use of the expression is a show of genuine goodwill.

Daniel Russel, the top U.S. diplomat for Asia under former President Barack Obama, said it was part of each leader’s seeking the “narrative high ground” at the opening.

“Xi deliberately greeting Biden as ‘my old friend’ – after Biden went on record this summer expressly denying that they are ‘friends.’ And Biden, with a toothy smile, reminding Xi that all countries – including China – ‘have to play by the same rules of the road’,” Russel said.

Shi Yinhong, professor of international relations at Renmin University of China, noted Xi’s use of the term despite the difficult state of relations.

“When we Chinese call someone an old friend, we mean we’ve known him for a long time. But an ‘old friend’ doesn’t necessarily mean he is still a real friend,” Shi said.

Given current diplomatic tensions, Biden may not want to be seen by U.S. allies and his political opponents as too much of a “friend”.

In June, a reporter asked Biden, 78, whether he might call Xi – “old friend to old friend” – seeking access for World Health Organization investigators searching for the origins of COVID-19.

“Let’s get something straight. We know each other well; we’re not old friends. It’s just pure business,” Biden said at the time.

Ahead of the meeting on Monday, White House spokesperson Jen Psaki was asked about that exchange.

“Well … I can confirm … he still does not consider him an ‘old friend,’ so that remains consistent,” she said.


The United States and China disagree on the origins of the COVID-19 pandemic, trade and competition rules, Beijing’s expanding nuclear arsenal and its stepped-up pressure on Taiwan, among other issues.

Calling Biden an “old friend,” Xi said the two sides must increase communication and cooperation to solve the many challenges they face. Biden previously disputed the characterization of their relationship as an old friendship.

Speaking through an interpreter, Xi said: “As the world’s two largest economies and the permanent members of the U.N. Security Council, China and the United States need to increase communication and cooperation.”

Biden promised to address areas of concern, including human rights and other issues in the Indo-Pacific region, adding that “you and I have never been that formal with one another.”

The talks, which were initiated by Biden and began at 7:46 p.m. on Monday (0046 GMT Tuesday), were intended to make the relationship less acrimonious.

The two sides took a 15-minute break after a nearly two-hour first session that ran half an hour longer than expected, according to reports from Chinese state media, before resuming the conversation.

The early moments of the two leaders’ dialogue were observed by a small group of reporters with Biden in the White House’s Roosevelt Room before the heads of state and top aides spoke privately. The U.S. president smiled broadly as the Chinese president appeared on a large screen in the conference room.

Biden and Xi have not had a face-to-face meeting since Biden became president and the last time they spoke it was via telephone in September. 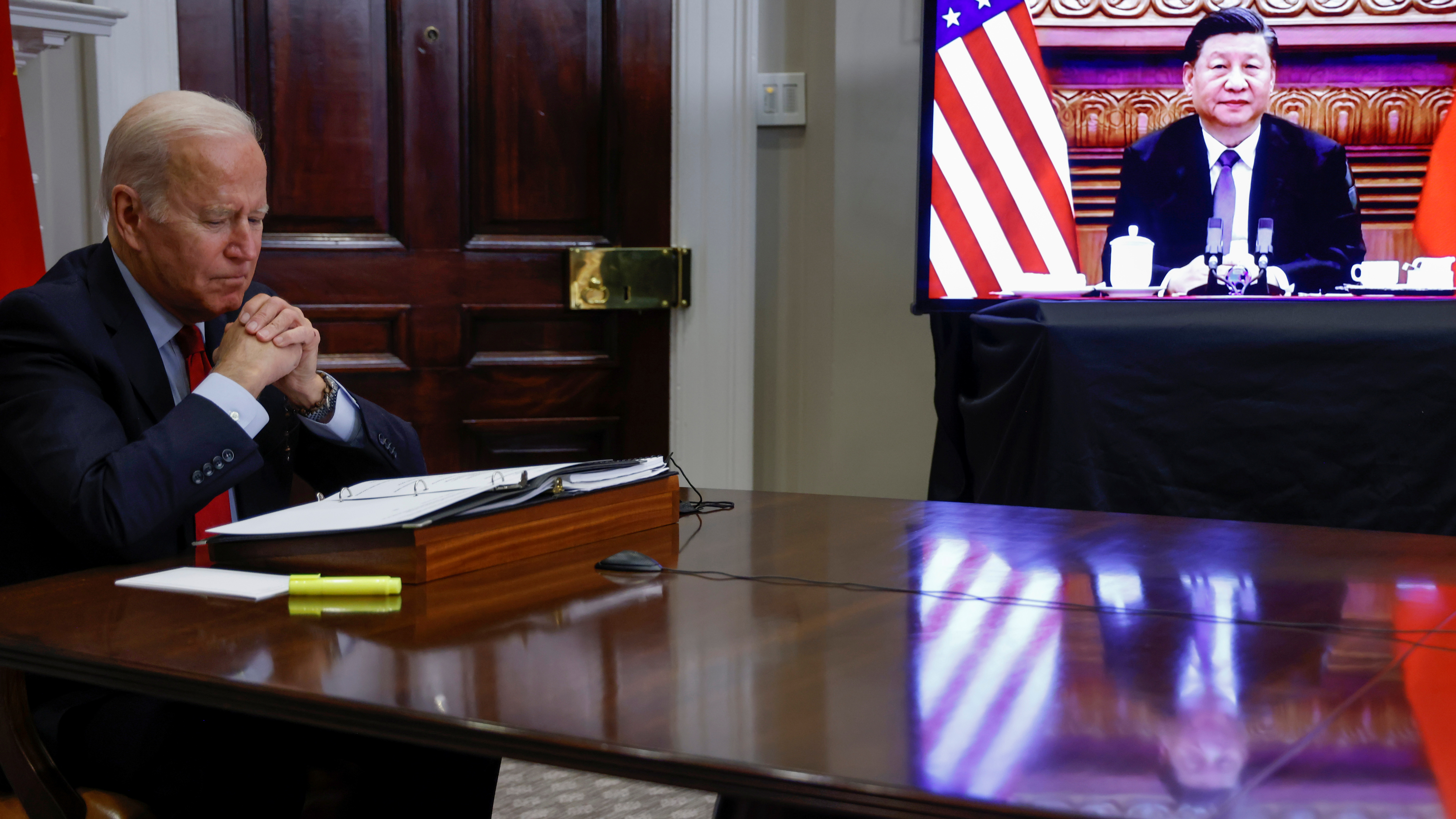 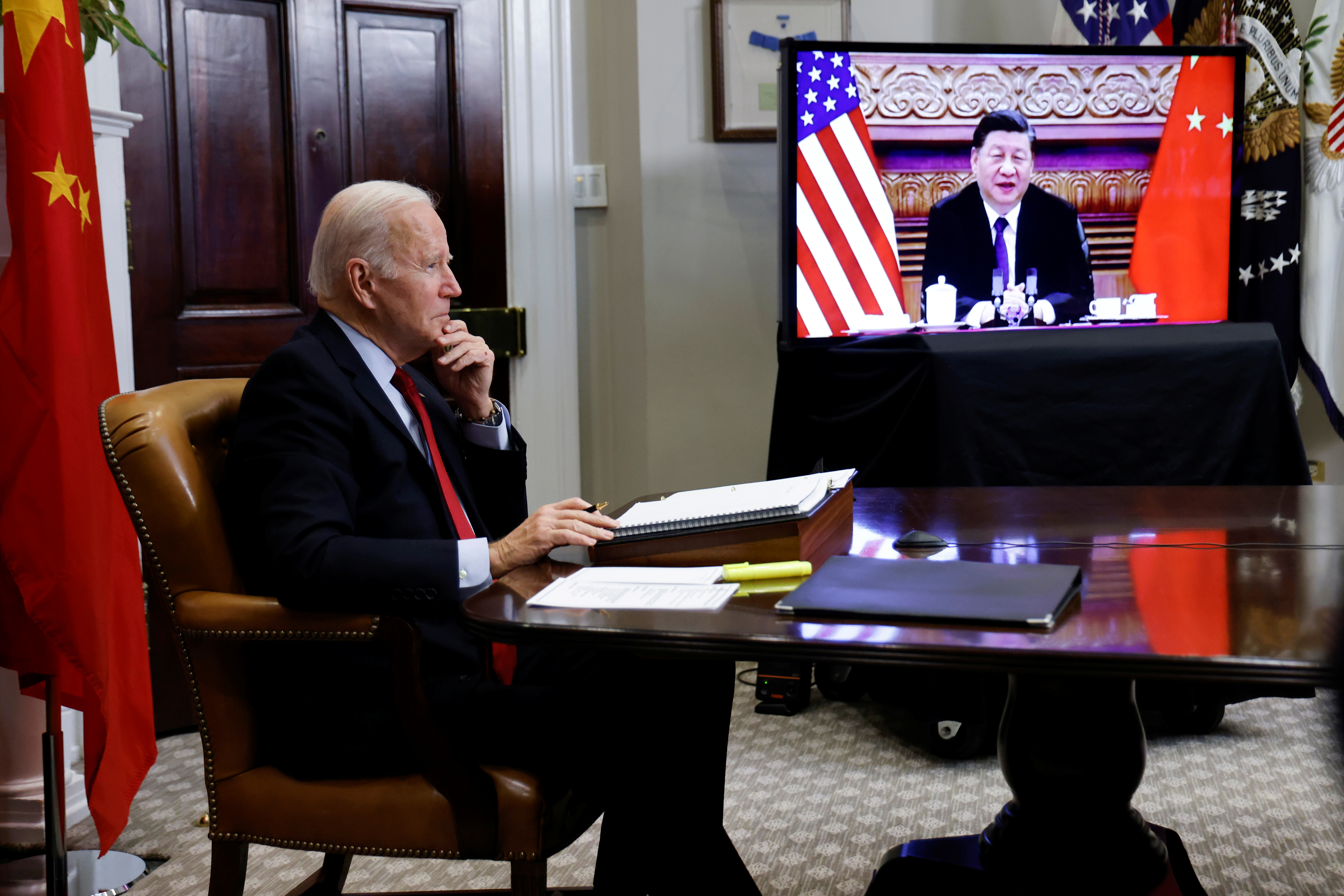 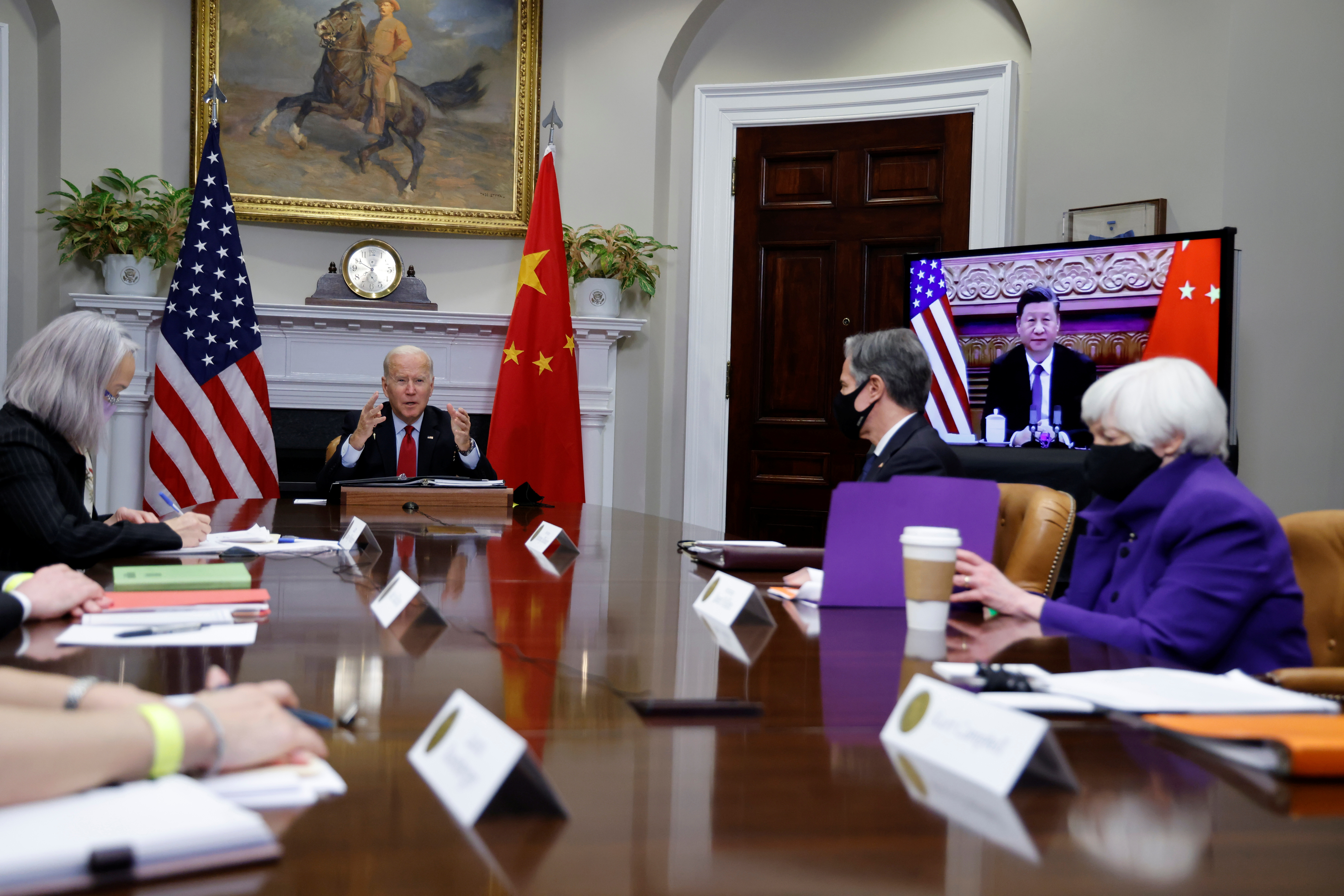 U.S. officials have downplayed expectations for any concrete agreements between both sides, including on trade, where China is lagging in a commitment to buy $200 billion more in U.S. goods and services. Not on Biden’s agenda are U.S. tariffs on Chinese goods that Beijing and business groups hope to be scaled back.

The White House has declined to answer questions on whether the United States will send officials to the Beijing Winter Olympics in February. Activists and U.S. lawmakers have urged the Biden administration to boycott the Games.

“Both sides are trying to establish the call’s goal as creating stability in the relationship, both through their collegial language and overall framing of the conversation and the importance of the relationship,” said Scott Kennedy, China expert at Washington’s Center for Strategic and International Studies.

“The question is whether they’ll reach agreement on anything, or at least, agree to disagree and avoid escalatory steps.”

Xi, looking ahead to the Olympics and a Communist Party congress next year where he is expected to secure an unprecedented third term, is also keen to avoid heightened tensions with the United States.

But he is expected to push back over Washington’s efforts to carve out more space for Taiwan in the international system. China claims the self-ruled island as its own. Beijing has vowed to bring the island under Chinese control, by force if necessary.

Foreign Ministry spokesman Zhao Lijian told a regular briefing on Monday: “It is hoped that the United States and China will meet each other halfway, strengthen dialogue and cooperation, effectively manage differences, properly handle sensitive issues, and explore ways of mutual respect and peaceful coexistence.”

A tabloid published by the ruling Communist Party’s People’s Daily on Monday called Taiwan “the ultimate red line of China.”

Taiwan is not the only flashpoint. Democrats in the U.S. Congress want Biden to make nuclear risk reduction measures with China a top priority, after the Pentagon reported that Beijing was significantly expanding its nuclear weapons and missile programs.

Beijing argues its arsenal is dwarfed by those of the United States and Russia, and says it is ready for dialogue if Washington reduces its nuclear stockpile to China’s level.

“This is President Biden’s opportunity to show steel, show strength on America’s side, to make it clear that we are going to stand by our allies and that we will not endorse or condone the malign behavior that China has engaged in,” said Republican Senator Bill Hagerty, who served as ambassador to Japan under former President Donald Trump.