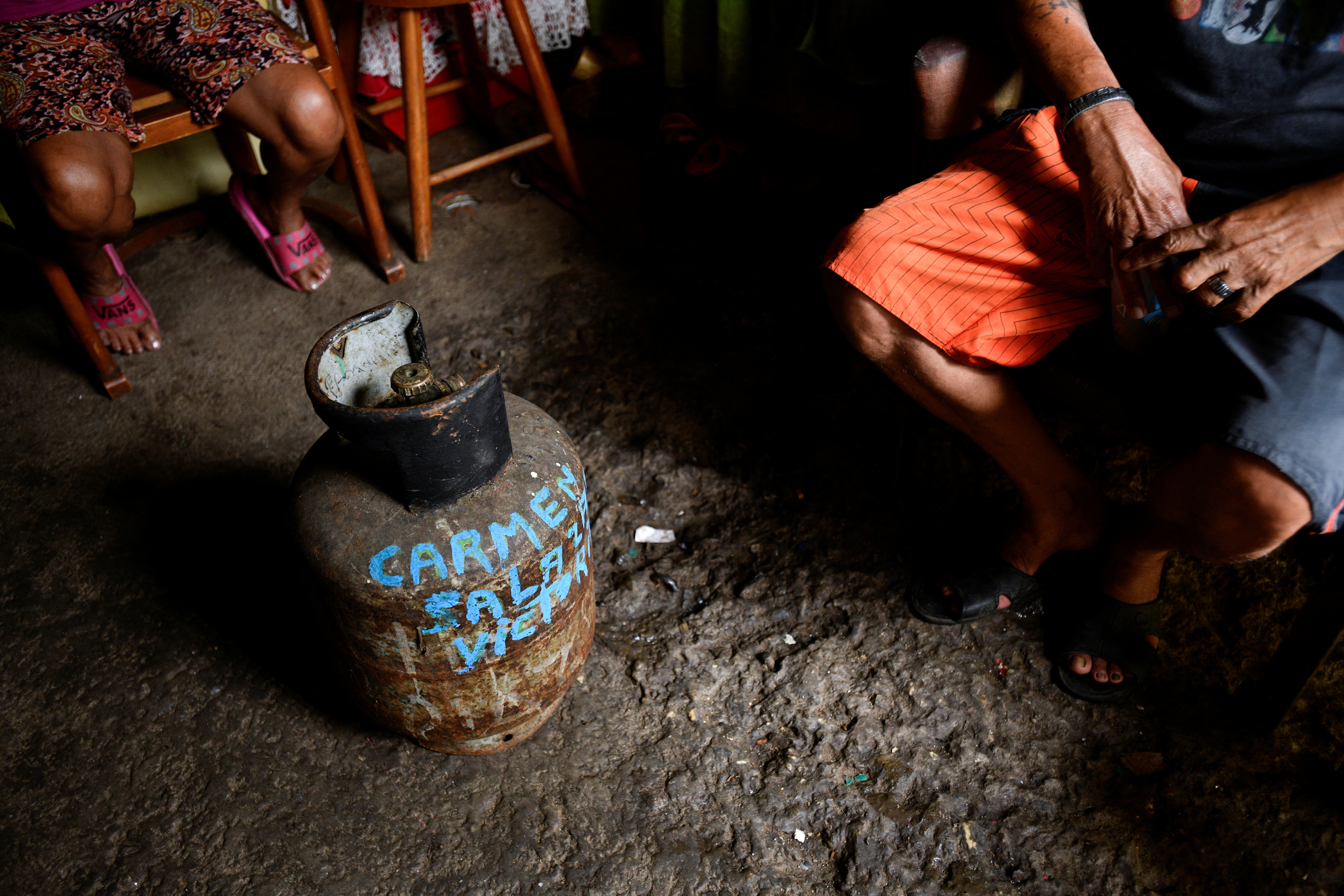 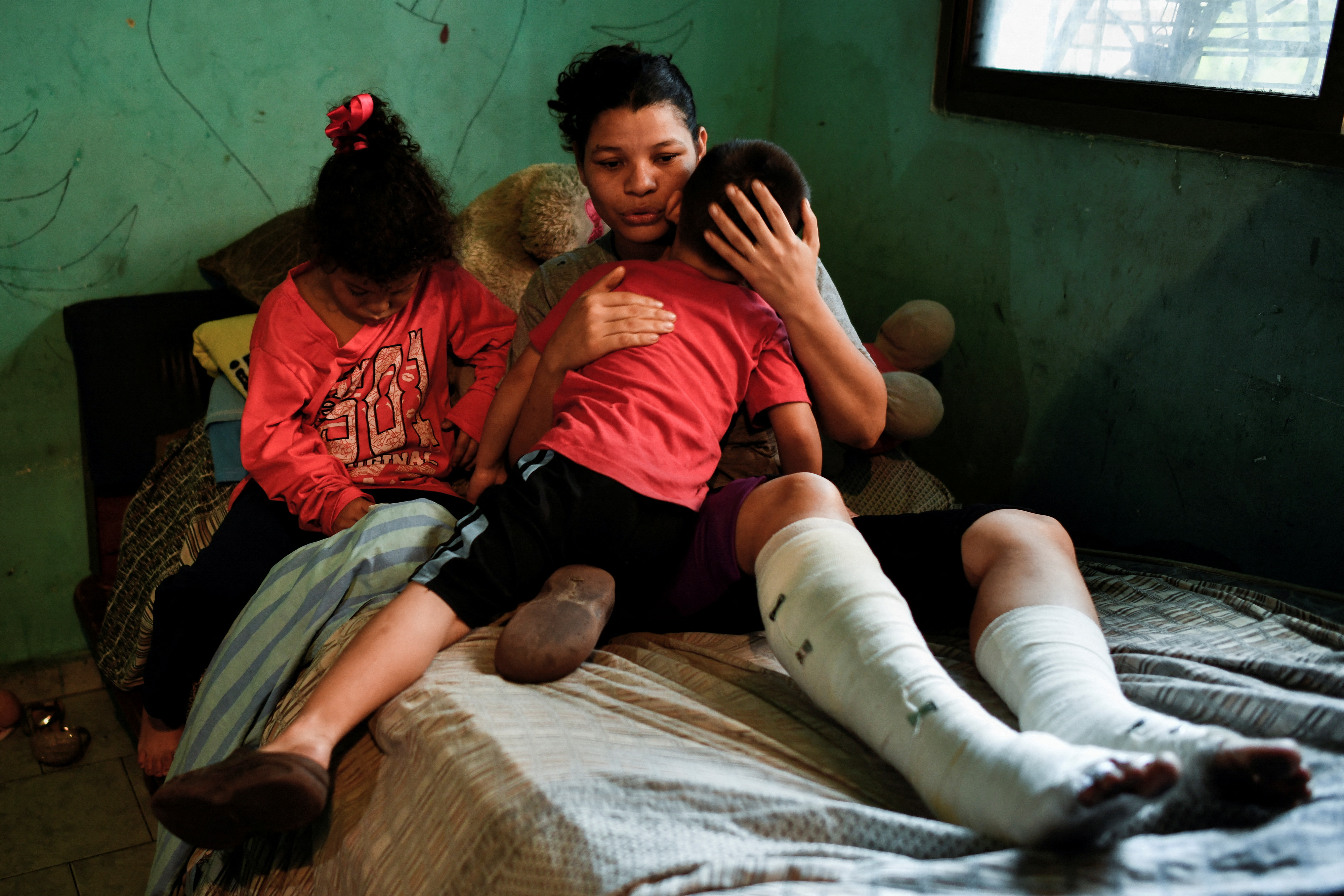 Members of a family sit next to an old gas canister, with a name written on it, at his home in the low-income neighbourhood of Petare, in Caracas, Venezuela April 30, 2022. REUTERS/Gaby Oraa NO RESALES. NO ARCHIVES

CARACAS, May 12 (Reuters) – Venezuelan housewife Leoana Maricuto was cooking in the kitchen with her husband and their 3-year-old son last week when a gas canister exploded, engulfing her in flames.

“My husband was making some potatoes, and all of a sudden the explosion happened,” said Maricuto, 32, as she sat on her bed, legs bandaged, in her poor eastern Caracas neighborhood.

Maricuto’s husband, vegetable seller Gerardo Quinones, 24, suffered burns to his foot, while a cousin hit by the cylinder in the accident was hospitalized for burns and other injuries.

“I couldn’t get out,” Quinones said. “We tried to put the fire out. The canister caught fire from the top.”

Neighbors extinguished the fire with soil before it spread through the house.

Many other Venezuelans have been less fortunate.

Deaths related to gas explosions have risen in recent months in Venezuela, where energy analysts say just 20% of an estimated 15 million gas canisters are fit for use in homes.

Many canisters are as old as 20 years, according to experts, and cash-strapped families receiving government subsidized gas rarely can afford to buy the few new cylinders available.

In Venezuela, home to the world’s largest crude reserves, over 75% of households cook with gas from cylinders, while 17% – mostly in the capital Caracas – get gas piped to their homes, according to the non-governmental Venezuelan Observatory of Public Services (OVSP).

State oil company Petróleos de Venezuela, S.A., or PDVSA (PDVSA.UL), pipes in household gas and supplies about 80% of the country’s liquefied petroleum gas (LPG), which is sold in canisters as propane. A handful of private firms control about 15% of the market.

Venezuela has been dealing with an LPG deficit since U.S. sanctions halted imports in 2020.

Refinery workers said PDVSA’s LPG production volumes and quality will continue to suffer as its refineries work at about a fourth of capacity.

NO TESTS, NO SMELL

Canisters should be subjected to hydro-static tests – pressurized water is injected to determine if there are leaks – and staff at filling stations should visually inspect valves, energy consultant Nelson Hernandez told Reuters.

Cooking gas is also supposed to have foul-smelling methanethiol as an additive, making leaks easier to detect, Hernandez said. “But there hasn’t been any for a year, because PDVSA didn’t have a way to import methanethiol.”

PDVSA, whose website says gas supply is “efficient, effective, safe and timely,” did not respond to a request for comment. Neither did Venezuela’s communication ministry nor canister maker Gavenplast.

“The latest cylinders are from 2015. On top of that, the old ones have not been thermostatically tested for leakage,” he said.

A fire brigade in the nearby state of Aragua gets an average of about 10 calls per week about gas leaks, said an official who asked not to be named.

Anibal Martinez, 25, lost four members of his family, including his cousin and her 3-year-old son, in a gas cylinder explosion that destroyed his home in 2021.

Martinez, who bears a scar on his back from the incident, was sleeping when a wall hit by the explosion fell on top of him, he said.

“I got out from under the rubble. I was able to see the sky, but the house was gone.”

Reporting by Deisy Buitrago and Johnny Carvajal in Caracas; Additional reporting by Mircely Guanipa in Maracay and Marianna Parraga in Houston; Writing by Steven Grattan; Editing by Richard Chang
- Advertisement -