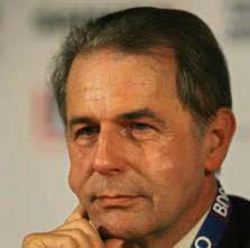 Mr. Bridgewater said he is not certain of the purpose of the visit, but he offered some ideas.

“I think one of the reasons is for the President to create some kind of bond with his constituency so to speak and match some of the things he hears with the reality,” he said. “I feel that some of the key things on the president’s agenda are to reinforce the young people and the government with the need for the federation to sign on all the Anti-Doping Legislations and become a part of all declarations that deal with anti-doping.”

Senor Mario Vazquez Raña, President of the Association of National Olympic Committees, will accompany the president. Senor Raña has visited the federation on two previous occasions: once in 1996 where he and his wife did the honour of cutting the ribbon at the Opening Ceremony of the original office of the Olympic House and again in 2000 with the former IOC President Antonio Samaranch.

The group is expected to arrive on St. Kitts on March 15 by 9:40 am and will remain on the island until 4:00 pm. St. Kitts will be the second island they visit on their four-island tour. The group is scheduled to visit Puerto Rico, St. Kitts, Trinidad, and Antigua and than head back to Europe.

Events Coordinator for the visitation, Miss Christine Walwyn of Walwyn Consulting, briefed the press on the events that would take place upon the arrival of the President Rogge and Senor Raña.

The SKNOC will have a welcoming ceremony to greet the visitors, after which they will travel to the Olympic House where there will be a ceremonial signing of the operations of the NOC, she said. There will then be a Handing Over Ceremony of a vehicle sponsored by the Olympic Solidarity of which Senor Raña is President. They will proceed to make courtesy calls on the Prime Minister and the Governor General.

“Although it was not planned, the visit of the presidents coincides with the completion of the Track and Field Stadium at Bird Rock and as such they would be able to have a first-hand tour of the facilities,” Miss Walwyn said.

She also stated that upon completion of the tour they would head over to the St. Kitts Marriott Resort where they would have a short lunch after which they would head off to the Kim Collins Highway, where there will be a planting of a number of trees as a ceremonial gesture.

The group would then head back to the airport to board the flight to the next destination, Antigua.