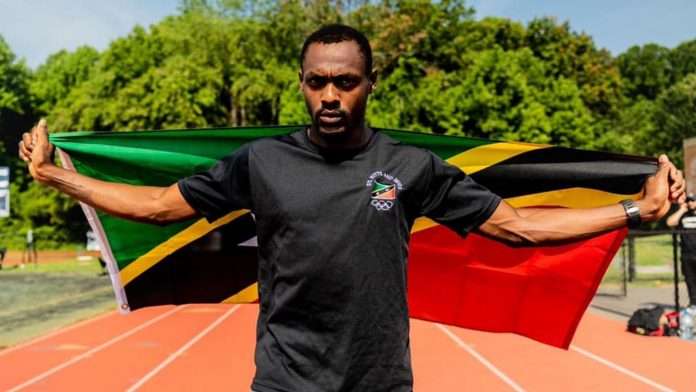 Jason Rogers is the most decorated athlete in St. Kitts and Nevis. Now he’s after Olympic glory in Tokyo.

He came from humble beginnings, growing up in ‘Hub City’, ‘S.P. where de best be’, the town of Sandy Point if you will. He is 29 years old and he is a son, a father, a friend.

“Track and field has done so much for me. It has moulded me into the man that I am today.”

In July 2021, Rogers will represent St. Kitts and Nevis at the Olympics for the third consecutive hosting of the sporting event, having participated in London 2012 and Rio 2016.

He got his start in track and field at the primary school level, attending the Sandy Point Primary School where he ran at Sports Days and Sports meets. This is where said he noticed he was “kinda good”.

“I noticed I was winning all of my races and so I kept running and running and I never stopped.”

“Track and field has given me so much to believe in, so much morals and discipline, it trained me and has taken me around the world. I have been to every continent except Africa and Antarctica. I really appreciate the sport and have a lot of love and respect for it.”

Rogers carved some time out of his busy training schedule to have a chat with Loop about his decorated career and qualifying for the Tokyo 2020 Olympics.

About a month and a half ago Jason had a setback; a hamstring issue. Right now he and his coach are very happy about how training has been going. “We have a nice tight schedule planned out and as long as we stick to it we will be pleased with the performance.”

He said while it is a great feeling knowing he has qualified for the 100M race with a personal best of 10.01, it was a bittersweet moment.

“It was great in the sense that I feel very proud of myself for never giving up because it was really tough but I didn’t let the tough times get the best of me. I fought and now I’m here with my qualifying standard, ready to go to the Olympics.

“It is a bittersweet feeling, however, knowing that there are athletes in St. Kitts and Nevis who could qualify alongside me but because of the lack of support and opportunities they are unable to hone their skills.”

While he is a professional athlete, Rogers is not signed to any brand or sponsored by any company. He said it all comes down to support which he doesn’t have, but had high praise for his coach and his team who has offered great assistance.

He said this can change through his performance at a level that would bring in outside support. “I have to put myself on a level where the support comes from outside.”

First Federal Credit Union in St. Kitts has come on board as a sponsor for Rogers in his participation at the upcoming Olympics.

What makes an Olympian

“A lot of long days, a lot of hard work…it’s a lot of hurt, pain and tears. There are a lot of injuries and hard times as well.”

Jason has sacrificed a lot for his athletic career. Being away from his 4-year-old daughter, his family and friends in St. Kitts for 6 to 8 months every year to train in the United States has been one of the most difficult things.

Jason cites his mother Pearlina Richards as his inspiration and driving force despite the challenges. He is, in some ways continuing her legacy.

“Track and field is a sport that my mother really loves.”

Jason said his mother made a name for herself in track and field when she was younger and he heard all the stories from persons within the community growing up as a young sprinter himself.

“Ever since I was small, my mother kept pushing me. Every time I would stray from track and field, she always reminded me about track and field.  She always says if she had the opportunities that we have now, she would have gotten so far in the sport. Her own love for the sport causes her to maintain my focus.”

Rogers says he has a number of business ideas he wants to venture into.

During the pandemic, he joined with a couple of friends in Sandy Point to start the Reggae Rock Farm. The excitement about his business was visible as he spoke with pride about the farm’s unexpected success. He said because of how well it has been doing they keep pushing forward and the farm’s growth has been incredible.

His intention is to work toward assisting those athletes who will be coming after him.

“There is no one trying to help right now. I want to be the person who would change things for national athletes by being their voice; I need that and I don’t have that and I know athletes coming up will need that too.”

Rogers encourages young persons to follow their dreams whether it be in athletics or in business. “Going after what you want, you will encounter a lot of fights, a lot of obstacles, but all these struggles will shape you into the person you need to be to get what you really dream of.  No matter what you do, don’t give up. The fight will come; it will be hard, it will be tough but don’t let that make you give up. Enjoy the tough days because it can’t rain forever, you will have success one day.

“I always believe in myself. I always push myself.”