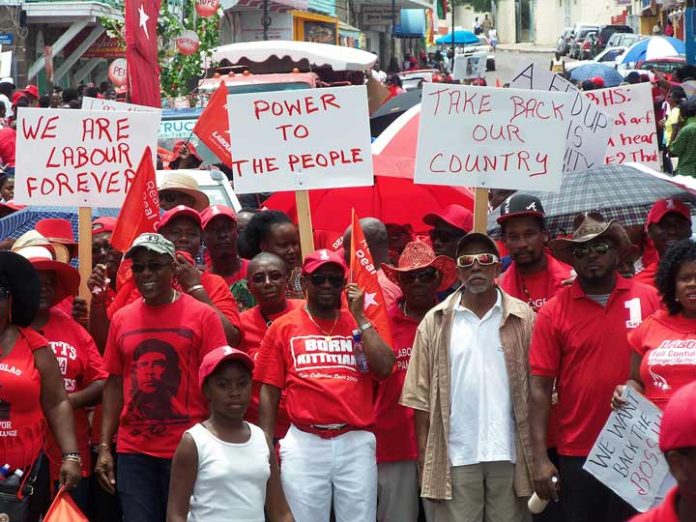 Basseterre was painted red on Labour Day (May 2) as thousands of supporters of the Labour Party and the St. Kitts-Nevis Trades and Labour Union, as well as revellers, marched, sang and danced through the streets in what the Rt. Hon. Dr. Denzil Douglas claimed to be in protest of victimisation meted out to many in the Federation by the Government of National Unity.

He also claimed that the march was against nepotism being practiced by the administration.

“The message to the government is that it must amend its ways, it must amend its policies of persecuting workers in the public service and outside of the public service,” Dr. Douglas told reporters while marching through the streets of Basseterre. “The message is that it must change its practices noted over victimisation and practice of nepotism in particular, which is eating away the heart of accountability and respect in the government of St. Kitts and Nevis.”

Questioned on the reason for claiming that the government practices victimisation, Dr. Douglas said, “The government has sent home several hundreds of people. In fact, as Marcella said a moment ago, women in particular are targeted.”

Douglas, who leads the St. Kitts-Nevis Labour Party and is also Leader of the Opposition in the Federal Parliament, had thrown out a challenge to those who participated in the march to compare the policies of his party while in office against those of the current administration.

“Look at where we are with regard to the policies that Labour had in place. The children…they were receiving their laptop computers because Labour had a progressive policy with regard to computer literacy of our nation, with little expense to the parents of our children. Labour said it would bear the brunt of all of these. But what happened in the end? Labour was out of office and the policies have been destroyed.”

In addition to Douglas, the march was led by the Labour Party’s candidates and former Government Ministers, including Richard ‘Ricky’ Skerritt who explained to one media representative the reasons for his presence.

“I am acknowledging, respecting and honouring workers’ rights. In our country we have a peculiar problem; in that the government doesn’t respect workers’ rights, so today we are trying to make the point to the country that enough is enough and victimisation and nepotism should go through the door. So I am here really just an individual, a very, very strong supporter of workers’ rights and saying to the people of St. Kitts and Nevis and the region that I stand on the side of workers.”

Many of the protestors had borne placards, some of which read: “We are the workers!! We are the masses!!” “Let us take back we Government.” “Thank you Labour for elevating me!! I am a proud supporter!!!” “You sell out the country for $500.00” and “Marching because it is my fundamental right! Look how they are victimizing our people…cant be right!!!”

The day began with Dr. Douglas leading members of the Labour Party to the Springfield Cemetery, where they were engaged in the tradition Wreath Laying Ceremony at the graveside of the fallen heroes and stalwarts of the Labour Movement.

This was followed by the march which started at the Patsy Allers Playfield and ended there with a Rally.

Speaking at the Rally, Dr. Douglas revisited the past while giving an explanation for the celebration of Labour Day and reflecting on the Buckley’s Riot as well as the stalwarts who championed the cause of the Labour Movement in the Federation.

Douglas said that after the formation of the Trades and Labour Union, its leaders had eventually gained political power and became the government of the country. He noted that one of those leaders was Robert Llewellyn Bradshaw who, together with Joseph Nathaniel France and Caleb Azaria Paul Southwell, provided leadership of the country and also of the Labour Movement.

“We have taken over from them and were able to build on what they had achieved in order to complete the progress of our country,” the former Prime Minister emphasised.

From this backdrop, he reiterated his accusation against the Government of National Unity, stating that it has been attempting to trample on the workers’ rights.

“Here in St. Kitts and Nevis you will recognise that the march of solidarity for the workers of this country took on a different type of colour, because it means that over the last 14 months since a new government has been in office it has attempted to trample on the rights of workers, not only those rights of the public service but those generally in our country, in the private sector as well.”

He claimed that the current administration had also been trying to reverse all of the gains the nation had achieved over the years.

“We have therefore said no, we will not stand idly by. We have worked so hard to ensure that people must not be dismissed without a cause. This government has been sending home hundreds of public servants without cause, depriving them of the right to work. And even when they have not removed their salaries from them, they have kept them on their payroll but have given them nothing to do.”

The political party Leader said it is a violation of the basic principles that the nation’s forefathers had worked so hard to put in place.

He stated that those who had worked for decades in the sugar industry, the industrial estate and the hotel and tourism sector and had lost their jobs for whatever reason, were never in receipt of gratuity and pension and that the Labour Party Administration had rectified that anomaly.

“Today, after 14 months of this government, they have reversed the gratuity that has been given, the long service gratuity that has been put in place by legislation here in our Parliament,” Dr. Douglas said. “We are saying today in this march that the Labour Movement will not tolerate this. We will continue to fight for the progress of our people in St. Kitts and Nevis.”

He emphatically said that when the Labour Party gets back in office they would reverse all “antiquated laws” recently passed in the National Assembly by “this concoction government led by Timothy Harris”.