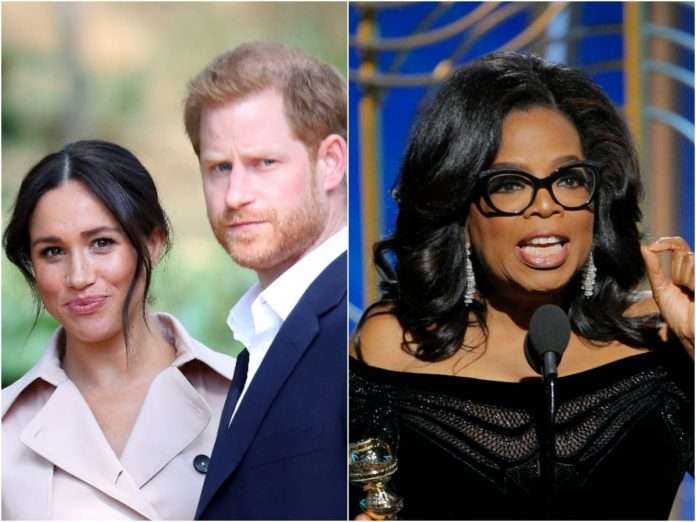 (CNN) Meghan, Duchess of Sussex, said in a bombshell interview with Oprah Winfrey that her life as a British royal was so isolating and lonely at one point she “didn’t want to be alive anymore” — a stunning admission likely to rock the foundations of the centuries-old institution.

In her first public (comments since she and her husband Prince Harry announced their plans to step back from senior roles in the British royal family, Meghan described herself as the victim of an image-obsessed Buckingham Palace, which weighed in on everything from how dark her son Archie’s skin color would be to how often she went to lunch with friends.

The TV special was highly anticipated because Harry and Meghan are now allowed to speak more freely about the royal family due to their effective split from the palace.

And the couple did not hold back.

Meghan began the interview speaking with Winfrey one-on-one outdoors in sun-drenched Southern California, where she and Harry now live. Meghan made several revelations about the royal couple’s private lives, including that the two were married three days before their official wedding and the second child they are expecting is a girl.

But the most powerful portions of the two-hour interview came when Meghan discussed the difficulties of her life as a working royal. Meghan, an American former actress, said she was forced to suppress her outspoken nature and give up her personal freedom. She said she did not have access to her passport, driver’s license or keys after she joined the royal family, and they were only returned when the couple moved away.

Meghan said the situation was exacerbated by often racist and “outdated, colonial undertones” that repeatedly appeared in coverage of the couple in Britain’s notoriously vitriolic press.

Fighting back tears at one point, Meghan said the thoughts of suicide were incredibly difficult to bear, and she was reticent to share them with her husband — who lost his mother, Princess Diana, when he was a boy.

“I was really ashamed to say it at the time, and ashamed to have to admit it to Harry especially, because I know how much loss he has suffered. But I knew that if I didn’t say it, that I would do it — and I just didn’t want to be alive anymore,” she said.

Harry said he was “terrified” by his wife’s admission.

“I had no idea what to do, I went to a very dark place as well, but I wanted to be there for her,” he added.

The prince, who is sixth in line to the throne, said there is a culture of suffering in silence in the royal family. However, Meghan’s race — she is half Black — and the abuse she endured made the situation even more difficult for the couple than it had been for other royals.

Harry said that pushed him to discuss the issue with the royal family. He told Winfrey he believed there were many opportunities for the palace to “show some public support” in the face of continued racial abuse in the press, “yet no one from my family ever said anything. That hurts.” 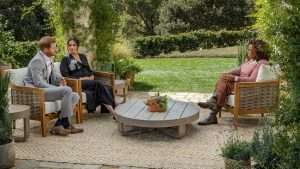 Harry said the issue was bigger than just the couple, because of what Meghan represented as an influential Black woman in a public position.

“It was affecting so many other people as well,” he said. “That was the trigger for me to really engage those conversation with the palace, senior palace staff and my family to say, guys, this is not going to end well.”

The interview is likely to have lasting consequences for the royal family. It aired at an already fraught time for the royals, with Prince Philip, the Queen’s 99-year-old husband, spending a third week in hospital following a heart procedure Thursday.

Members of the royal family conduct tell-all TV interviews roughly once a generation. A 1970 interview with the abdicated King Edward VIII and Wallis Simpson posed problems for the palace. Twenty-five years later, Princess Diana’s “Panorama” confessional was watched by tens of millions in Britain. Meghan wore Diana’s diamond bracelet during the Winfrey special.

Harry and Meghan’s interview may have reached an even larger audience. It aired on prime-time television in the United States and was relentlessly promoted by CBS in the days ahead, with the network saying it would peel back the curtain on why Meghan and Harry split from the Windsors last year.

The Sussexes painted a picture of an institution so stuck in its ways that it forced a young, biracial couple to simply live with racist abuse at a time when much of the world is coming to terms with the lasting legacy of institutional racism.

“It has been unbelievably tough for the two of us,” Harry said as he sat beside his wife. “But at least we had each other.”

Harry and Meghan stepped back from their royal duties in early 2020, but the formal agreement they struck with the palace was only reached in February.

The deal allows them to both keep the royal titles bestowed by the Queen, but they will give up their royal patronages, which are to be redistributed among working members of the royal family.

Harry said the decision to step back boiled down to “a lack of understanding” between the two sides. He said he would not have stepped back from his family if it was not for Meghan, who helped him realize the couple was trapped.

Meghan said she felt she was victim of a “character assassination” in the British media and the machinations of the palace, which valued how it is perceived more than her, her husband and her child’s well-being.

She also said that when she was pregnant with her son, Archie, she was told he wouldn’t be made a prince and thus wouldn’t receive security.

“I regret believing them when they said I would be protected,” she said.

Meghan specifically complained of how lonely and isolated life became after her marriage. She said she wasn’t even allowed to go out for lunch with friends at times because she was too heavily covered in the media.

“Everyone was concerned with optics,” she said.

Meghan said it was particularly difficult putting on a happy face while suffering in silence. She recounted one particular evening at Royal Albert Hall with her husband, while the two were sitting together in the royal box.

“Every time that those lights went down,” she said,” I was just weeping, and he was gripping my hand.”

When the lights went back on, Meghan said “you just have to be on again.”

The interview has sparked something of a public relations battle between the Sussexes and allies of Buckingham Palace.

On Tuesday, following the release of promotional clips in advance of the interview, The Times of London published an article that alleged Meghan bullied several staff members. The story cited unnamed royal aides saying a complaint in 2018 claimed the duchess drove out two personal assistants from her Kensington Palace household and undermined the confidence of a third staff member. CNN has been unable to corroborate the claims.

The sources said they approached The Times because they felt the version of Meghan that had publicly emerged was only partially true, and they were concerned about how matters of bullying had been dealt with. The report said the sources believed the public “should have insight into their side of the story” ahead of the couple’s interview with Winfrey.

Buckingham Palace said it was “very concerned” about the allegations outlined in the report and would investigate. A spokesperson for the Sussexes dismissed the Times report as “a calculated smear campaign” ahead of the interview.

Meghan told Winfrey that despite the ordeal, it was important to differentiate the royal family from “the people running the institution.”

The Duchess of Sussex said she had been welcomed into the family itself and Queen Elizabeth II, Harry’s grandmother, had always been wonderful, warm and welcoming.

Meghan discussed rumors of a dispute with Kate, Duchess of Cambridge, the wife of Prince William. Meghan said reports she made Kate cry over the dresses of flower girls at her wedding were untrue, and it was in fact the Duchess of Sussex who cried.

“There was no confrontation,” Meghan said.

She declined to discuss the incident further because Kate had apologized to her. “I don’t think it’s fair to her to get into the details of that,” Meghan added.

Harry said the decision to step back has had financial consequences — they were cut off by the palace in early 2020 — and affected his relationship with his family. He said his father, Prince Charles, who is next in line to the throne, briefly stopped taking his calls.

“I feel very let down because he’s been through something similar. He knows what pain feels like. And Archie is his grandson,” Harry said.

Harry also described his relationship with his older brother, William, as “space,” but added “time heals all things, hopefully.”

Meghan struck a positive tone at the end of the interview. She said life after the royal family is “just the beginning” for their family.

When asked by Winfrey if her story with the prince has a happy ending, Meghan answered unequivocally.

“(It’s) greater than any fairytale you’ve ever read,” she said.

CNN will soon launch Royal News, a weekly newsletter bringing you the inside track on the royal family, what they are up to in public and what’s happening behind palace walls. Sign up here.