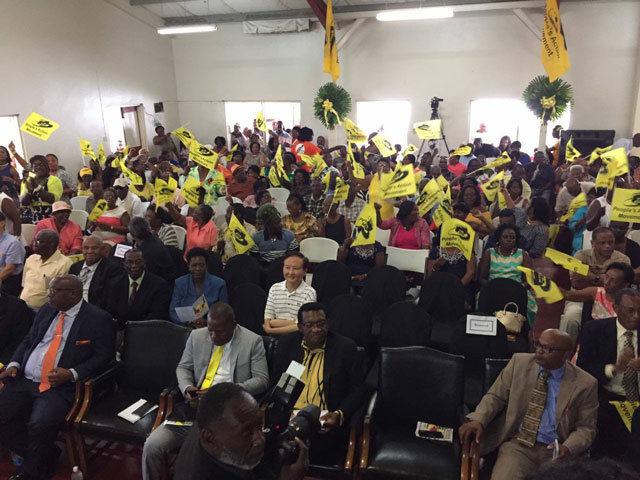 Basseterre, St. Kitts-Leader of the Peoples Action Movement (PAM) Shawn Richards says empowerment of people and their development is still the government’s major aim while they are in office.

Mr. Richards speaking at his party’s convention on Sunday at PAM Headquarters referenced the party’s mantra of “Putting People First’ and made a commitment to focus on empowering people.

“If our nation is to boldly face a future with hope it must do so knowing all of its citizens are being provided for. All must be allowed access to the treasures of the national pie,” he said.

Richards ,who is also the Deputy Prime Minister, stated that any vision they have for the country must be backed up by policy and programs that lead the empowerment of people.

“For all of us poverty must be an enemy because poverty is the greatest hindrance to empowerment,” he said.

The PAM leader also indicated that there should also be greater access to housing.

“Thankfully on all of these issues, we have seen progress and blueprint for a new way forward. The last two years have seen all people advancing in areas of economic growth.”

Richards stated that the government will continue to give priority to various social programmes that deliver meaningful and tangible benefits.

“These benefits have improved the lives of those who were once helpless and defenceless.”

He added that as the move forward they will continue to cast a solid foundation for the future successes of St. Kitts and Nevis.

“As we build momentum this party, this government and this leader must do his part to safe guard the interest of the most vulnerable groups in our communities,” he stated.

Richards noted that one such groups is women, whom he claimed are being strengthened by the government in the federation.

“No one in this room can disagree that when women are empowered, families are emboldened and are better able to prosper, enhancing the quality of life for many,” he said.

“The international organization known as FINCA, has always made the case that when women are empowered to work and create their own businesses through access to finance, education and jobs, families improve their quality of life. “

Richards also touted some of the government’s achievements such as the removal of VAT from food and medicine, re among others and slammed those who have criticised their accomplishments.

“Every time we do something for the poor what do they do they criticize,” he declared.

“We in P.A.M and the government are focused on keeping our social contract with the people. Everyday under this government, new possibilities are unfolding for our people,” he said.