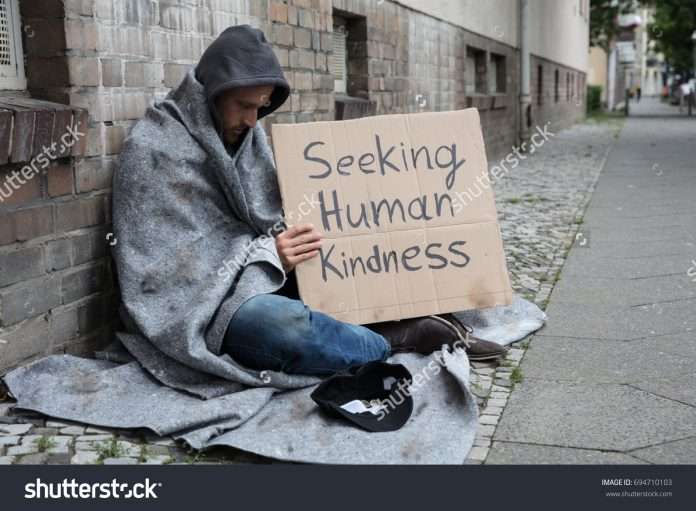 Deep job losses and benefits lags have meant an increase in homeless Americans, and shelters have struggled to keep up 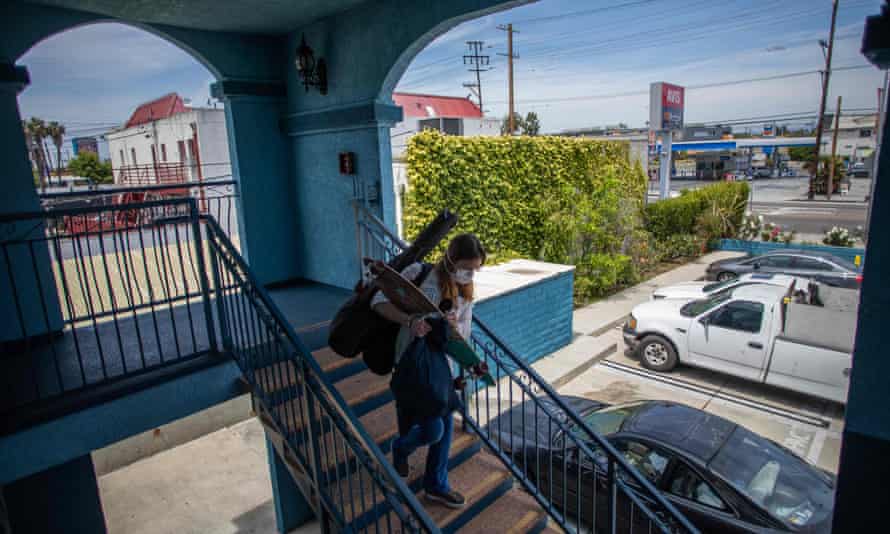 A motel provided to homeless people in Venice, California. A report in January warned homelessness could increase by twice as much as during the 2008 recession. Photograph: Apu Gomes/AFP via Getty Images

Michael Sainato
Rick Temple and his 15-year-old son were living in a room in his work office in Bakersfield, California, before the coronavirus hit in March last year, where Temple, 51, worked as an independent contractor as a dispatcher for freight cargo. But he quickly lost his job and the room, and has relied on unemployment benefits ever since.
When he first applied for unemployment, it took a couple of months before his benefits started, and from November to January he experienced a lag in benefits as well due to a fraud hold which meant he needed to submit new paperwork before his benefits resumed.

While relying on unemployment, Temple and his son have struggled with homelessness, living out of their car and renting motel rooms when they can afford to do so. His son has attended school virtually since the pandemic began.

“Being poor and homeless is very expensive. My credit score is trash now. Being unemployed, I can’t pay for much of anything, let alone three months’ worth of rent to get an apartment,” said Temple. “I have to live in the car and scrounge by, doing whatever I can to eat. I’ll get a $3 Whopper off a coupon app, have the one meal and go as long as I can.”

Homelessness has been a significant problem in America during the pandemic. Homeless people are at significant risk for coronavirus, and these populations have almost certainly grown amid mass job losses. After the 2008 economic recession, US cities experienced significant increases in homeless populations, estimated at 3% between 2008 and 2009.

According to a report this month provided to Congress by the US housing department, 580,466 Americans experienced homelessness on any given night in 2020, a 2.2% increase from 2019. Rates of unsheltered individuals increased by 7% and chronic homelessness increased by 15%, based on surveys conducted before the pandemic in January 2020.

A report in January by non-profit research organization Economic Roundtable warned homeless population increases would be twice as high as the increases experienced after the 2008 recession.

“Most jurisdictions feel that unsheltered homelessness has gone up,” said Nan Roman, president of the National Alliance to End Homelessness. “It could be that they’re just more visible, but the sense is that it’s growing.”

When the pandemic began, Temple struggled to find a parking lot where he could sleep in his car, often switching between parks and parking lots at Home Depot and Walmart, before getting kicked out by police or security. A church found him and his son and gave them permission to sleep in the church parking lot. They have avoided the local homeless shelter because of coronavirus concerns; it is held in a warehouse, and Temple has spent years without health insurance or being able to afford to see a doctor.

“One of the things that I don’t like is, especially during the pandemic, the choices they gave us,” Temple added. “I’m not sure where we go from here.”

When the pandemic began, Temple struggled to find a parking lot where he could sleep in his car

Based on community surveys from the National Alliance to End Homelessness, homeless systems are continuing to experience staffing shortages, shortages of hotel or motel spaces, and shortages of permanent housing to meet the needs of homeless people. Community leaders expressed concerns about anticipated increases in unsheltered homelessness of Americans without new funding for homeless resources.

Coronavirus outbreaks overwhelmed homeless shelters in places like Los Angeles, and other cities have continued sweeps of homeless encampments despite CDC guidance not to do so unless housing units are available for the homeless.

In Dallas, a woman who requested to remain anonymous has lived in her car since November after escaping domestic violence at home. A significant portion of US homeless people identify as domestic violence survivors.

She says she spends the majority of her time trying to find day passes for local gyms to be able to shower, or going to a local library to charge her phone and use the internet. If she can’t find free food, she relies solely on fast-food dollar menus, and buys a $1 large soda from McDonald’s every day to have a cup to use to pee in.

“It’s like solitary confinement with windows,” she said. “Most people have a support system. I have no one. Everyone thinks everyone has someone, but some people have no one.”

Although a federal eviction moratorium has been in place since 4 September, holes in the moratorium and a nearly six-month delay in enacting one have meant that thousands of evictions have been carried out during the pandemic, and homeless shelters have struggled to keep up with increases in demand while trying to mitigate Covid outbreaks. The ban is currently set to expire on 31 March.

According to Princeton’s Eviction Lab, over 260,000 evictions have been filed during the pandemic in the five states (Connecticut, Delaware, Missouri, Indiana and Minnesota) and 27 cities tracked by the lab.

Austin Valentine, 19, was attending East Tennessee State University as a freshman undergraduate student this year, but recently became homeless because he was unable to pay his tuition and room and board fees after student loans, because he lost his food-service job. He’s now living in a motel in Pigeon Forge, Tennessee.

“I got kicked out on 12 February,” said Valentine. “Now I’m living in a $200-a-week motel room that’s covered with bedbugs and cockroaches, and no electricity, little heat, and just cold water.”

He’s currently looking for a second job, as the recent restaurant job he started doesn’t provide enough hours. His search has been difficult because the hospitality and tourism industry in eastern Tennessee has been hit hard. He started a GoFundMe campaign to try to raise funds to move into an apartment.

“No one’s really hiring at the moment,” added Valentine. “I’ve been working, [and] trying to save up as much money as I can so I can get out of this situation.”