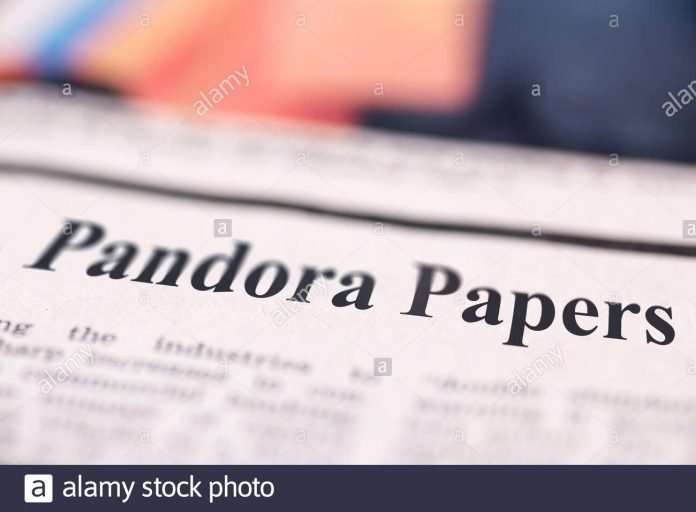 A massive leak revealing the secret assets of some of the world’s most powerful figures is putting new pressure on global leaders to crack down on shadowy finances.

The so-called Pandora Papers consist of millions of leaked financial documents that were reviewed and analyzed for two years by more than a hundred news outlets, including The Washington Post and the BBC, that are part of the International Consortium of Investigative Journalists (ICIJ).

The trove illustrates the secretive practices that world leaders and wealthy individuals have employed to keep their assets hidden in dozens of countries, including the United States.

Here are four takeaways from the Pandora Papers.

South Dakota was spotlighted in the investigation as a leading offshore tax haven that’s been used by current and former world leaders over the years.

There were 81 trusts uncovered in South Dakota in the sweeping investigation as well 37 in Florida, 35 in Delaware, 24 in Texas and 14 in Nevada.

“The Pandora Papers provide details about tens of millions of dollars moved from offshore havens in the Caribbean and Europe into South Dakota,” the ICIJ said.

The probe found that the family of Carlos Morales Troncoso, the former vice president of the Dominican Republic, began tucking away its assets in trusts in the Midwest state in 2019.

The family of Ecuador’s newly elected president, Guillermo Lasso, also shifted two offshore companies from Panama to trusts in South Dakota in 2017 after lawmakers passed legislation in Ecuador that made it illegal for public officials to use tax havens for shielding their assets. Lasso told the ICIJ that his previous offshore financial activity was been “legal and legitimate.”

The ICIJ reported that state legislation in South Dakota over the years has helped allow for more more secretive investments.

“South Dakota is a trust-friendly state with minor restrictions, making it attractive domestically and globally for legitimate and illicit use,” she said.

A bipartisan group of lawmakers introduced legislation following the release of the Pandora Papers seeking to crack down on financial “enablers” that help foreign clients hide their wealth in the U.S. using shell companies, trusts and other means.

“If we make banks report dirty money but allow law, real estate and accounting firms to look the other way, that creates a loophole that crooks and kleptocrats can sail a yacht through,” Rep. Tom Malinowski (D-N.J.), one of the four co-authors of the bill, said.

The legislation would require the Treasury Department to impose stronger due diligence rules laws by the end of 2023 for “middlemen,” including attorneys who help create limited liability companies for clients who abuse the law.

Ian Gary, executive director of the Financial Accountability and Corporate Transparency Coalition, called the bill a step in the direction.

“Unlike the banking sector, which is highly regulated and has to file suspicious activity reports and do ‘Know Your Customer’ due diligence, these lawyers, investment advisors, accountants … real estate agents, they’re not under those kinds of basic due diligence requirements,” he said.

“That’s why the Enablers Act, I think, is so important,” he said. “Again, the U.S. is behind some other countries and not having any requirements for those industries as well.”

King of Jordan has vast overseas assets, including in US

The investigation found that King Abdullah II of Jordan possessed 14 properties in the U.S. and the United Kingdom in purchases that amounted to more than $106 million.

One of the properties, in California, was purchased for $23 million in 2017 using an offshore company. Though the company was said to be based in the British Virgin Islands, the king also had a second company that served as a nominee director for the initial company.

“In the offshore world, nominee directors are people or companies paid to front for whoever is really behind a company,” the ICIJ said.

The king’s legal team said the purchases were made partly for security purposes.

There were three beachfront properties in Malibu in total that the investigation found the king, whose lawyers also said is not legally obligated to pay taxes in Jordan, purchased through offshore companies.

The king has drawn scrutiny in light of the investigation, as his nation continues to rely on aid from other countries.

The ICIJ linked the king to nearly 40 shell companies created between 1995 and 2017.

“If the Jordanian monarch were to display his wealth more publicly, it wouldn’t only antagonize his people, it would piss off Western donors who have given him money,” Annelle Sheline, a nonresident fellow at the Baker Institute Center for the Middle East, told the ICIJ.

There are also world leaders on the list who have a history of speaking out against corruption and similar offshore dealings used by the wealthy that employ the same practices or have people in their inner circle who do.

Kenyan President Uhuru Kenyatta, who has previously said public servants must publicly declare their assets for transparency, has siblings who owned offshore companies that amounted to tens of millions of dollars, the ICIJ said.

Leaked files also showed Kenyatta was named as a beneficiary to “a secretive foundation in Panama,” the group said.

The Pandora Papers were released by the same group behind the 2016 Panama Papers investigation, which was based on leaked offshore financial documents from a law firm in Panama that illustrated how thousands of clients, including world leaders and celebrities, used practices such as tax havens and shell companies to conceal their wealth.

The Pandora Papers, however, were centered around an even more robust investigation, sourcing documents from 14 offshore services firms across the globe that experts say provide a much wider look into an intricate underground system.

The ICIJ said its probe has exposed “financial secrets of 35 current and former world leaders, more than 330 politicians and public officials in 91 countries and territories” in addition to fugitives, con artists and murderers.

Prominent leaders named in the investigation include King Abdullah II of Jordan, former British Prime Minister Tony Blair, and the presidents of Ukraine, Kenya and Ecuador. The probe has also detailed some in the inner circle of Russian President Vladimir Putin.

Though the group noted in its investigation that holding assets offshore or using shell companies for security purposes is legal in many countries, some advocates have urged for more regulation around the practices, which they note can also be misused for tax evasion or corruption.

Gary, with the Financial Accountability and Corporate Transparency Coalition, said the probe shows there is a “massive system of financial secrecy operating around the world.”

“It’s really validation that the Panama Papers wasn’t just a one-off situation,” he said, adding that the investigation indicates there are “two separate financial systems that are operating in the world.”

“One, which is people like us follow the law and pay taxes, and another one for some of the global rich and political elites who have been identified in Pandora Papers who are able to use financial secrecy to hide their assets overseas to avoid paying taxes,” he added.