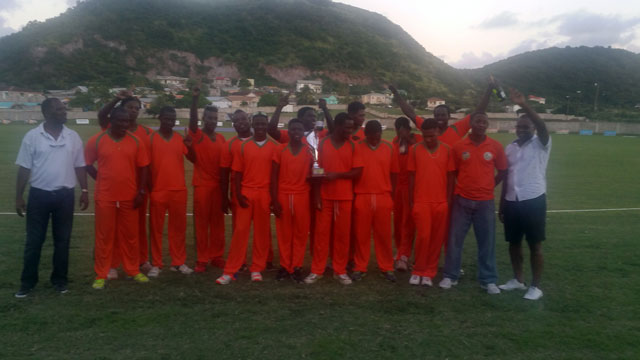 The Government Road Pennyless All Stars out of Nevis have been crowned champions of the Keith Arthurton Windsor Nagico after a six-wicket victory over Newtown in the finals played at Conaree Cricket Ground on Sunday Dec. 4.

After beating Empire Cricket Club on Saturday to earn a berth in the final, Newtown batted first andwas left reeling at 6-4 as All Stars fast bowler Keon Pemberton scuttled out the Newtown top under.

However, a Newtown recovery came from two experienced heads, Steve Liburd and Jason Saddler, who arrived at the crease with their teams in danger and counter attacked the bowlers as they put on a 100 run partnership to steer their side out of danger.

Liburd was the main aggressor as he made 74, while Saddler finished with 33 as Newtown finished their 20 overs on 150-8.

Pemberton, who was last week selected for the West Indies U19 side, finished with an impressive five wickets for 11 runs.

Needing 151 for victory, All Stars innings got off to the worst start possible when they lost Jaimie Cornelius first ball to Liburd. It could have even gotten worse when his replacement Saeed Williams was dropped in the outfield two balls later.

However, Williams capitalized on the dropped along with Ross Powell as they put to the sword the short-handed Newtown regularly maintaining scoring rate over 10 runs per over well above the 7.5 needed to reach the target.

Williams took responsibility to do the bulk of the scoring while Powell seemed content to play second fiddle in the partnership that took the game away from Newtown.

The Newtownteam got a glimmer of hope when their captain Kevin Hanley removed both Williams for 55 and Powell for 34 in the same over. That however brought the experienced Willet brothers Tonito and Akito to the crease and set their ship back on course.

Tonito, however, fell to an unplayable delivery from Elsroy Powell, but Akito put on a hitting display of the highest quality to guide his team successfully to their target.

Permberton was named man of the match for his bowling performance while Newtown’s Elsroy Powell finished the tournament on top of both of the bowling and batting rankings.

St. Kitts Cricket Association PresidentDennis Phillipcongratulated the winning side and described the second staging of this tournament as a success.

Phillip was disheartened by the lack of support the tournament received from the general public.

“One of the main reasons is the absence of the other teams who took part in the tournament and didn’t show up…and I really want to see some improvements in that,”Phillipcommented.