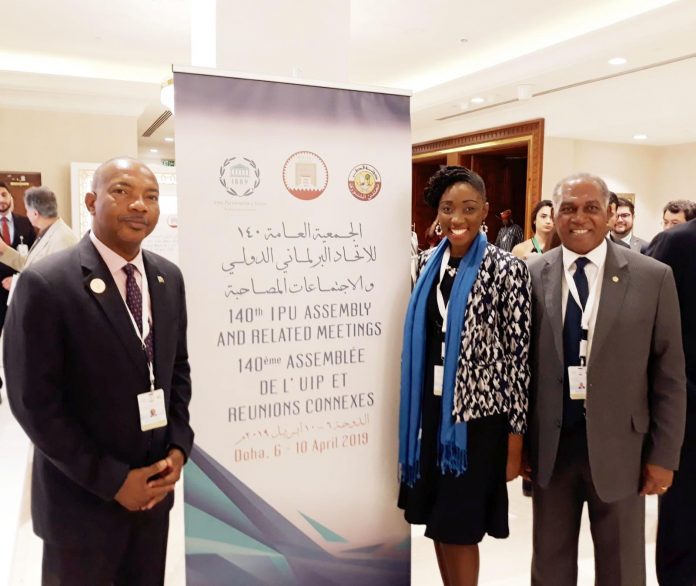 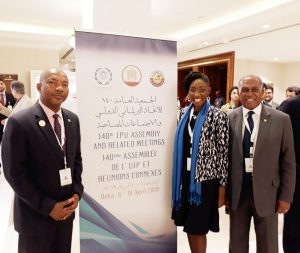 
The theme for the General Debate of the Conference was: “Parliament as platforms to enhance education for peace, security and the rule of law.” Over 2200 delegates representing 162 national parliaments were in attendance at the Assembly, included over 700 parliamentarians and some 80 Speakers.

The IPU is a global organization made up of 178 Member Parliaments and 12 Associate Members.  The organization works closely with the United Nations (UN) to protect and build global democracy, through political dialogue and concrete action.

The St. Kitts-Nevis delegation attendance came as a result of an invitation extended to it by the  Secretary- General of the IPU, Mr. Martin Chungong and was fully funded by the parliament of Qatar.

As part of the activities held during the Assembly, there was a bilateral meeting between Secretary General Chungong and a Speakes’ Dialogue Forum, which had as its theme: ”Low trust in Democracy: An urgent call to rethink our governance model.” In the meeting with Secretary General Chungong, amongst the matters discussed, was an invitation for St. Kitts and Nevis to become a full member to the IPU.  It was agreed by all that this – among other benefits – would allow the Federal Parliament to receive parliamentary support, as it works towards enhancing the way business is conducted in the Parliament.

On the margins of the Assembly, Senior Minister Amory met with representatives of the Qatar Fund for Development (QFFD) and discussed the possibility of St. Kitts and Nevis accessing this organization for funding to assist with the further development of education, health, infrastructure and agriculture sectors.

The delegation also participated in a Meeting of Small Islands Developing States (SIDS), where discussions focused on the actions being taken by countries to minimize the harmful effects of climate change on the livelihoods of the people and the status of the implementation of the Sustainable Development  Goals (SDGs) in each  island, Speaker Perkins made a commitment to have the SKN Parliament become more involved and focused  on this issue by encouraging our parliamentarians  bringing the matter into parliamentary discussions.

According to the Speaker, of the National Assembly, A. Michael Perkins, “The participation of the Federation of St. Kitts and Nevis is important because it provides an opportunity for the country to lend its voice to critical discussions regarding major issues confronting not just our Federation, but also Caribbean region and the global community.”

He expressed appreciation of the opportunity that was afforded the delegation meet counterparts and colleagues from our region, including delegates from Antigua, Barbados, St. Vincent and Trinidad and Tobago, all of whom had accepted the IPU’s invitation to attend IPU 140.