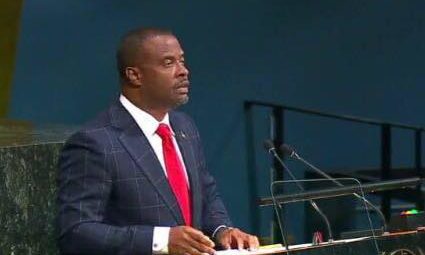 What does it take to be Person of the Year?”  At the “St. Kitts and Nevis Observer” it’s someone such as Nevis’ new Premier the Hon. Mark Brantley. He’s only been leading his party for two months, has just won a landslide assembly election victory for his Concerned Citizens Movement (CCM) and says building the economy while fighting crime through technology will be two major priorities.

And Premier Brantley, at 48, who also serves the Federation Team Unity Government as Minister of Foreign Affairs and Aviation, has hit the ground running with plans for to revitalise industry creating new jobs and opportunities for young people, while trying heal the political divisiveness in the Nevis Assembly.

As he explained, “We have an excellent platform on which to build. The Hon Vance Amory, our former Premier and Leader of the CCM, has left a rich legacy of service. Our main challenge will be to heal the political divisiveness in our  society by ensuring that everyone has a place and everyone will be able to access opportunities for advancement and development.

“I propose and administration that would be inclusive. Whilst it is the nature of our politics that it is divisive and partisan, I believe the campaign is now over and so, it is important that with the campaign being behind us that all Nevisians now hold hands and come together and try to do our very best to develop our island.

We Are Not Enemies

“The CCM is a great party but the CCM does not have a monopoly on ideas. The Nevis Reformation Party (NRP) is also a great party but on this occasion, they did not find favour with the electorate. We are not enemies. We are all Nevisians. Perhaps different personalities and perhaps different ideas as to how we take our island forward but nevertheless, we are all Nevisians, equally committed to the best Nevis that we can have.

But Brantley knows tourism and farming may not be enough for a better future on Nevis. He sees a more diverse economy. “We must expand our economy. We will encourage more small and micro businesses by providing seed capital at a nominal two percent interest.

“We must grow our economy and empower our people to control the commanding heights of our economy. Our task will be to motivate our people especially our youth to dream big dreams and work hard to achieve this.”

“There is much that can be done in Agriculture to ensure greater food import substitution. We also must revamp and relaunch our financial services industry whilst continuing the investment in tourism promotion and renewable energy. We are confident that with geothermal energy, a new and exciting economic dawn awaits Nevis.”

Yet, the darker side of Nevis is a growing crime rate. The Federation as a whole by the latest statistics has the third highest per capita murder rate in the Caribbean, behind USVI and Jamaica. And Nevis, with eight murders this year, is per capita more dangerous than St. Kitts. On this subject Brantley seems to play both the good cop and bad cop. As he says,  “Crime is a social problem and we must confront it and eradicate it from our midst.

“Our approach must continue to be a robust one where the iron fist of law enforcement is encased in the velvet glove of opportunity. The miscreant few must understand that Nevis wants them to play their role as good citizens contributing to our development but if they prefer a path of criminality then law enforcement will have to do it’s part. This new government will focus more heavily on technology including CCTV to deter and detect crime. It is and will continue to be an urgent priority.”

The Caribbean has become a highly competitive region internationally and in international politics. That’s largely because relatively small island nations have clout in numbers at the United Nations. For example, recently a delegation from Romania visited Antigua offering 20 student college scholarships in its bid to win over support for membership to the UN Security Council.

Brantley, from a humble childhood,  is an example of what determination with goal in mind can accomplish, a key aspect for a Person-of-the-Year.

Mark Anthony Graham Brantley was born on 11 January 1969 to a single, struggling mother Cynthia “Vicky” Williams He was one of four children. His father, Irving Brantley, was living in the United States but supported the family financially as best he could. Mark spent his early life in a modest home in Hanley’s Road, Gingerland, Nevis.

Brantley began his academic career at the ‘Chapel School’ at the Methodist Church in Gingerland, and thereafter moved on to the newly built Gingerland Primary School (now Joycelyn Liburd Primary School). He went on to the Charlestown Secondary School, followed by a two-year stint at the Nevis Sixth Form College.

His legal career began when he returned to Nevis, and for one year functioned as the Legal Counsel for the Nevis Island Administration. He then joined Simeon Daniel to form the Daniel, Brantley & Associates law firm. He is currently a Member of the Bar in St. Kitts-Nevis, Anguilla, Grenada and Antigua and Barbuda.

After a succssful career in law at 37 Brantley took a leave of absence from the bar to launch a career in politics by becoming a member of the Concerned Citizen’s Movement.

In 2007, he defeated Hensley Daniel in the bi-election occasioned by the death of Hon. Malcolm Guishard to secure his first seat in the Federal Parliament. The seat came with the title of Leader of the Opposition in the National Assembly. In January 2010, he again defeated Daniel and was returned to Parliament as Opposition Leader.

Prior to the 2015 General Election, Brantley was the Deputy Premier and Minister of Tourism, Health, Culture, Youth, Sports, and Community Development of the Nevis Island Administration. He also serves as the Leader of the Opposition in the National Assembly of the Federation of St. Kitts and Nevis.

Following the Team Unity victory in the 2015 General Election, Brantley was appointed Minister of Foreign Affairs and Aviation on 22 February 2015.

On 19 December 2017, Brantley was sworn in as Premier of Nevis following the CCM’s victory in the Nevis Island Assembly Election on 18 December 2017. Add all this together and you have the  “Observer’s” 2017 Person-of-the-Year. Congratulations Premier Brantley and  ‘bonne chance’  in 2018.