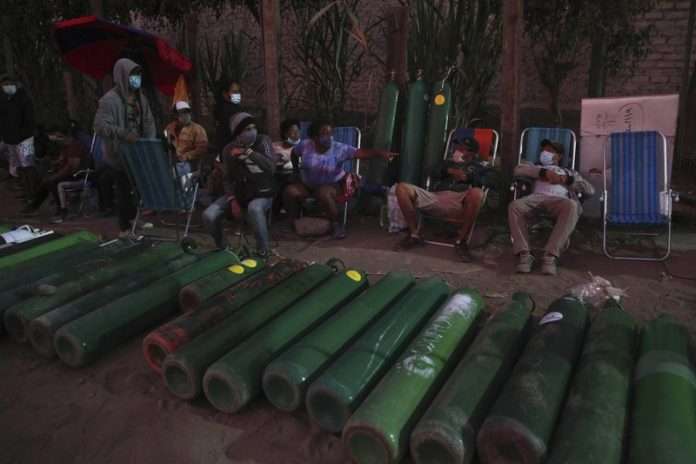 LIMA, Peru (AP) — Public indignation over secret coronavirus vaccinations for the wealthy and well-connected in Peru grew Wednesday, a day after the Vatican’s ambassador to the South American nation admitted he was inoculated ahead of health care workers and the poor.

The surreptitious vaccination of nearly 500 people, including a then-president, his wife and brother, has roused anger over inequality in a country that has been badly battered by the pandemic, which has taken the lives of at least 310 doctors.

Doctors and nurses in an impoverished neighborhood in the capital of Lima on Wednesday protested the secret vaccination effort and hung signs from the windows of a hospital’s intensive care unit that read, “Getting a vaccine is our right.”

The city’s archbishop, meanwhile, criticized the Vatican ambassador for accepting the vaccine.
Archbishop Carlos Castillo said on state television that he had contacted Pope Francis’ representative, Nicola Girasoli, and told him that he is part of a “list of privileged people who have acted behind the backs of the life of the people, of the suffering of the people. It is a list of unsupportive people.”

Girasoli, a 63-year-old Italian, confirmed in a statement Tuesday that he was vaccinated while serving as a consultant on “ethical issues” related to the Phase 3 trial that the Chinese state pharmaceutical company Sinopharm carried out in Peru starting in September.

The 487 people who received secret inoculations with the Chinese vaccine were not part of the 12,000 volunteers enrolled in the clinical trial to determine the vaccine’s efficacy before it began to be officially rolled out to the public.

The diplomat received his second dose on Feb. 11, a day after the press revealed that former President Martín Vizcarra, his wife and brother had been vaccinated in October while his administration was negotiating the purchase of the vaccines.

Vizcarra was removed by congress in November for alleged corruption in an unrelated case.

Girasoli has been apostolic nuncio in Peru since 2017 and worked in the diplomatic service of the Holy See for 36 years.

Pope Francis has repeatedly said the rich should not get priority for the vaccine. In a speech in August, he said it would be sad if “vaccine priority is given to the richest.”

“The pandemic has laid bare the difficult situation of the poor and the great inequality that reigns in the world,″ the pope said. ”And the virus, while it doesn’t make exceptions among persons, has found in its path, devastating, great inequalities and discrimination,” Francis said, adding “and it has increased them.

Peru has bought 1 million vaccines from Sinopharm, but they are not enough to inoculate the group deemed high priority — some 1.1 million doctors, nurses, police, firefighters, streetsweepers and others.

Foreign Minister Elizabeth Astete, Health Minister Pilar Mazzetti and two vice ministers involved in the country’s response to the coronavirus pandemic have been forced to step down in recent days. Astete acknowledged in her letter of resignation Sunday that she had secretly received the shot in late January, adding that “I could not allow myself the luxury of falling ill.”

Meanwhile, Mazzetti frequently lied in front of television cameras, including days after receiving thousands of vaccines bought from Sinopharm, when she said she was going to be the last to be vaccinated because “the captain is the last to leave the ship.”

The Andean nation has tallied more than 1.2 million cases of coronavirus and 44,056 deaths, according to Johns Hopkins University in the United States.′