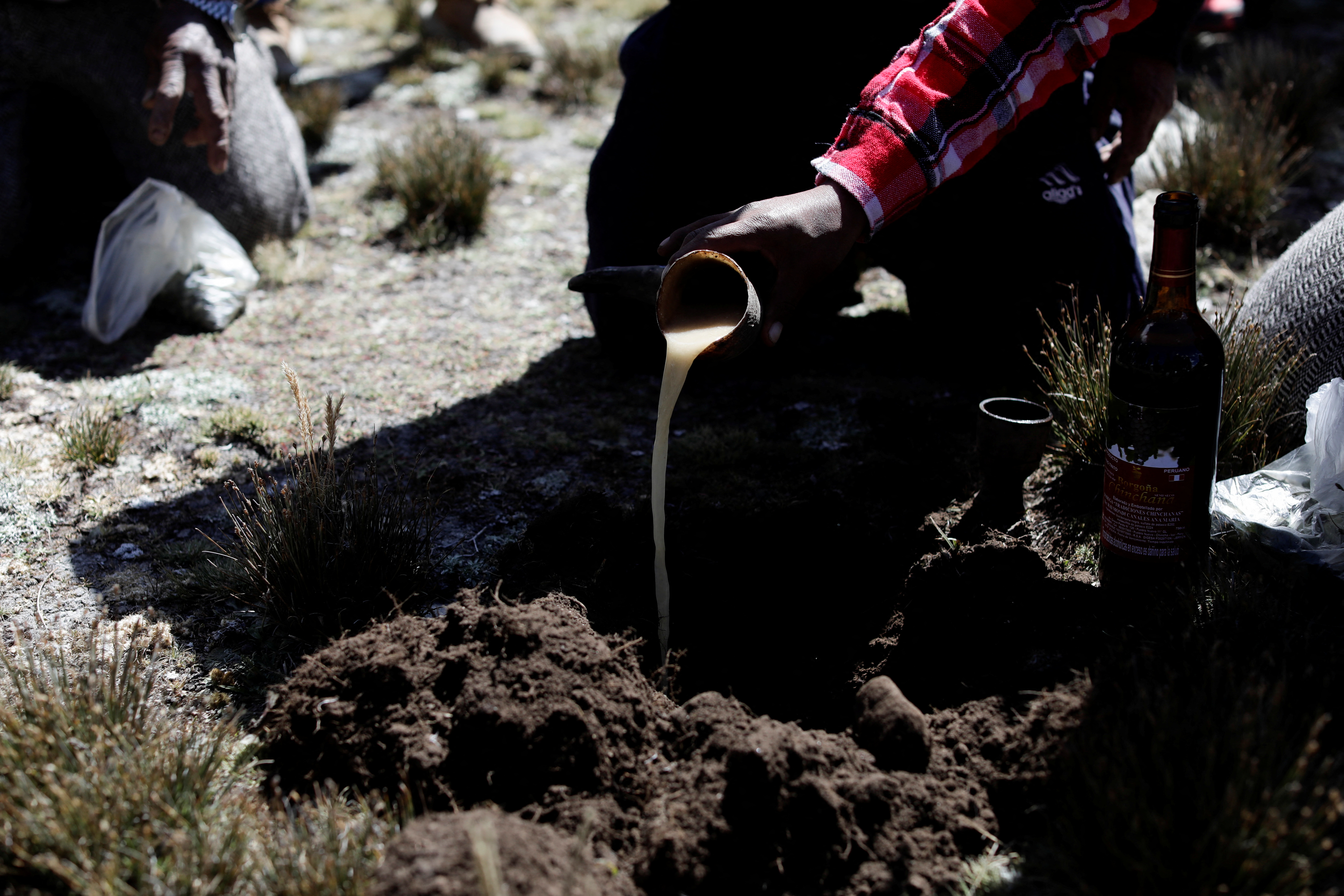 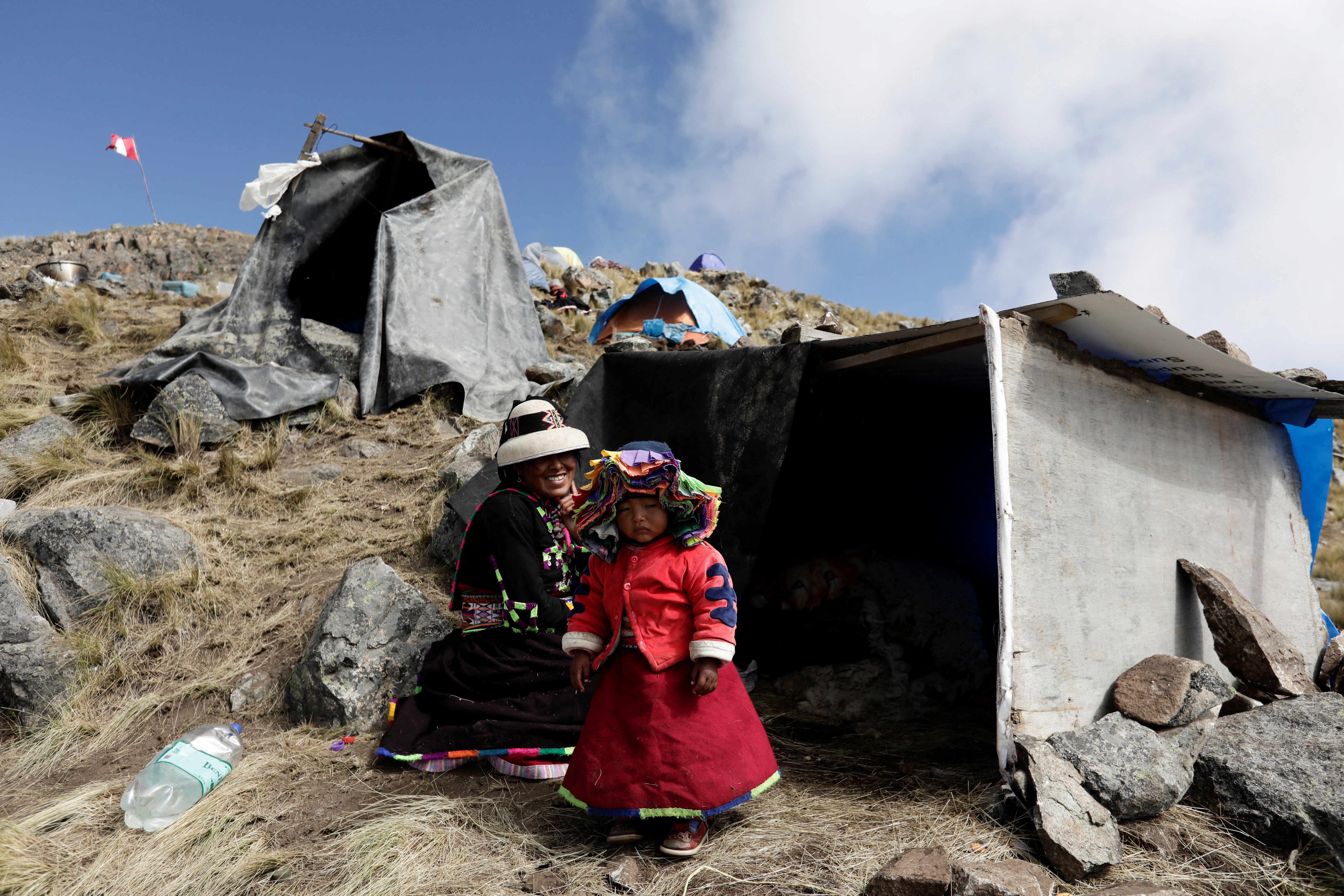 Members of the indigenous community of Huancuire camp near the Las Bambas copper mine as part of a protest to demand the land they call ancestral lands, to be returned to the communities, in Apurimac, Peru May 9, 2022. REUTERS/Angela Ponce

Now the community wants the land back.

In mid-April, more than a hundred Fuerabamba community members stormed the Las Bambas mine and pitched tents near the open pit, forcing a halt in production at a site that provides 2% of global copper supplies. They were joined by the nearby Huancuire community, which was protesting a planned expansion of the mine on their former land.

An attempt in late April by the mine’s Chinese owner MMG Ltd (1208.HK) to remove the camp led to clashes in which dozens of people were injured and failed to end the protest. Copper production – worth $3 billion a year – remains suspended, with no restart in sight.

The Fuerabamba members were evicted but the Huancuire community remained in place – and the two groups have formed an alliance to bargain with the government and the mine.

Las Bamas acknowledges that 20% of its obligations under the resettlement agreement are outstanding, including the purchase of new lands for the community.

While Fuerabamba’s leaders had initially called just for Las Bambas just to fulfill its commitments, tensions have flared since the failed eviction.

“We’re going to keep fighting until Las Bambas shuts down and gets out of here for good,” Edison Vargas, the president of the Fuerabamba community, told Reuters. “It’s war.”

The protest is the most severe crisis Las Bambas has faced since opening in 2016, calling into question the future of one of the largest investments ever made in Peru, the world’s No. 2 copper producer, industry experts say.

The mine, which still has over a decade of planned production remaining, has faced road blockades in recent years by communities further away that have hit its production. But the invasion marks a major escalation as well as the potential unraveling of Peru’s most expensive community resettlement scheme, amid a resurgence in South America of protests against mining projects.

Some 1,600 members of the Fuerabamba community were relocated by Las Bambas in 2014 to a purpose-built village with tidy rows of three-floor homes near the mine. The community approved the move, which came with $300 million in cash payouts, according to the company.

A Reuters reporter who visited Las Bambas in late April saw community members, including women and children, rebuilding adobe houses there and grazing cattle against the mine’s open pit backdrop. Residents of Fuerabamba and Huancuire said they would not abandon demands for the return of what they called their ancestral lands.

They face long odds, according to former government officials and advisors. Both communities received substantial payments from Las Bambas in exchange for the land they now want back.

Executives at Las Bambas – which is 62.5%-owned by MMG, the Melbourne-based unit of state-owned China Minmetals Corp – say the protests are illegal and have called on authorities to enforce the rule of law. The company declined requests for comment for this story.

On Tuesday, as the stoppage entered a third week, Peru’s government failed to broker a deal in talks at Las Bambas with the communities, as the two sides traded accusations of violence.

Edgardo Orderique, chief executive for operations at Las Bambas, said Fuerabamba and Huancuire members had destroyed tens of millions of dollars of equipment and injured 27 security personnel during the clashes late last month. Vargas said a Fuerabamba member had lost an eye in the violence.

The protest underscores the depth of the challenge facing Las Bambas as it proceeds with plans to increase annual copper output from 300,000 to 400,000 tonnes amid a spike in global copper prices.

“This protest is the most serious that Las Bambas has faced since it began operating in Peru,” said Ivan Merino, a former mining minister under Peru’s embattled President Pedro Castillo, whose government has been torn between its pledge to uphold the rights of rural communities – the bedrock of its support – and the need to revive the economy.

“The State does not have the control to resolve the conflict,” said Merino.

Peru’s mining ministry did not respond to multiple requests for comment.

THE FACE OF PROGRESS

In the main square of New Fuerabamba, the town that Las Bambas built, a plaque says the settlement is the durable “face of progress and hope”.

Close to a dozen residents, however, said the abrupt transition from rural living to town life had caused trauma and mental health issues. Reuters was not independently able to confirm this.

The residents cited simple problems like the new brick houses – which have electricity and indoor plumbing – do not keep out the cold of the chill Andean nights as well as their former adobe homes.

Residents have also complained that basics like water, food and fuel – which the rural community was previously able to glean from the land – must now be paid for. Many of them no longer plant crops or tend livestock because the replacement plots provided by Las Bambas are too far away.

“The problem is that sustainable development has not been achieved,” said Paola Bustamante, a director at Videnza, a consultancy, who previously served as Peru’s top official in charge of social conflicts at Las Bambas.

“What has been done is they were given some money and that’s it.”

As part of the resettlement agreement, Las Bambas gave one job per family at the company for the life of the mine. The company also said in a 2021 presentation that health and education levels have also sharply improved, particularly in young children.

Three residents told Reuters that some members of the community had already spent their payouts. The resettlement plan, which MMG inherited when it bought the mine from Glencore Plc (GLEN.L) in 2014, gave Fuerabamba’s people cash settlements the mine says averaged $500,000 per family.

Either way that’s a huge sum in a country where the legal annual minimum wage is $3,300.

“For us, it seemed like a lot of money, endless money,” Dominga Vargas, a lifelong resident of Fuerabamba, told Reuters from the tent camp at Las Bambas before the eviction. “But now it has all run out and we don’t have anything left.”

“How could we not regret selling,” she added.

The government gave MMG permission to expand the mine in March. Fuerabamba chief Vargas said Castillo’s administration turned a deaf ear to his warnings of a brewing crisis and a request for mediation before the occupation took place.

In a March 28 letter seen by Reuters, Vargas warned the mining ministry of a “critical situation” at Las Bambas. He told Tuesday’s meeting that he also went to the capital Lima to ask the government to intervene in the dispute, without success.

On the day of the attempted eviction, April 27, the government declared a state of emergency in the area, suspending the civil rights to assembly and protest.

The government said in a statement following the eviction attempt that it had supported dialogue between the parties from the beginning.

Under Peruvian civil law, property owners can attempt to evict trespassers by force during the first 15 days after they have settled in the property. If that time period lapses, then they need to go through a lengthier legal process.

In the wake of the clashes, Vargas wrote to Las Bambas management saying that further attempts to restart mining operations would be considered a “provocation” by his community and could trigger more violence, according to a separate April 29 letter seen by Reuters.

“Las Bambas won’t restart, not a single gram of copper will leave from here,” he told the meeting on Tuesday.

The Huancuire community, which also sold land to Las Bambas a decade ago for $33 million that is now key to the expansion project, is demanding more benefits from the minerals under the ground.

Pablo O’Brien, a former adviser to several Peruvian governments including Castillo’s, said the communities were pushing their luck making new demands given the large previous payouts.

“This situation is really just open extortion,” he said. “They cannot complain that they have not benefited financially.”

Community leaders denied the protests were a shakedown.

“As an indigenous community, we need to make ourselves heard because the government has issued this permit without consulting us,” said Romualdo Ochoa, the President of Huancuire.

Under Peruvian law, citizens don’t own mineral wealth underground and the land was already formally sold, Ochoa acknowledged. But he said indigenous communities have special rights because of their long ancestry in the territory: “What’s under our soil still belongs to us.”