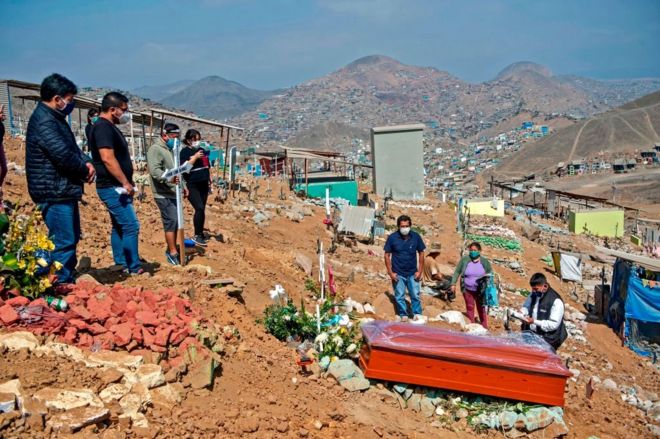 BBC- Peru imposed one of the earliest and strictest lockdowns in Latin America to stop the spread of coronavirus – but it now has the sixth-highest number of confirmed cases in the world.

Peru’s President, Martín Vizcarra, says things are improving but has previously said results of the lockdown “haven’t been exactly what we expected”.

So why has Peru been affected so badly?

The lockdown in Peru started on 16 March – before the UK and some other European countries.

The county’s borders were shut, curfews were imposed, and people could leave their homes for essential goods only – but infections and deaths continued to rise.

Peru’s lockdown has been extended until the end of June – making it one of the longest in the world.

Daily reported cases are now falling – but the number of deaths remains high.

Officially, about 8,500 people have died with coronavirus in Peru.

But the country has one of the world’s highest excess death rates – the number of deaths above the average in previous years – which suggests the impact far exceeds official figures.

Between 16 March and 31 May, the latest comprehensive data available, the number of overall deaths in Peru was 87% higher than what would be expected in a normal year, according to BBC News analysis.

Why have measures been ineffective?

Peru has reported more cases than every European country apart from the UK, despite testing only about six people in every 1,000 – more than some countries in Latin America but far fewer than Italy, for example, which has tested about 80 in every 1,000.

Experts say Peru’s healthcare system was underprepared, leading to more deaths, but several other social and economic factors can help explain why Peru is struggling to contain the outbreak.

We have looked at four of these.

More than 40% of households in Peru do not have a refrigerator, according to a 2020 government survey.

Many households “do not have logistics that allow them to stock up on food for many days”, Peruvian economist Hugo Ñopo says.

“They have to go out to stock up frequently and especially go to the markets,” he adds

President Vizcarra said the country’s markets were “the main sources of contagion”.

And at the La Victoria fruit market in Peru’s capital, Lima, for example, 86% of vendors had the Covid-19 virus in May, according to official statistics.

“You would buy, you would get infected, you would go home with the virus, and you would spread it to the whole family.”

And this was exacerbated by restricted opening hours making markets more crowded, according to Peruvian social researcher Rolando Arellano.

The government has now reorganised the markets to control the spread.

But experts say authorities were too slow to address the risks.

About 70% of the employed population in Peru work in the informal sector, which is one of the highest rates in Latin America.

These jobs are by their nature unpredictable and often in environments making social distancing difficult.

“Peruvians who went out to work had to use public transport, and to sell goods in very crowded markets,” says Mr Ñopo.

“Another big problem that we have is reaching people to deliver aid,” he said.

“It would be so easy if everyone had a bank account.”

Peru allocated up to 12% of its gross domestic product (GDP) – the value of goods and services produced – to help people who lost their jobs and companies that lost income because of the lockdown measures.

But only about 38% of Peruvian adults have a bank account, making digital payments largely impossible.

And many of the unemployed had to go to the banks in person to collect their benefits, causing large queues.

The government has now extended banking hours, to stop groups of people gathering.

Some officials have also noted the lack social distancing in public places.

The Peruvian Defence Minister, Walter Martos, said: “The police and the armed forces will not tire of working in the streets, markets, banks and bus stops to help create this new culture of respect for the rules to learn how to live with the virus”.

And as the economy begins to reopen, Mr Arellano says, it will be necessary to “educate on distancing amongst citizens and improve marketing, transportation, and other systems to facilitate distancing”.