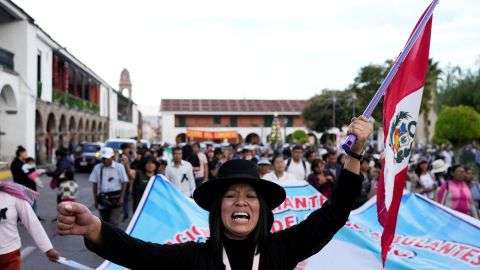 - Advertisement -
By Claudia Rebaza, CNN
Angela Ponce/Reuters/FILE
CNN  —  “If something happens to me, don’t cry,” Leonardo Hancco told his wife, Ruth Barcena, the morning of December 15 in Peru’s southern city of Ayacucho.

The 32-year-old taxi driver and father of a seven-year-old girl had decided to join Peru’s nationwide political protests at the last minute.

“If I have decided to join because I want to leave a better future for my children, I’m fighting for my rights,” he added before leaving, according to Barcena.

Demonstrations that first broke out after the ousting of former President Pedro Castillo in December have since continued – largely in central and southern Peru, where Ayacucho is located – fuelled by allegations of corruption in the government and elected officials, as well as anger over living conditions and inequality in the country. Protesters demand President Dina Boluarte’s resignation, the Congress’s closure, general elections as soon as possible and a new Constitution.

The ancient city of Ayacucho, known for its pre-Inca history and colonial churches, has seen dramatic eruptions of violence amid the demonstrations. In this region alone, at least 10 people have died with more than 40 injured, according to the country’s Ombudsman office.

Hancco was one of them. Hours after joining the march, he was shot in the abdomen near Ayacucho’s airport, where protesters had gathered with some trying to take control of the runway.

Demonstrators stand on an airport tarmac amid violent protests in Ayacucho, Peru December 15, 2022.

Protests against the backdrop of history

The storied region of Ayacucho was once home to the Wari civilization and became part of the Inca empire. Its capital, also called Ayacucho now, was one of main cities during the Spanish conquest. It was also the birthplace of one of the darkest and painful chapters in Peru’s recent history, home to the armed rebel group Shining Path during the violent 80’s and 90’s.

According to the final report of the country’s Truth and Reconciliation Commission, almost 70,000 people ultimately died due to the internal conflict between Peruvian security forces and the Maoist rebel group Shining Path (Sendero Luminoso in Spanish), and the Marxist-Leninist Tupac Amaru Revolutionary Movement (MRTA). Both government forces and the rebel groups were accused of human rights violations as they warred. More than 40% of the deaths and missing from this bloody conflict were in the Ayacucho region.

Since then, this region has welcomed local and international tourists, relies on agriculture, mining, and manufacturing of local products. But it still reflects the inequalities of the past. Compared to Peru’s capital Lima, Ayacucho’s health and education system are underdeveloped, with facilities and standards well below those benefitting the capital.

Peru’s crisis is a cautionary tale for democracies

“They say that Peru is doing very well economically, but the pandemic stripped us bare,” Lurgio Gavilán, Professor of Anthropology at the National University of San Cristóbal de Huamanga told CNN.

After almost two decades of sustained economic growth, Covid-19 hit the country hard in 2020, with the highest per capita death toll in the world and more than half of the population lacking access to enough food during the pandemic. Poverty has been particularly insidious in rural areas of the country.

Though the economy has rebounded, with GDP back to pre-pandemic levels, enduring inequality in the country means not all will benefit. The World Bank has forcast that poverty will remain above pre-pandemic levels for the next two years.

Some protesters have called for the freeing of imprisoned ex-President Castillo, a onetime rural teacher who vowed to correct economic inequality before his downfall. But polarization and the chaos surrounding his presidency – including corruption allegations and multiple impeachment attempts by Congress, which Castillo dismissed as politically motivated – only exacerbated pre-existing tensions in Peru.

Ayacucho’s painful past has been the backdrop of clashes in the region. Derogatory language used by public officials, parts of the press and the public to criticize protesters, casting them as vandals, criminals and “terrorists” have touched a historical nerve.

‘No one is saying all the protesters are terrorists, however they must know that people linked to the Shining Path are marching alongside them,’ said General Oscar Arriola Delgado, spokesperson for the National Police in Peru (PNP), after three people involved in the protests were arrested in Ayacucho for alleged links to the Shining Path. One of them is accused of handing money to the protesters and allegedly taking part in planning the attacks against public and private property.

Although Shining Path has been disbanded since the late 90s, remnants of the group remain active in the country’s south, where Peru’s government says they are profiting from coca production. Police said one woman they arrested had spent years in prison in connection with guerrilla activities in the 80s and 90s, but has not made public whether they link her to any existing factions.

Gavilán warns against overplaying the presence of Shining Path links, however. “People are able to think, they know how to distinguish between what is good and what is bad, we also know how to be outraged despite the fact that we have been through so much”, the anthropologist said.

Entry to Machu Picchu suspended amid unrest in Peru

He himself has first-hand experience of Peru’s entanglement with the Shining Path. After joining the group as an orphaned child soldier when he was 12 years old, the army recruited him at the age of 15 to fight against the same group. Gavilán later became a Franciscan priest before studying anthropology.

The real threat here, in his opinion, lies in another déjà vu – Peruvian soldiers confronting civilians once again. “Our population has seen the faces of the military on the streets again,” he says.