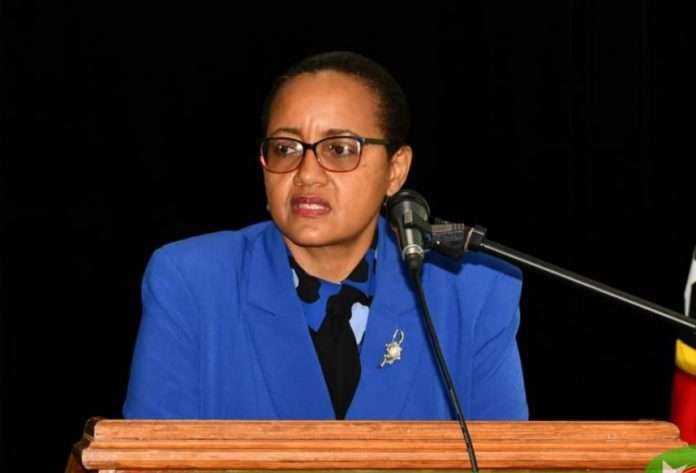 Minister of Government Senator Wendy Phipps is slamming the leakers of Cabinet submissions from January, that reveal the honorarium received by members of the COVID-19 task force in which she is included.

The document was circulated on social media on Tuesday, and revealed the sums paid out to the COVID-19 Task Force.

Phipps on Wednesday confirmed that portions of a Cabinet submission, number 236 of 2021, were on social media.

“The Cabinet submission was drafted on or about December 6, 2021, following almost two months of discussion between the Cabinet and the Ministry of Finance, as to an appropriate mechanism or framework with which to say thank you to the Task Force.”

She said the submission was dealt with on January 10.

‘On January 10, every single Cabinet member, save for the Honourable Attorney General, was present at Cabinet. When that agenda item came up for that meeting and I recognised that it was going to be the next item for discussion, I recused myself from the Cabinet meeting, because I knew in addition to the persons who were proposed for an honorarium, the names of Vincent Byron and Wendy Phipps were on that list, and it was the appropriate thing to have done to exit the room, so I do not influence a discussion in which the outcome would more than likely see me being a beneficiary of an honorarium.”

She indicated after the matter had been discussed for about 15 minutes, she was called back to the Cabinet room and was informed of the Cabinet’s decision.

“By January 21, acting on the instruction of the Cabinet Secretary… the payments were made to the members of the Task Force. The payments were done discreetly, right in this very building, on Friday, January 21, with a senior official from the Ministry of Finance being present, and having signed for them, the same beneficiaries who were asked to walk with an ID.”

She said that for months after the monies were paid out, there was no leaking, and questions of the leak were related to the concerning activities of SCASPA and the Urban Development Corporation (UDC).

“People who sit in a cabinet have to take an oath of office before you can assume any type of role in the Cabinet.”

“What I saw yesterday had all of the names plain as day, and I don’t know what was the aim of all of that.”

She said this type of information being circulated on social media does not help anybody.

“What it does is enable further distrust in terms of government access, especially when matters come before the cabinet.”

The senator said it could have implications for others who may apply for government financial assistance, and may feel threatened by this leak.