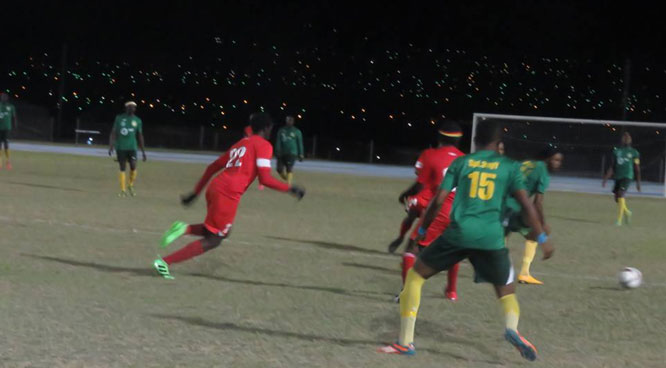 Entering the weekend, each team knew what was required to qualify for the final competition of the season and they all lived up to their expectations.

Playing at their home ground on Saturday (May. 14)  S. L. Horsford St. Pauls United had the easiest of the final round of matches as they took on ninth place Bath United, which they easily dispatched 3-0.

Joash Leader opened the scoring in the 42nd minute, before Ajah Jules 71st minute and Keithroy Freeman 72nd minute strikes put the ‘icing on the cake’ for St. Pauls, as they took the three points to jump to third on the table with 49 points.

However, Hobson Enterprises Garden Hotspurs put themselves out of the reckoning when they could only muster a goalless draw with Fast Cash SPD United to also move to 49 points.

Cayon needing a draw or minor defeat to seal the fourth spot did just that as they too were locked on 49 points.

Jason Isaac broke the deadlock in the 10th minute, before Aldain Powell netted a double in the 45th and 53rd minute. Jerome Richards of Cayon pulled one back in the 63rd minute but that was the only goal that was forthcoming from the FLOW team.

Other results saw, Kimaree Rogers scoring a league high seven goals as Rams Village Superstars brushed aside Rivers of Living Water 11-2. He scored in the 9th, 21st, 52nd, 60th, 78th, 80th and 85th minute, while Recaldo Archibald netted twice in the 11th and 32nd minute of the game.

A close game between  ELCO Limited St. Peter’s  and SOL Island Auto Conaree saw the latter edging the team from Monkey Hill 1-0 , through a 58th minute strike from Darren Brookes.

Meanwhile, the St. Kitts and Nevis Football Association reports the Final Four Playoffs will be played at the Warner Park Football Stadium, as the final leg of matches in recent weeks were moved from the facility to the Kim Collins Athletics stadium and other grounds around the island to assist them in getting the playing surface in playing condition.

The best of three finals will be played on the 10th, 14 and 17th of June at the football stadium.