Prime Minister Dr. the Hon. Timothy Harris assured the people of Constituency Number Six of continued support by the government while addressing a kiddies’ Christmas party organised by the Peoples Labour Party (PLP) at the Saddlers Primary School Sunday.

“We certainly want to do more, and we want to ensure whatever is happening in the country, people everywhere benefit from what is taking place,” said Dr. Harris. “So that is the commitment. I come as the prime minister of the country to say that you can have confidence in our Team Unity Government to be available to serve the young, the old, and the not so old in Constituency Number Six.”

The prime minister said there will be a number of town hall meetings planned in 2020, and Constituency Number Six, and Saddlers Village in particular, will be included.

“I will be coming to do one-on-one consultations early in the New Year so that we could talk in twos in a more private way about those matters that are important to you,” he said. “For the time being, I just want to extend again, best wishes for a joyous Christmas. Please enjoy — and to extend to you all the very best for 2020.”

“I want to thank the people of Saddlers who have come out today for this our kiddies party,” the prime minister said at his first stop in Constituency Number Six, the Saddlers Primary School. “We have attempted, as the Peoples Labour Party, to keep the kiddies parties every year.” 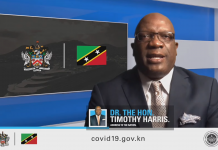