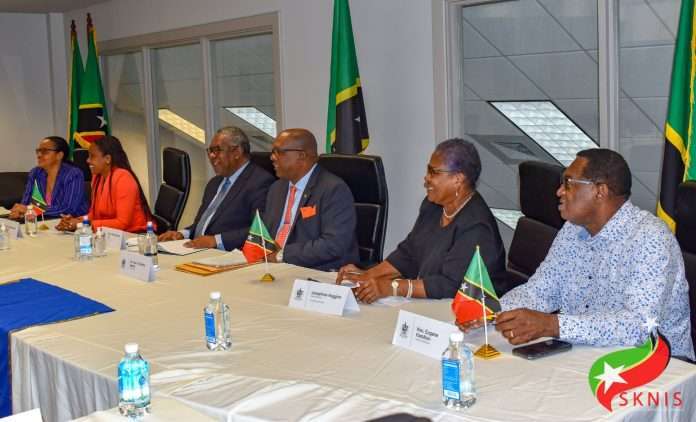 Despite the sacking of six cabinet members, the work of the government continues according to Prime Minister Dr Harris who also did outreach to senior civil servants on Wednesday

On Tuesday, Dr Timothy Harris announced Tuesday the axing of six Cabinet Ministers after their absence from Cabinet meetings since writing the Governor-General in April none of the CCM representatives and only one of the PAM representatives have attended any meeting of the Cabinet

“Whilst others neglected their duty, and failed to attend cabinet meetings, I must commend the members of Cabinet who continue to show great respect for the institution of the Cabinet and for giving yeoman service to their country. We have been focused on delivering for you, our people.

“As Prime Minister and Chairman of the Cabinet, I have listened to our citizens and residents lament about this irresponsible and flagrant disregard for their sworn duty to the Cabinet and by extension, our people and country. You, the good people of this Federation were promised and you deserve better performance by all ministers on the government’s payroll. It is also clear that the current situation cannot continue. The people of St Kitts and Nevis deserve better.”

Dr Harrias revealed he asked His Excellency the Governor-General, Sir Tapley Seaton, to remove the Hon Shawn Richards from the Office of Deputy Prime Minister.

“In his stead, I have advised His Excellency to appoint the Hon Eugene Hamilton to the Office of Deputy Prime Minister. Hon Hamilton has been steadfast and responsible in discharging his duties as Minister of the portfolios assigned to him.

“I have also advised His Excellency to revoke the appointment of Hon Richards as a Minister of Government and to reassign his portfolios to the Hon Eugene Hamilton. Deputy Prime Minister Hamilton will now have conduct the Departments and Subjects under the Ministry of Public Infrastructure, Posts and Urban Development that had been previously assigned to the Hon Richards. “

Dr Harris also indicated that he asked the GG to revoke the appointments of the other Ministers “who have thought fit to disrespect the sacred trust that the people of St. Kitts and Nevis placed in the Government following our very successful General Election Campaign in 2020.”

“As a result, the following individuals, namely the Hon Mark Brantley, the Hon Lindsay Grant, the Hon Jonel Powell, the Hon Alexis Jeffers and the Hon Eric Evelyn have been stripped of their appointments as Ministers of Government.”

He noted that the government must continue to function in the interest of the people.

“As such, I have advised the Governor-General to reassign the portfolios of those members of Parliament that have been removed.

The Hon Wendy Phipps will assume additional responsibility for Tourism and Transport, including the Ports.

Attorney General, the Hon Vincent Byron will assume the additional responsibility for Foreign Affairs and Aviation, Education, Youth and Sports. The Hon Akilah Byron-Nisbett, in addition to her responsibilities, will have added the portfolio for Culture.

The subjects of Agriculture, Fisheries Marine Resources and the Environment will be brought under the Ministry of Sustainable Development.

“I am confident that the Government will continue to deliver the goods and services to the people of our country as well as we have delivered over the past seven years.”

He said the Government continues to function and will do so in an “orderly, efficient and effective manner.”

“These were not decisions taken lightly, but they were essential to put this period behind us and focus on delivering a better future for all the people. Decisions like these require real leadership. Real leadership is about putting people first. It is about delivering a strong, and safer future for them. That is why I have taken the decisions that I have today in the best interest of the public.”

On Wednesday a government release noted that Permanent Secretaries in the Government were presented to the reshuffled Cabinet of Ministers to whom they now report.

Dr Harris at Wednesday’s brief meeting at the Ministry of Finance Conference Room, Prime Minister Harris recorded his profound gratitude to the senior civil servants for their hard work over the last seven years and encouraged them to continue to provide faithful and professional service to the Government of St. Kitts and Nevis.

“We have relied upon and we want to [continue to] rely upon a skilled, motivated and efficient civil service with a professional ethos. That is critically important—the professional ethos of the civil servants. And so, we are expecting that each and everyone will deliver professional service. I expect that the Ministers will have the fullest cooperation and support of every Permanent Secretary in general, and those who are directed to report to them by way of the Constitutional mandate and the reorganization of the Cabinet,” Dr. Harris said.

Prime Minister Harris reiterated to the Permanent Secretaries that the work of the Government is continuous.

Following its meeting with the Permanent Secretaries, the Cabinet of Ministers then held similar discussions with the Heads of Department within the Ministry of Finance and the High Command of the Royal St. Christopher and Nevis Police Force, the St. Kitts and Nevis Defence Force and the Coast Guard Unit.

Former Deputy Prime Minister Shawn Richards reacting to his sacking that was announced when he was overseas attending a funeral said the move from the prime minister had not hurt PAM nor CCM.

“This has not done any damage to the People’s Action Movement or CCM. As a matter of fact, I think it has given our supporters a greater resolve in ensuring that after the next general election Dr. Harris will not be the next Prime Minister of St. Kitts and Nevis, that is certain.

“Dr Harris no longer has to moral authority to lead the federation of St Kitts and Nevis. Six of us had written to the governor-general indicating that we no longer support him. His leadership at this point in time is illegitimate…it means out of 11 elected members of Parliament he only enjoys the support of three of those 11.”