On behalf of the Federal Government and the people of St. Kitts and Nevis, I extend my heartiest congratulations and warmest wishes to you on attaining a decisive electoral victory in the Nevis local elections and becoming the island’s Premier-elect today, Tuesday, December 19th, 2017.

I also congratulate your Concerned Citizens Movement colleagues – the Honourable Spencer Brand, the Honourable Eric Evelyn, the Honourable Alexis Jeffers, and Mr. Keith Scarborough – as well as your supporters on securing a solid win of four out of five seats over the Nevis Reformation Party (NRP).

I am very happy for you, as you prepare to assume the mantle from our dear friend and mentor, the Honourable Vance Amory, who provided the CCM and the island of Nevis with strong, principled leadership for more than two decades, helping to develop the next generation of nation-builders.

During the past five years, we developed a close working relationship that was solidified in those 25 months leading up to the general elections of Monday, February 16th, 2015 when we sought unsuccessfully to have the Motion of No Confidence in the Dr. Denzil Douglas-led administration tabled in the Federal Parliament so that we could debate and vote on it.

That difficult time in this nation’s political life was a challenging, collaborative and transformative experience that created a special bond between us, which has carried into our Team Unity administration.

Our friendship and mutual respect have only grown stronger over these past 34 months as we worked diligently towards achieving greater prosperity for all citizens and residents of both Nevis and St. Kitts, and ushered in an unprecedented level of cordiality and cooperation between the Federal Government and the Nevis Island Administration.

I give you my highest commendation and unwavering support as we continue to work for further progress for all of our people.” 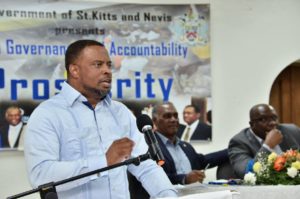