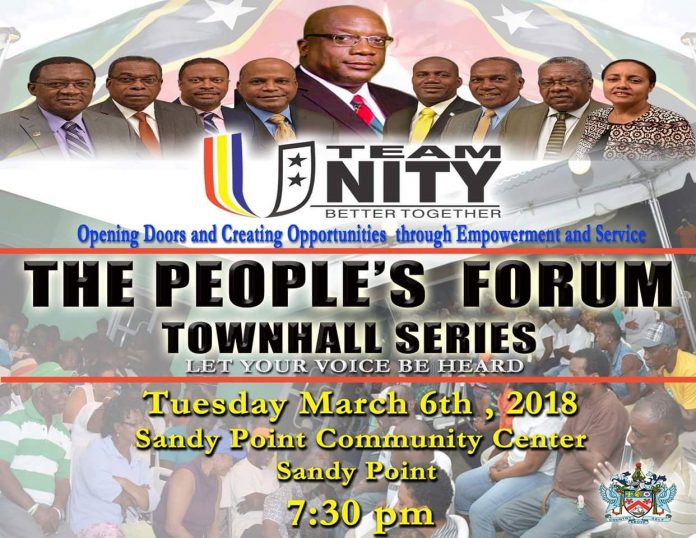 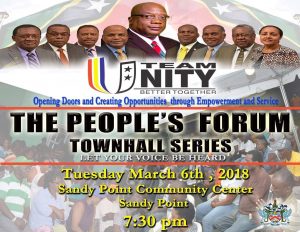 BASSETERRE, St. Kitts – The Prime Minister of St. Kitts and Nevis, the Honourable Dr. Timothy Harris, and Deputy Prime Minister the Hon. Shawn Richards are scheduled to be the two main presenters at the next Team Unity “People’s Forum” town hall meeting in Sandy Point. Richards is the ParliamentaryrRepresentative for Constituency #5, which includes Sandy Point.

The next meeting is scheduled for 7:30 p.m. Tuesday, March 6, at the Sandy Point Community Centre. Other ministers within the Team Unity Cabinet will also be on hand to respond to questions posed by members of the audience.

The People’s Forum town hall series, which kicked off as part of the official activities to commemorate the Team Unity administration’s third year anniversary, forms part of the government’s good governance and accountability agenda where the leaders present themselves to the people and give detailed accounts of their stewardship. To date, successful meetings have been held at the Newtown Community Centre in East Basseterre and at the Joshua Obadiah Williams Primary School in Constituency #7. Both meetings were well attended, as hundreds of citizens and residents packed the halls to hear of the many accomplishments to date by the administration, and also to express their views and concerns directly with the leaders of government.

Tuesday’s town hall meeting be carried live on ZIZ Television (Channel 5), ZIZ Radio (95.9, 96.1 and 96.9 FM) and streamed at www.zizonline.com and via the SKNIS Facebook page.