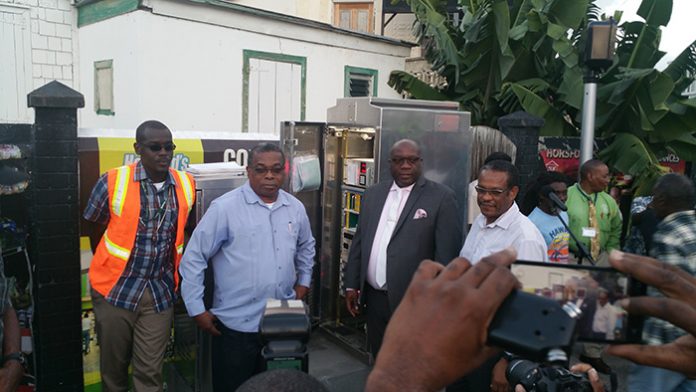 Prime Minister of St. Kitts and Nevis the Hon. Dr. Timothy Harris, giving the thumbs-up sign, officially turned on the Traffic lights in Basseterre for use this week in front of a large cheering crowd.

The historic installation and use of traffic lights culminates a year of preparatory work and is set to efficiently manage traffic in the busier areas of Basseterre.

Speaking at a brief commissioning ceremony Minister of Transport the Hon. Ian ‘Patches’ Liburd noted that after studying traffic on the island action want ought to have been taken.

“We looked at the traffic here in St. Kitts and believe it or not, we have almost 30,000 vehicles in St. Kitts and more are coming. We are not into banning of vehicles because we believe people first and if you want to buy a vehicle you have a choice.”

We have also taken into consideration you the pedestrians. It would be safer for you to use the pedestrian crossings,” he continued.

Liburd was also confident that after the public have familiarized themselves with the lights they will be requesting for more to be installed in other areas. He said, “Because of our financial constraints we had to do phase one but when you have tested these lights tell me so I can tell the Prime Minister phase 2 must start now.”

Managing Director for ADeB Consultants, Martell Lee, the company responsible for the project thanked the Minister for his patience during the period when the installation had been delayed.

He added that this is the most modern of type of this equipment found anywhere and is “military grade equipment and probably the most robust that you will find.”

He continued, “We have also ensured that the lighting and equipment are to the highest specs; the signals are LED, the controls are probably the most modern.”

The lights are mounted on Fort Street, Cayon Street, Victoria Road, the Bay Road, as well as Wellington Road and East Independence Square Street. The current traffic lights mounted around Basseterre are only phase one of the project which cost an estimated USD$572,000.

Since the official commissioning some motorists have had difficulty adjusting to the new parameters of driving including restriction around Basseterre.