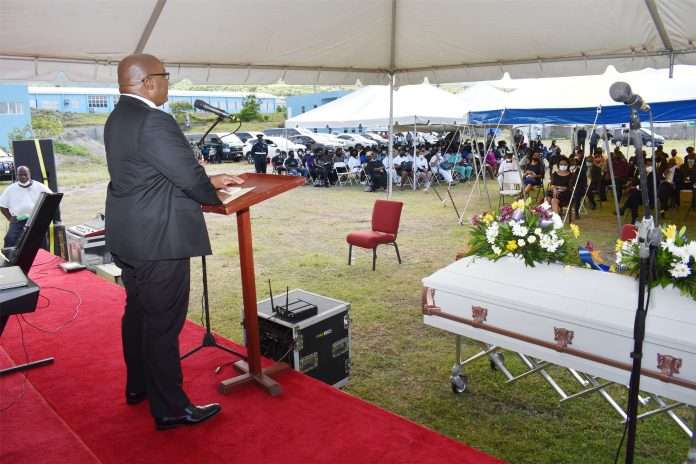 The funeral service was held at the Tabernacle playing field where officiating ministers were Pastor Keith Phipps, Pastor Erickson Cumberbatch, Pastor Eldred Henry, and a daughter of the Late Mr John Charles, Senior Pastor Octavia Charles-Warner of the House of Deliverance New Testament Church of God in Tabernacle Village. Interment was at the Tabernacle burial ground.

“I am here to give some remarks, regarding the life and times of someone I knew and ought to have known because he was part and parcel of our community here in Tabernacle, in Mansion, in Molineux, in Christ Church – John Charles was a fixture,” said Prime Minister Harris, as he paid special tribute to Mr Charles.

He added: “I want to extend on my own personal behalf and on behalf of the government and people of St. Kitts and Nevis, sincerest condolences to his wife, faithful and loving wife, Rose Annie Charles, and his children.”

He named the six children saying that from his knowledge of Mr Charles, he would have wanted all of them to be named as in his (Mr Charles) way, he felt a sense of pride and protection as it related to each of them.

“John Charles, as the educator, is well known – yes as teacher, as head teacher, as education officer, but also as education planner,” said Prime Minister Harris. “Not only could I recall his involvement in purveying a quality education at primary school, at secondary school, and elsewhere in which he engaged, but I also remembered John’s strong commitment to his community.”

Mr John Charles was an avid sportsman and had made a name for himself in the field of cricket, as Dr Harris said: “What stood out was John was a classic batsman. He went to the field and to the crease and he always wanted to make runs.”

Prime Minister Harris is the sponsor of the longest running domino league not only in the Federation of St. Kitts and Nevis, but also in the region, the Constituency Number Seven Dr the Hon Timothy Harris Domino League, which last year celebrated its 25th anniversary.

According to Dr Harris, Mr John Charles was one of the founding fathers of the league. Along with Mr Osmond Petty (now the Permanent Secretary in the Ministry of National Security), they had come together and approached him not for politics, but had come together for the community, and to make an intervention which they believed would be an important one to bring the people together. Mr Charles played for the Mansion Domino Club in the league.

“The legacy of sports as a unifier – sports as a vehicle to bring in people – was one which John Charles, along with others saw and utilised to good effect,” said Dr Harris. “So I want to thank him again for that particular contribution.”

Children of the Late Mr John Adolphus Charles were well supported by their colleagues. Pallbearers were members of the Royal St. Christopher and Nevis Police Force, as his son Mr Garfield Charles is a member of the elite Strategic Intelligence Unit of the Police Force. Also giving support was Commissioner of Police Mr Hilroy Brandy.

Other tributes were given Nevisian Mr Lawrence Richards who was in university with Mr John Charles, Permanent Secretary in the Ministry of Education Mr William Vincent Hodge, former Prime Minister and now Leader of Opposition the Hon Dr Denzil Douglas, and family members including daughter Mrs Cyntella Charles-Esdaille who works as a nurse in England and who paid her tribute by video link.

Prayer of comfort was offered by Apostle Judah Payne, while eulogy was read by former Senior Assistant Secretary in the Ministry of Education Mr Michael Blake who suggested that a school should be named in honour of Mr John Charles for the contribution he had made to the area of education. Message in Word was delivered by Pastor Erickson Cumberbatch of the Molineux Wesleyan Holiness Church and Chaplain of the Police Force, while closing prayer was offered by Pastor Eldred Henry.