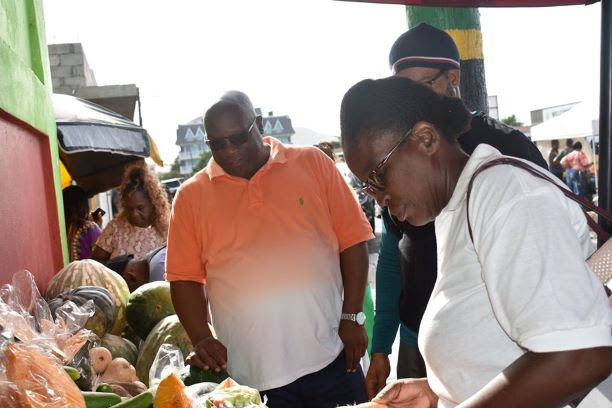 - Advertisement -
Photo: Prime Minister Dr. the Hon. Timothy Harris admires the produce of a local farmer during a previous walkthrough of the Basseterre Public Market.


BASSETERRE, St. Kitts-  Prime Minister the Honourable Dr. Timothy Harris has publicly commended all those continuing the necessary work to keep the engine of the Federation’s economy turning. He made special mention of local farmers who have stepped up their thrust to ensure food security at home when the world races to further contain the COVID-19 disease.

Prime Minister Harris told listeners and viewers of WINNFM’s Inside the News programme on Saturday that as he travels around the island, “I would see an abundant supply of carrots, sweet potatoes, white potatoes, onions and season peppers.”

In this regard, the prime minister told the nation’s farmers that the “country appreciates that they have been there providing food, and the government certainly appreciates their efforts.”

It was also noted that the Department of Agriculture has commenced a programme of providing free seeds and seedlings to farmers, as well as harrowing their lands free of cost.

“We have also set aside another 135 acres of land from those lands that we redeemed from the land for debt swap for these to be put into food production,” Dr. Harris added.

Part of the Team Unity Government’s comprehensive stimulus package announced in support of persons whose lives and livelihoods were affected by COVID-19 disease was the injection of $10 million into the agriculture industry to boost production and ensure greater food security.