Toronto, Canada – During the afternoon of Oct. 31, on the sidelines of the Toronto Global Forum where he had the high-profile task earlier in the day of introducing a forum on climate-resilient infrastructure, Prime Minister the Honourable Dr. Timothy Harris met with the Hon. Elizabeth Dowdeswell, lieutenant governor of the Province of Ontario.

At the meeting, which took place in the Lieutenant Governor’s Suite at Queen’s Park, Toronto, the seat of the government of Ontario, Dowdeswell expressed her pleasure in having the opportunity to engage on issues of mutual concern with Harris.  They discussed wide-ranging topics, including hurricane relief and rebuilding in St. Kitts and Nevis and the wider Caribbean region.

Dowdeswell, who is the Crown’s representative in Ontario, has a long and distinguished public service career spanning the provincial, federal and international levels. Importantly, the lieutenant governor has deep experience in matters of the environment, having served as the head of Canada`s Atmospheric Environment Service, as well as executive director of the United Nations Environment Programme and under-secretary-general of the United Nations. It is this background which made the meeting especially significant for the prime minister.  Earlier in the day, Harris made a clarion call to delegates of the Toronto Global Forum, urging them to rally around the hurricane recovery and rebuilding efforts in the Caribbean and elevate climate change to the top of the international agenda.

Harris exchanged gifts with the lieutenant governor and signed the guest book on behalf of the government and people of St. Kitts and Nevis. 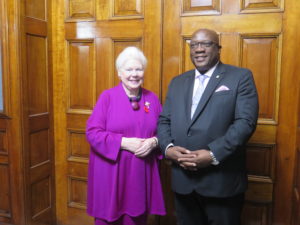