Facebook
Twitter
Pinterest
WhatsApp
PM Harris’ Statement on the Passing of the Hon. Ralph T. O’Neal OBE,
the British Virgin Islands’ First Premier and Longest-Serving Member of Parliament
November 12th, 2019
Prime Minister Dr. the Honourable Timothy Harris of St. Kitts and Nevis extends his heartfelt sympathy to the people of the British Virgin Islands and the Caribbean on the passing of the Honourable Ralph T. O’Neal OBE, who died yesterday, Monday, November 11th, 2019 at the age of 85 years old.  He was born on December 15th, 1933 in Virgin Gorda, BVI. 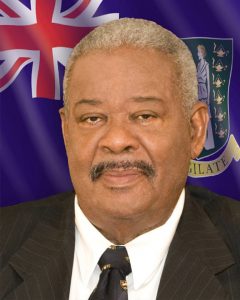 The Hon. Ralph T. O’Neal OBE became the British Virgin Islands’ first Premier (2007 – 2011) when the BVI adopted a new Constitution, which introduced a cabinet style of Government that saw the Chief Minister position replaced by and renamed Premier.  He was credited as being one of the longest-serving Members of Parliament (1975 – 2015) in the English-speaking Caribbean.

In his early life, he received his education at St. Mary’s Anglican Elementary School in Virgin Gorda and the St. Kitts-Nevis Grammar School in St. Kitts before later attending a two-month course at the University of the West Indies and graduating from Trinity College, Oxford University in England.  He graduated with two diplomas, gaining distinctions in both – one in Government and Political Science and the other in Economic Development; in the latter, he specialized in the study of the development of small countries.

“The Hon. Ralph T. O’Neal OBE was an inimitable fixture in Caribbean politics and a flag bearer for the economic resiliency and prosperity of small islands,” Prime Minister Harris said today in reflecting on his remarkable legacy.

“We in St. Kitts and Nevis can count ourselves honoured to be inextricably linked to the Hon. Ralph T. O’Neal OBE, as he spent some time at one of our elite schools, which served him well as a stepping stone to greatness,” the Prime Minister also said.

“The Hon. Ralph T. O’Neal OBE was responsible for a large swath of development in the BVI, spanning a diverse range of infrastructure and other capital projects, including clinics, police stations, roads, and schools.  Indeed, just about every fabric of modern-day BVI society bears his thumbprint,” the Prime Minister of St. Kitts and Nevis added, while also noting that O’Neal’s VIP administration was responsible for the awarding of Crown lands that resulted in many BVI residents building their first homes.

Speaking at a ceremony held in 2010 to mark the government’s granting of freehold titles to land on the island of Anegada to 29 Anegadians, the late Premier, the Hon. Ralph T. O’Neal OBE, said, “Today is a continuation of what was started some years ago.  The process of getting land titles to everybody especially the young people, who can now say this is your own native land, is happening at a very opportune time.  With your titles, you will be able to do very well, and I am working for every Anegadian to get a fair share of the pie.”

The BVI House of Assembly voted on October 18th, 2019 to rename the Central Administration Building after the Hon. Ralph O’Neal OBE.

The Prime Minister of St. Kitts and Nevis extends deepest condolences to the Hon. Ralph O’ Neal’s beloved wife, Reverend Edris O’Neal OBE and four children, as well as to their extended family and the people of the BVI who join them in mourning his passing.