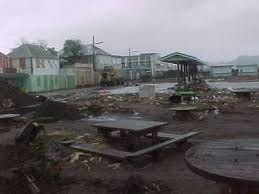 Basseterre, St. Kitts – With just about a week until the official beginning of the 2017 hurricane season, Prime Minister Timothy Harris recommends the people of St. Kitts and Nevis make early preparations, as 11 named storms are predicted to occur.

The season, which begins June 1, runs until November. Weather experts expect four of the 11 storms will become hurricanes and two may be major, meaning they will be Category 3 or greater. Category 3 storms have winds from 111 to 129 mph and devastating damage will be the result.

Dr. Harris reminded citizens that Jamaica and Haiti are still recovering from recent heavy rainfall that resulted in serious flooding that caused property damage and loss of life

“This sad situation has occurred, a possible result of climate change, and the hurricane season is yet to begin,” Harris said, calling on residents in St. Kitts and Nevis to make the relevant preparations now to protect life and property.

“As prime minister, I endorse the call of the National Emergency Management Agency (NEMA) for all residents to begin now or to continue to put the necessary preparations in place to protect life and property,” he said.

Harris also called for the business community to make certain to have items available at special prices to help encourage early preparation.

“I urged the business community to make items such as portable generators, tarpaulins, flashlights, batteries, transistor radios and other non-perishable items available at specially discounted prices,” he said.

He also encouraged families to make special preparations for those vulnerable individuals who may have special needs, “such as the shut-ins, the children, the diabetics, the blind, the deaf and other residents with special dietary needs and medical conditions,” he said. “Preparation is key to successful management during the hurricane season.”

He also appealed to homeowners and renters to ensure that their property is appropriately insured and pleaded with businesses to take action to properly secure their premises.

“It is important that I further join NEMA’s call to both occupants of private dwellings, as well as industrial and commercial businesses, to begin now to take the necessary actions to remove or properly secure items on their premises that can become missiles in high winds and pose a threat to life and property,” he said.

Harris also urged the public to pay attention to the public service announcements on the radio and appealed to individuals not use social media to spread false information.

Port Zante Back in Cruise Business with Arrival of Celebrity Equinox