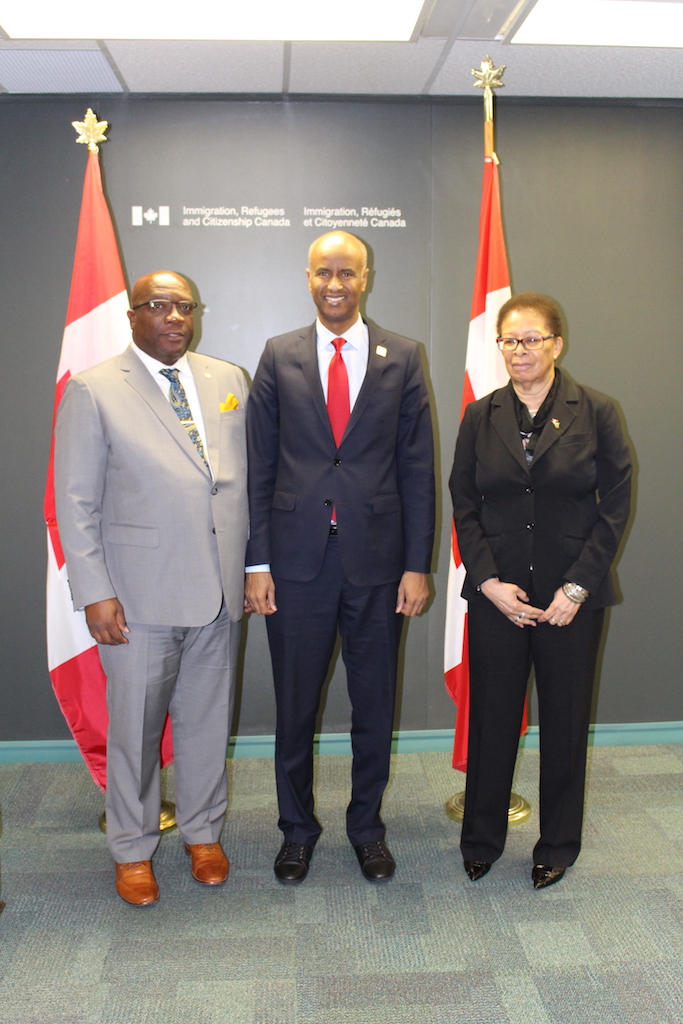 Ottawa, Canada – The prime minister of the federation of St. Kitts and Nevis,  the Honourable Dr. Timothy Harris, is currently in the Canadian capital of Ottawa today to meet with top officials in the Canadian federal government.

Harris will engage the Hon. Ahmed Hussen, the minister of immigration, refugees and citizenship, in a discussion where Canada`s immigration requirements will feature among the topics to be addressed.

Effective Nov. 22, 2014, St. Kitts and Nevis lost its visa-free status with Canada after the Canadian government expressed some discomfort with the conduct of the former Dr. Denzil Douglas-led government concerning its administration of the Citizenship by Investment (CBI) programme. Since winning the general elections on Feb. 16, 2015, Prime Minister Harris’ Team Unity administration said it has not wavered in its commitment to reform the programme through enhancing cooperation and dialogue with key international partners such as Canada.

The meeting in Ottawa follows up on the prime minister`s recent constructive dialogue with the Prime Minister of Canada, the Right Hon. Justin Trudeau, Sept. 2. During the wide-ranging meeting held last month in the Canadian Prime Minister’s Parliament Hill office, both leaders agreed to continue discussions on a host of issues.

Today’s high-level engagement also comes on the heels of Minister of Foreign Affairs the Hon. Mark Brantley’s conversations with Canada’s Foreign Affairs Minister Chrystia Freeland during the recently concluded United Nations General Assembly, as well as consistent efforts on the ground by the federation’s High Commission in Canada led by Her Excellency Shirley Skerritt-Andrew. Also, in June 2017, the federation’s first independent chancery in Canada opened in Ottawa, signalling Harris’s administration’s meaningful intention to repair one of its oldest relationships. Canada and St. Kitts and Nevis formally established diplomatic relations Oct. 11, 1983.

In the years leading up to the Team Unity government’s election to office, trust in the federation’s CBI programme had been broken, so these series of meetings form part of confidence-building measures.  High Commissioner Skerritt-Andrew noted today that, with these meetings, there is now a pathway aimed at discussing and resolving oustanding issues, and this sets a good foundation for rebuilding trust.

After his meeting in Ottawa, Prime Minister Harris will go to Toronto, where he will participate in the Toronto Global Forum – International Economic Forum of the Americas.  The Toronto Global Forum brings together thought leaders, as well as political and private sector leaders to discuss topical issues of importance.

The prime minister will address the forum, focusing on climate resilient infrastructure (adapting infrastructure to climate change) in small island states – a topic of paramount significance and salience in the aftermath of recent Category 5 hurricanes in the Caribbean.

These high-level engagements in Canada – with the public and private sectors – reflect the Team Unity government`s commitment to reset and renew the relationship with Canada. This comes as Canada prepares for its 2018 Presidency of the G7, which comprises the seven richest economies in the world, and bids to take a seat on the United Nations Security Council for a two-year term starting in 2021.