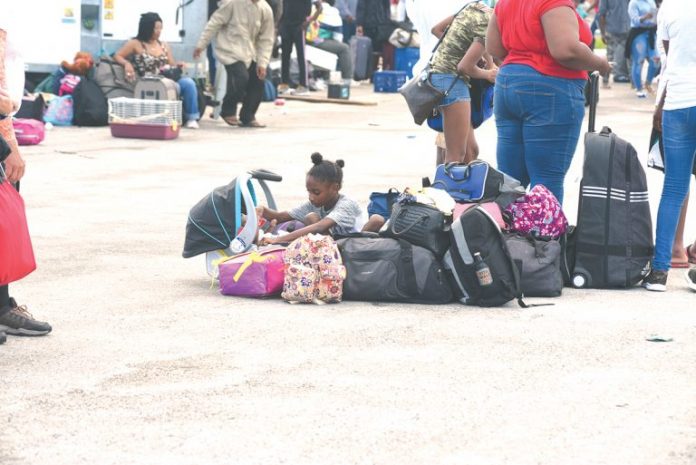 While speaking to reporters at the Treasure Cay International Airport, Minnis said, “I think at this point and time we need to find some sort of accommodation, housing for individuals. Yes, one can look at transporting to Nassau. Nassau can only accommodate a certain amount, so you cannot lift the entire Abaco community to New Providence overnight.”

He continued, “So, when I get home, I will have to discuss with my colleagues and with NEMA (National Emergency Management Agency), the possibility of setting up appropriate tents temporarily and the appropriate open space, dry land, etc. Once we do that, we will have all the appropriate facility, tents meeting all the hygienic requirements, tents having all the kitchen facilities so that individuals are fed properly and that would give us some time to construct and build proper facilities.

“But, Nassau, it might have been a misnomer that we can just move everybody from Abaco to Nassau. Nassau cannot possibly accommodate. Many people may not have family members there so you’d be moving the problems that you have here in Abaco to New Providence and that is a matter that has to be addressed and discussed when I return to Nassau.”

Hurricane Dorian made its exit from The Bahamas on Tuesday night, after pulverizing Grand Bahama and Abaco for three days.

Widespread damage has been reported on both islands as a result of the storm, which left thousands of people homeless and at least 43 dead.

The prime minister took a post-Dorian tour of Abaco yesterday.

He was accompanied by the secretary general of CARICOM, the premier of the Turks and Caicos, officials from the Caribbean Disaster Emergency Management Agency and the commissioner of police.

Following the tour, Minnis noted that most of the island was “decimated”.

“I came here on the ground to visit the various different communities,” he said.

He said seeing the damage from the air is “completely different” from seeing it while on the ground.

“However, we have adequate water, food, etc. The community is being fed well. We have external, international agencies. We have chefs who are providing 600 [and] 700 meals per day and whatever is necessary so food and water is not an issue.”