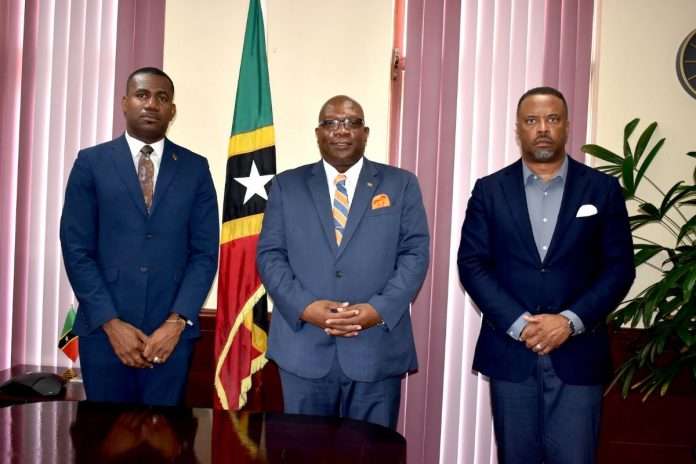 Prime Minister Hon. Dr Timothy Harris has updated the nation on the meeting that took place today April 14th between him and the two other leaders of the parties that make up the Team Unity Government noting he presented  a framework that will improve the work of the Cabinet going forward.

Dr Harris in a statement this evening said the leaders of the parties comprising the tripartite Team Unity movement met in the cabinet room to continue discussions charting the way forward for the Team Unity Administration.

“Today’s meeting was a follow up to that held last Wednesday in which my colleagues put forward some areas of concern for my consideration,” Dr Harris said.

He said that given the nature of the concerns presented he presented his views on the matters raised.

“The meeting was cordial as was the one held last week. At today’s meeting, I proposed a framework to address the issues raised.”

He explained that some of the matters that would be included in the framework going forward.

“I further proposed that all ministries be subject to greater accountability to the cabinet through regular reporting so members may be appraised of the working of the entire (government) .”

He added that a possible cabinet reshuffle could be on the cards in the near future.

“In response to demands that portfolio is, reassigned I committed to undertake the review of the makeup of the cabinet to improve improving the efficiency and effectiveness of the government as a whole.”

“In the interim, the budgetary support to our sister Island of Nevis has been increased at the further request of the Premier.”

He acknowledged that the political in fighting off the last few weeks was difficult on the populace.

“I recognize that the political events of the past few weeks have created considerable and undue anxiety, discomfort and uncertainty for you the people of St Kitts and Nevis.

“I remain committed to the process that would bring this unfortunate situation to an end.”

The prime minister added that it was a time for the country to have a cabinet that is fully committed to addressing the pressing issues that confront the people such as job creation, the cost of living, caring for the elderly and poor, providing housing, and maintaining the peace and security.

“We would be providing hope and opportunities to our people for a better tomorrow. I remain open to further discussion.”

Deputy Prime Minister Shawn Richards said that while the gap between their demands and the Prime Ministers’ proposals they will continue to be patient.

“Pam understands that it must do all that is possible to maintain stability and continuity in our beloved country.

He said he will meet immediately with his PAM caucus in an emergency session.

“I will duly report to them in detail what transpired today and seek the input on all issues. There after we will decide on the way forward.”