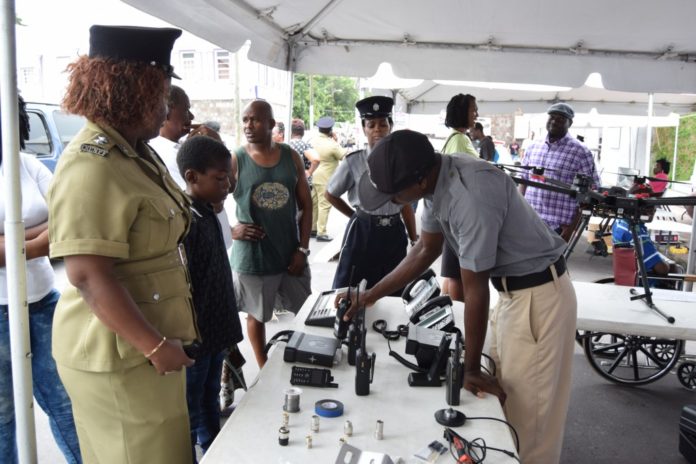 Basseterre, St. Kitts – Hundreds traversing Bank Street in Basseterre got a better sense of the various units and capabilities of the Royal St. Christopher and Nevis Police Force (RSCNPF) as the agency staged a career fair Aug. 18.

The tactical unit booth was the most popular, with locals eager to learn more about the weapons and tools, including riot gear, tear gas rounds, shot guns, ammunition and other items on display. Demonstrations by the K-9 Unit kept the audience buzzing as Officer Castor, guided by his handler, staged mock searches for guns and performed takedowns of suspects. Other booths included the Crime Scene Unit; investigative units, featuring the Criminal Investigations Department, Special Victims Unit and more; the Traffic Department; telecoms, and others.

The agency’s force personnel officer, Clifford Govia, who coordinated the event, said that there is a plan to expand the manpower from 435 to about 485 and, as such, a special appeal was being made to people between 18-35 to join the RSCNPF. Govia said St. Kitts and Nevis has grown significantly and so, too, has the number, types and sophistication of crimes committed. The RSCNPF also had to change to keep pace as it strives to enhance public safety.

“We have now expanded tremendously,” Govia said. “We now have areas such as crime scene where youngsters who have … subjects in natural sciences … do not have to become doctors. They can literally lend their skills to the development of the police organization.

“We also know that crime is changing; a lot of it has to do with computers and other things, so [someone] with a bachelor’s [degree] can come and join the Financial Intelligence Unit (FIU) because you can make a big difference in that area.”

A number of civilian posts are also available, particularly in the Telecoms Division, which needs people to monitor the Closed Circuit Television (CCTV) cameras, operate surveillance drones, maintain and repair computers and police radios, and a host of other jobs.

Assistant Commissioner of Police Merclyn Hughes said in addition to educating the public about career opportunities available in law enforcement, it also helps to humanize the men and women charged to serve and protect.

“We want the community to recognize that we are part of them,” she said. “We come from among them; we want to work with them; we  want them to work with us; and today we are here on show so that [people] can come see what the police [are] all about.” Hughes added that she was pleased to see so many stop by to interact with the officers at the different booths.

In addition to the work of the police, people also learned more about the training opportunities and academic studies that are available in various fields.

Govia noted that similar initiatives will take place over the coming weeks to maintain today’s momentum. Interested individuals can learn more by visiting police headquarters on Cayon Street in Basseterre. 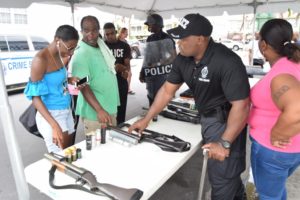