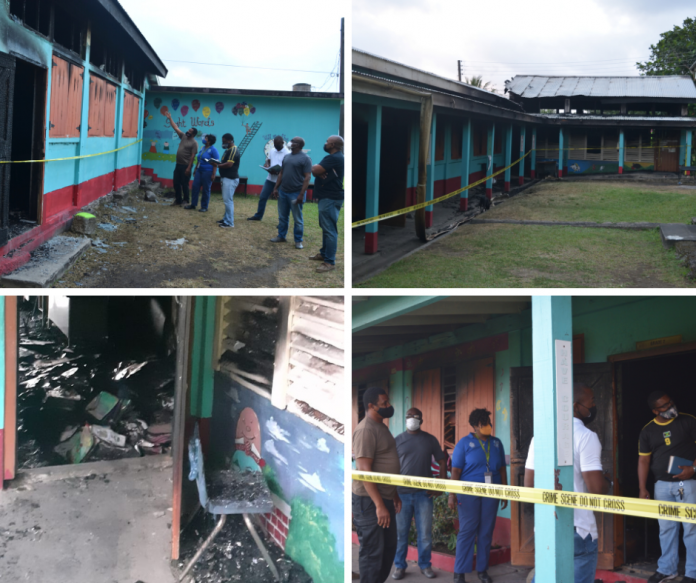 The Police have charged 42-year-old Andrea Greene of Molineaux for the offence of Setting Fire to a Public Building, namely the Joshua Obadiah Williams Primary School. Greene was charged on May 27, 2022.

The offence was committed on March 18, 2022. She is currently in Police custody.

On March 18, 2022, St. Kitts and Nevis Fire and Rescue Services Department in Tabernacle responded to a report of a fire at the school just before 10 p.m. When the Fire Officers arrived at the school they met several classrooms engulfed in flames. The classrooms from kindergarten to grade five and their contents were completely destroyed.

Hundreds from the community were on hand to witness as Fire and Rescue Services scrambled to salvage as much of the facility as possible.

On Friday, a parliamentary representative for the area and Prime Minister Dr Timothy Harris visited the site with the Attorney General then Acting Minister of Education Vincent Byron Jr along with teachers and staff of the school.

The following day, Permanent Secretary in the Ministry of Education William Vincent Hodge said they were alerted last evening the school was on fire.

“This has been a tragedy,  it has set us back many years.”

He said the school have been one of the best-kept schools in the country.

The Royal St. Christopher and Nevis Police Force was offering a reward in the sum of EC$35,000 for information that leads to the arrest and successful prosecution of the person(s) responsible for the fire at the Joshua Obadiah Williams Primary School.