BASSETERRE, St. Kitts — Police are investigating a fatal traffic accident that occurred in the vicinity of the Queen Victoria Roundabout on October 15.

The accident involved motorbike PB 5341, owned and ridden by Rae Clarke of Mattingley Heights and pedestrian Conrod Simon of Wellington Road. Preliminary investigations have revealed that at close to 5 p.m. on Thursday, Clarke was travelling along Cayon Street. Simon stepped down from the sidewalk onto the road in the vicinity of the pedestrian crossing on Pond Road. Clarke was heading east onto Pond Road and collided with Simon.

Clarke received a cut and minor bruises on his feet. The Emergency Medical Service transported Simon to the Joseph N. France General Hospital, where he later died. Simon was 81-years-old. An autopsy will be performed soon to determine his exact cause of death.

Persons with information regarding this incident are urged to contact the Traffic Department by calling 465-2241, the nearest Police Station or the crime hotline 707 where information can be given anonymously. Investigations into the matter are ongoing. 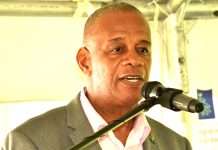