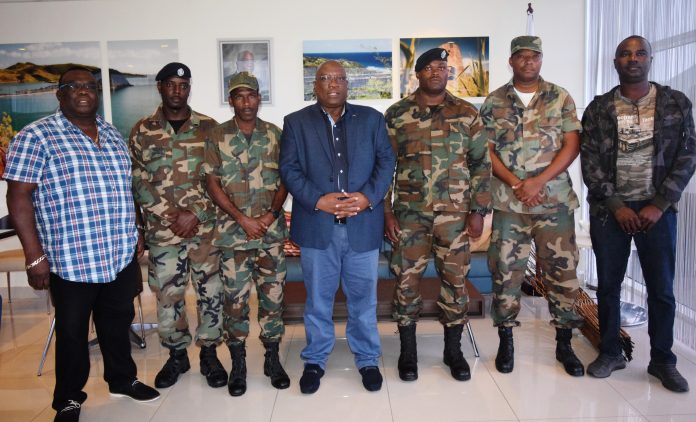 The four Police Officers from the Federation who were assisting with security and recovery efforts in The Commonwealth of the Bahamas returned home on a Regional Security System (RSS) aircraft on Sunday.

“You were the first to have been chosen. Initially it should have been a three-week assignment. I gather that overtime that was extended and you volunteered to be there. I want to say a special thank you on behalf of the people of St. Kitts and Nevis, and on behalf of the people of the region for the sterling service that you rendered,” Prime Minister Harris told the officers who were asked to remain beyond their initial three-week rotation in The Bahamas.

The contingent left the Federation on Sept. 20, was led by Sergeant Ray Gordon and included Officers Chad Cuffy, Otis Stevens and Victor Nicholas. They formed part of a larger response that was coordinated by the RSS among its member states following a request for assistance from the territory which was devastated by Hurricane Dorian.

Speaking on behalf of the group, Sergeant Gordon said it was a pleasure serving the people of The Bahamas during the six-week period and added that “our hearts…go out to them during the recovery efforts that are going on now.”