MASKWACIS, Alberta, July 25 (Reuters) – Pope Francis apologized on Monday to Canada’s native people on their land for the Church’s role in schools where indigenous children were abused, calling their forced cultural assimilation a “deplorable evil” and “disastrous error.”

Speaking near the site of two former schools in Maskwacis, Alberta, Francis apologized for Christian support of the “colonizing mentality” of the times and called for a “serious” investigation of the schools to help survivors and descendants heal.

“With shame and unambiguously, I humbly beg forgiveness for the evil committed by so many Christians against the indigenous peoples,” said Francis, who arrived and left in a wheelchair due to a fractured knee.

The address to the First Nations, Metis and Inuit people was the first apology on Canadian soil by the pope as a part of tour to heal deep wounds that rose to the fore after the discovery of unmarked graves at residential schools last year.

The 85-year-old pope had promised such a tour to indigenous delegations that visited him earlier this year at the Vatican, where he made an initial apology.

Indigenous leaders wearing eagle-feather war headdresses greeted the pope as a fellow chief and welcomed him with chanting, beating of drums, dancing and war songs.

“I am here because the first step of my penitential pilgrimage among you is that of again asking forgiveness, of telling you once more that I am deeply sorry,” he said.

He was addressing the indigenous groups in the Bear Park Pow-Wow Grounds, part of the the ancestral territory of the Cree, Dene, Blackfoot, Saulteaux and Nakota Sioux people.

“Sorry for the ways in which, regrettably, many Christians supported the colonizing mentality of the powers that oppressed the indigenous peoples. I am sorry,” he said. “In the face of this deplorable evil, the Church kneels before God and implores his forgiveness for the sins of her children.”

After the pope spoke, Chief Wilton Littlechild placed a feather headdress on the pontiff’s head. Francis stood from his chair and wore it for a few moments before a clapping crowd.

An indigenous singer also performed a version of Canada’s national anthem in Cree, with tears pouring down her face. A red banner with names of missing children was carried before the pope, who kissed it.

Before his address, Francis prayed silently in a field of crosses in the cemetery of a church for indigenous people and passed by a stone memorial to the two residential schools once in the area. 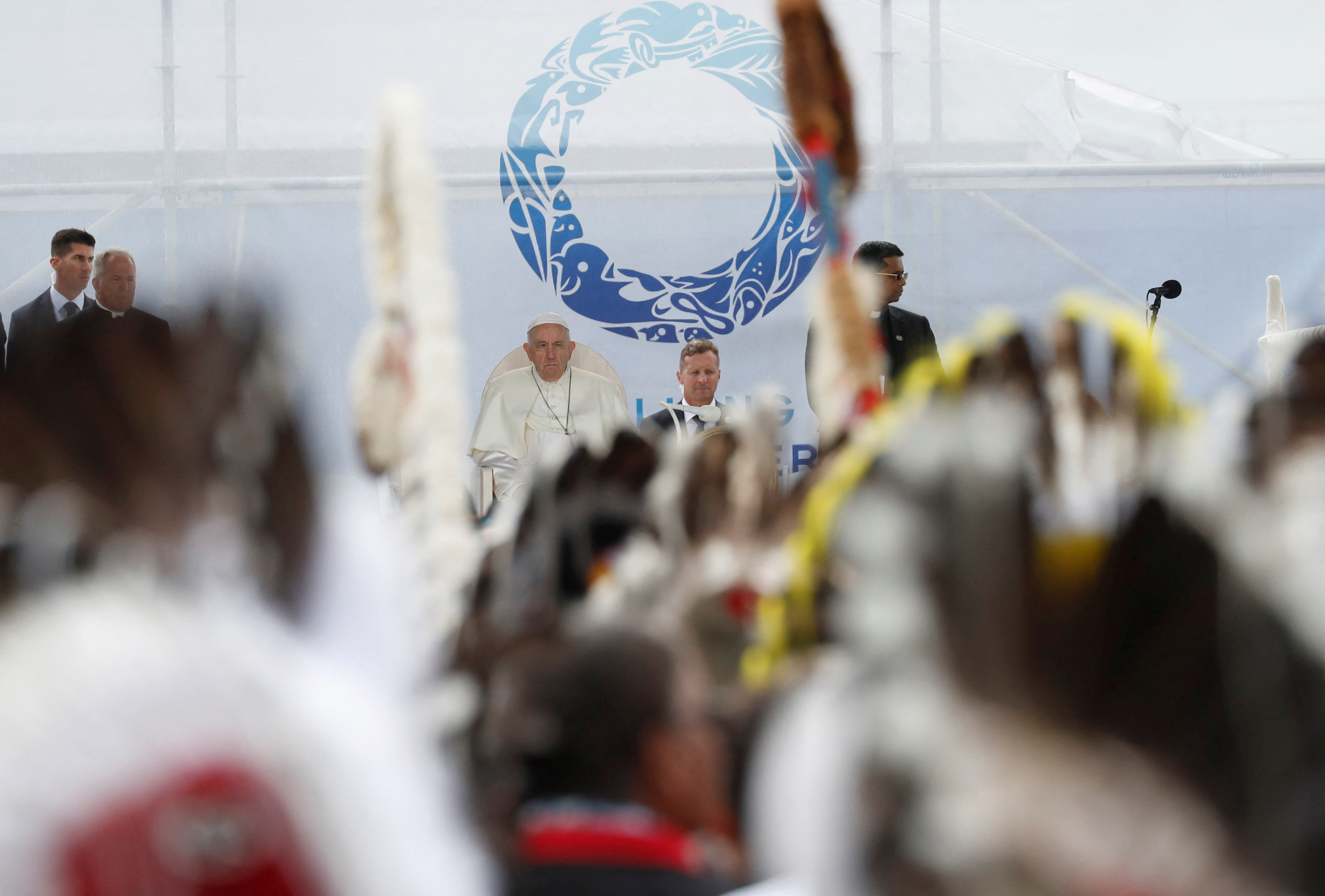 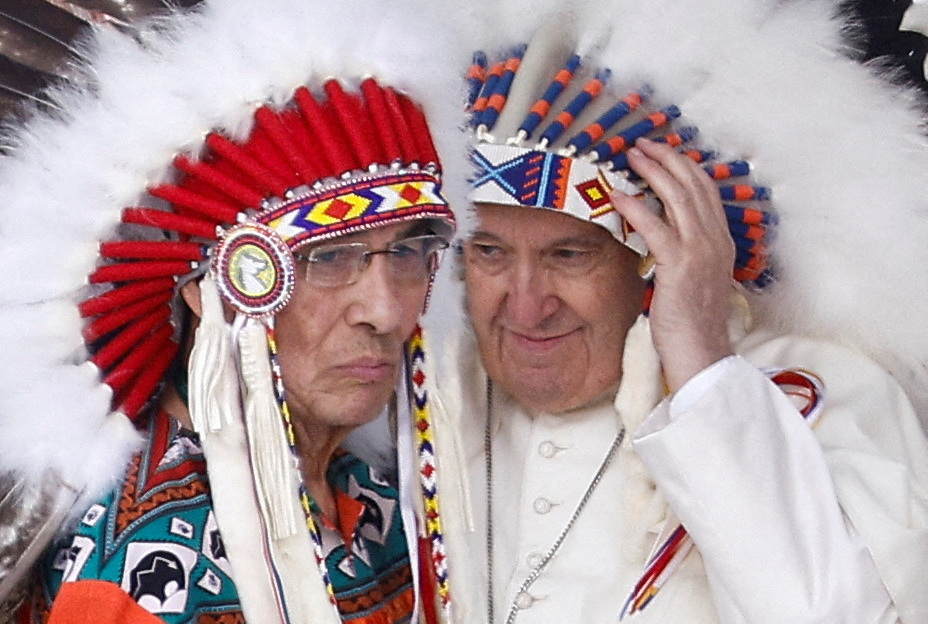 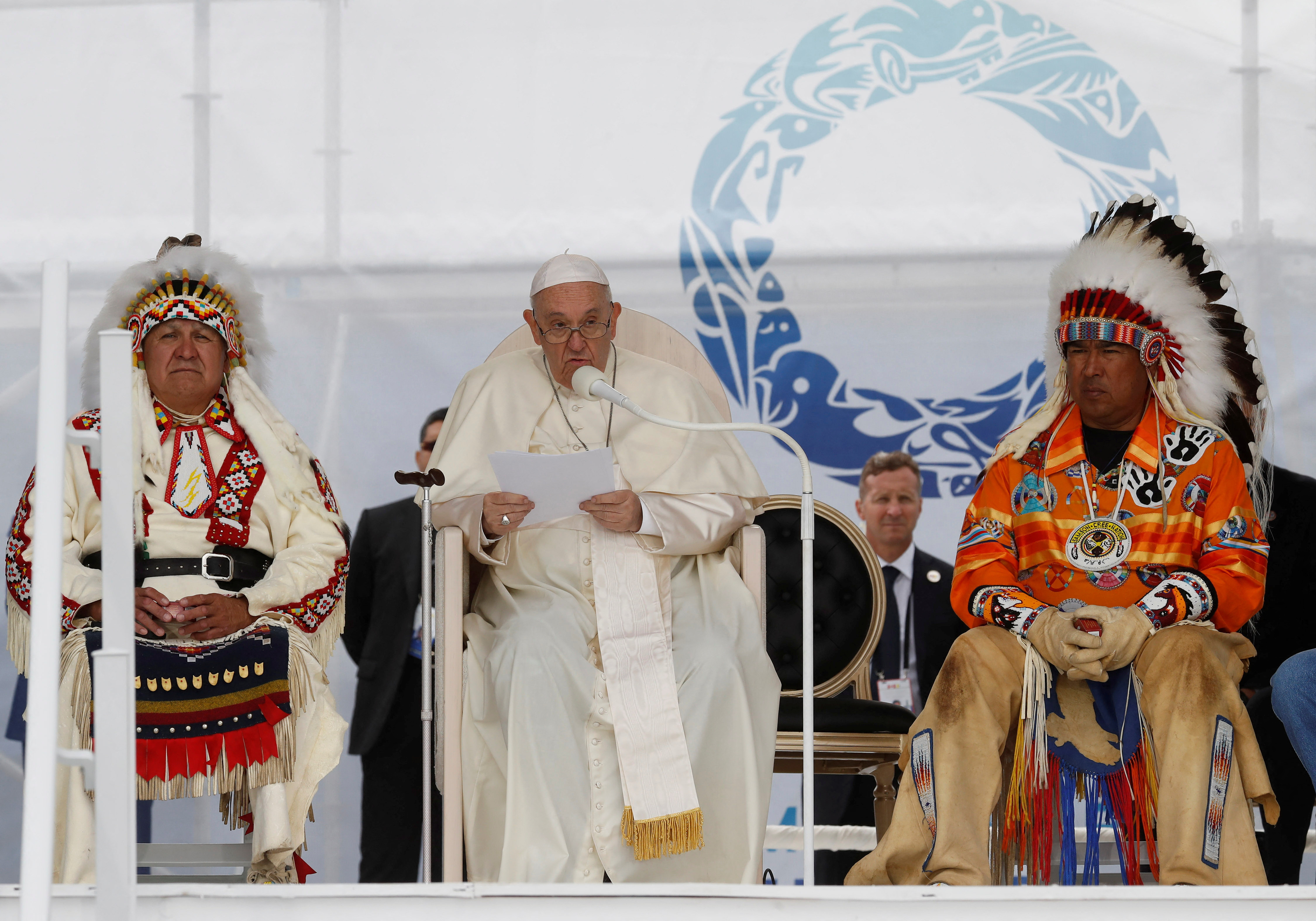 Between 1881 and 1996 more than 150,000 indigenous children were separated from their families and brought to residential schools. Many children were starved, beaten for speaking their native languages, and sexually abused in a system that Canada’s Truth and Reconciliation Commission called “cultural genocide.” read more

“I ask forgiveness, in particular, for the ways in which many members of the Church and of religious communities cooperated, not least through their indifference, in projects of cultural destruction and forced assimilation promoted by the governments of that time, which culminated in the system of residential schools,” the pope said.

Most of the schools were run for the government by Roman Catholic religious orders of priests and nuns.

Many survivors and indigenous leaders say they want more than an apology. They also want financial compensation, the return of artefacts sent to the Vatican by missionaries, support in bringing an alleged abuser now living in France to justice and the release of records held by the religious orders that ran the schools.

Some also have called for the Catholic Church to renounce 15th-century papal bulls, or edicts, that justified colonial powers taking away indigenous land.

For Wallace Yellowface, 78, a boarding school survivor from the Pikanni Nation Reserve in southern Alberta, the pope’s message was too little offered too late.

“It’s late for an apology, and I don’t think it will do me much good,” he said, adding that he was still trying to find out what happened to his sister who attended a residential school.

Still, many of the indigenous people in the crowd cried openly or applauded each time the pope said he was sorry or condemned policies to wipe out indigenous cultures.

In January, the Canadian government agreed to pay C$40 billion ($31.5 billion) to compensate First Nations children who were taken from their families.

The Canadian Conference of Catholic Bishops has promised to raise C$30 million for healing and other initiatives. The fund has raised C$4.6 million so far.