Minister of Public Infrastructure, Hon. Ian Patches Liburd assured the sitting of the National Assembly July 30 that any potential costs or time overruns are no risk to SCASPA amid reports the contractor for the construction of the second cruise pier has claimed additional money in the sum of $7.8 million as a result of unfortunate physical conditions.

“The commercial construction contract, would be signed between the Government of St. Kitts and Nevis, SCASPA and the Government of Canada, CCC and such on a Government to Government basis. Contract and construction performance risks are borne by CCC. Therefore, any potential costs or time overruns are managed between CCC and JV Driver at no risk to SCASPA,” the minister said, reading from an Oct. 14, 2016, from the Canadian Commercial Corporation (CCC)

Minister Liburd said the request had been fully denied by the St. Christopher Air and Sea Ports Authority, explaining the general rule is that a contractor assumes the risk of additional costs associated with differing site conditions, putting the responsibility on the Canadian Commercial Corporation and its contractor. 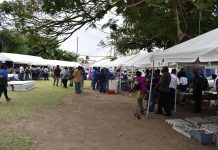