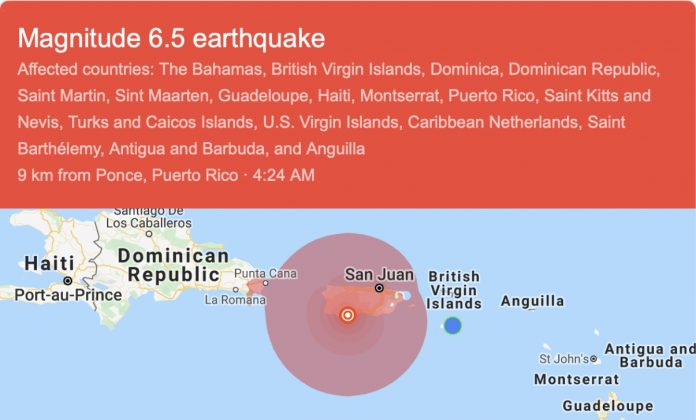 Sea levels around the Federation are expected to rise following A 6.4 magnitude earthquake that shook southern Puerto Rico Tuesday.

According to Met Office officials for the St. Christopher Air and Seaport Authority (SCASPA) Who indicated that Tuesday’s quake may trigger after effects for Caribbean Islands south of Puerto Rico including the Federation of St. Kitts & Nevis.

The 6.4 magnitude earthquake rocked southern Puerto Rico leaving at least one dead and damaged,homes and businesses and cutting power to parts of the island, just a day after a 5.8 magnitude quake shook the US territory.o

The 6.4 quake struck at 4:24 a.m. centered just off Puerto Rico’s southern coast, about 6 miles south Indios, a town of a couple thousand people, the US Geological Survey said.

They cautioned to be observant and exercise normal caution if you are near or in the ocean in case of minor sea level changes.

The National Emergency Management Agency (NEMA) and the Nevis Disaster Management Department (NDMD) have said that they were actively monitoring the rise in seismic activity in the region.

“Effective action during an emergency can only be achieved if the public is made fully aware in advance of the nature of the hazard, the consequent risks and what can be done to reduce these risks.”