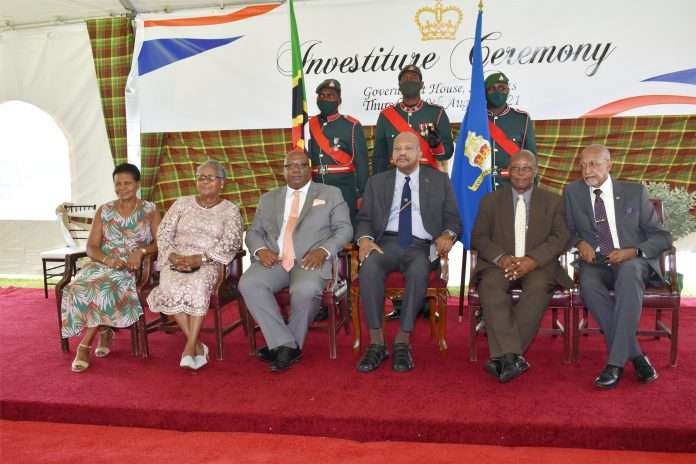 BASSETERRE, ST. KITTS, August 19, 2021 (MMS-SKN) — Governor General His Excellency Sir S.W. Tapley Seaton GCMG, CVO, QC, JP, LL.D presided over the Investiture Ceremony held on Thursday August 19 at Government House in Springfield, Basseterre, where eight nationals were officially invested with Her Majesty the Queen’s 2021 New Year Honours for their outstanding and meritorious service to the continued development of the Federation of St. Kitts and Nevis.

In delivering congratulatory remarks after the eight honourees were invested with their Her Majesty the Queen’s 2021 New Year’s Honours, Prime Minister Dr the Hon Timothy Harris said that the honours served as a powerful example for others in the community that they can hope for a better future, and that anyone of them has the power to make that future happen.

“Our recipients today heard the call to service and they answered it and they served extremely well,” said the Prime Minister. He went ahead and detailed the areas the eight honourers had served their country so well.

“In the era of gender sensitivity, we certainly do appreciate that three of our eight awardees are outstanding females,” he added. “I want to thank them all – give them a special hand.”

He added: “They have reached to the zenith of national recognition.”

These were Cabinet Secretary Mrs Josephine Huggins, the first on Her Majesty the Queen’s 2021 New Year Honours list, who was invested with the Companion of the Most Distinguished Order of Saint Michael and Saint George (CMG) for her contribution to public Service.

“So henceforth when we call their names, we shall say Mrs Josephine Huggins CMG, and we know that is for recognition of outstanding service in the public service,” said Prime Minister Harris. “And interestingly her career path took her to high positions not just in her ‘borning land’ (land of her birth), but in St. Vincent and the Grenadines. In some respects she is truly a Caribbean person, but a patriot of St. Kitts and Nevis by heart.”

The second on the Her Majesty the Queen’s 2021 New Year Honours list was Deputy Governor General for Nevis, Her Honour Mrs Hyleeta Liburd MH, who was invested with Officer of the Most Excellent Order of the British Empire (OBE) for her contribution to public service.

“Her Honour Mrs Hyleeta Liburd MH, OBE for outstanding contribution to public service,” said Prime Minister Harris. “And the class and the dignity and humility that always abound in everything you do, Madam Liburd, we say thank you. Sometimes in her quiet way, as I see her from time to time, at church, at official occasions, she will come and gently say to me in a soothing way, ‘so nice to see you’, and she shares her love.”

Added the Honourable Prime Minister: “So I want to say thank you for making me feel very special not only when I am in my father’s land on Nevis, but on each occasion that we meet.”

The third female honouree and the fourth persons on Her Majesty the Queen’s 2021 New Year Honours list was prominent businesswoman, Mrs Venetta Laws, who was invested with Member of the Most Excellent Order of the British Empire (MBE) for her contribution to community service and business entrepreneurship.

“Mrs Venetta Laws MBE for her contribution to community service, and for business entrepreneurship,” said Dr Harris. “Thank you very much for being my friend and thank you very much for the pioneering service you and your family brought in dry cleaning and other services and preventing us from having to send abroad our trophies, etc. etc. We thank you, and we commend you for all that you have done and will continue to do for our country.”