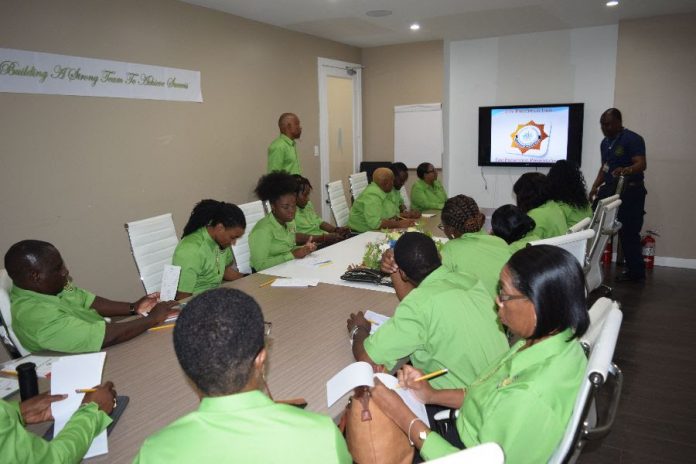 The work and dedication of the management and staff of the St. Kitts and Nevis Government Printery was recognized July 26 at its third annual Professional Development Day.

“I want you to be mindful of the fact that you contribute to the printery’s success,” Permanent Secretary Osbert DeSuza, said during the opening of the event. “The Printery also contributes to your success as you build a strong team. I want to commend you for a building a great team.”

He added the theme, “Building a Strong Team to Achieve Success,” was fittingwhile highlighting that the camaraderie of the staff can be seen through its work, adding the professional development day ensures capabilities and skills are kept apace with trends.

“I think this is important to every institution,” he said. “I think we tend to, in a number of cases, to settle into a mold when we go into a particular job environment and we don’t recognize that we have to change, we have to move with trends and the development in any particular area of endeavour that we are involved in.

Mr. DeSuza, on behalf of himself and the entire government, extended appreciation for the contribution that the Printery is making to national development, including the printing of the yearly estimates and budget documents. He went on to thank the staff who had been there for a number of years.

The permanent secretary noted the substantial investment the government has made towards the building of a new Printery.

The new Printery will increase the staff’s comfort and will be equipped with modern equipment. The permanent secretary thanked them for its patience, saying new building is advancing quickly and should be operational by the end of the year.

“The government is doing a number of projects concurrently and you are not left out,” he said. “You would appreciate that in order to improve the conditions under which you work, you would have to suffer a bit of inconvenience and that is what is happening now.”