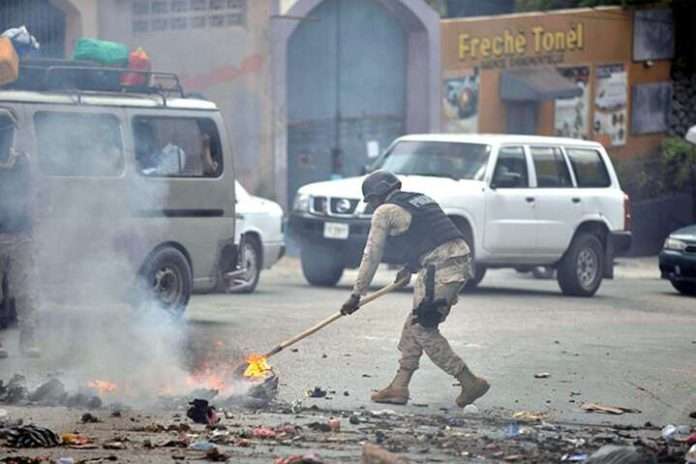 FANM said for a few days now, Haiti is under ‘total lock’, rendering the people hostage in their own land.

“The country has undergone a complete meltdown of security, skyrocketing prices of fuel and other basic necessities, and a general lockdown, in which banks have closed, markets are stop and go, reliable access to funds and basic necessities has disappeared, collective transport has come to a halt, and people have seen their livelihood and even mere survival disrupted,” FANM executive director Marleine Bastien told the Caribbean Media Corporation.

“Larger and larger numbers of people are demonstrating on the street, asking for change. Haiti is going through the worst crisis in recent history “she said, adding that she has been receiving calls from family members in the US and Haiti asking for help.

“Right now, the country is under total ‘lock, peyi-a lok’. There is no fuel, no food, and the cries of the Haitian people feel hollow amidst the deafening silence of the international community. Haiti needs help now.

“It needs security and safety from the on-going violence. Otherwise, the people will continue to risk their lives in rickety boats to make it to the land of the free (America).”

“We reiterate our call to the Biden administration to provide a safe haven and due process for people fleeing violence and grave human rights abuses in Haiti now,” he said.

Prominent immigration lawyer in Miami, Ira Kurzban, said the United States has “a moral obligation to stop the violence in Haiti.

“We have continued to support an autocratic, anti-democratic government there to the detriment of the Haitian people and over the objection of every major human rights organization and members of Congress. Support democratic leadership and end the violence,” he added.

The UN said heavily armed violent gangs, which have taken over large swathes of the capital, kidnap local people for ransom regularly.

In a rare moment reflecting the seriousness of Haiti’s descent into chaos, President Joe Biden used his speech at the United Nations on Wednesday to call on the international community to do more to assist the Caribbean nation as it faces its worst crisis in decades. “We continue to stand with our neighbor in Haiti as it faces political-fueled gang violence, and an enormous human crisis, and we call on the world to do the same,” Biden said. “We have more to do.”