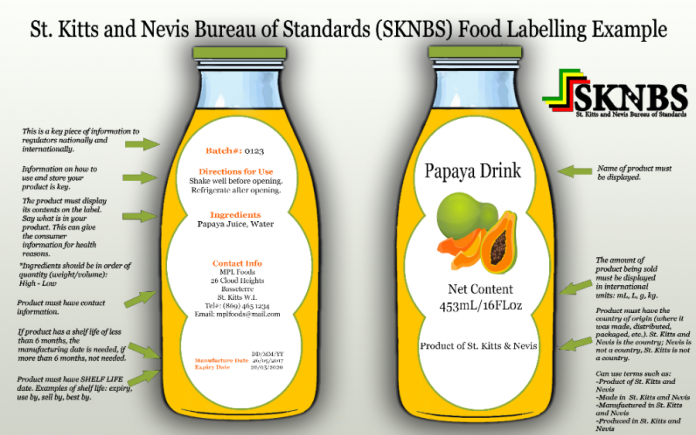 The St. Kitts Bureau of Standards (SKNBS) has announced it will be allotting more time for individuals, especially businesses, to familiarize themselves with the new, soon-to-be adopted labelling standards.

The adoption notice of the national labelling standards was published in the gazette in June 2019, said Head of Standardization and Chemist Jermine Mike, adding legally after 60 days, it should have been adopted.

The bureau deemed it necessary, however, to give the public more time to take note of the new labelling standards.

“We will be using [a labelling standard graphic] as a reference nationally to eventually govern the labelling of food, that is, pre-packaged food,” Mike said. “We want to give people the information before it becomes regulation so that they can make the necessary adjustments to their labels whether locally or internationally so that when the time comes to govern it is not so much of a burden on other people such as vendors, distributors, retailers and importers. Standards are a precursor to regulation, and when it comes to putting things in law there are usually penalties. So, we want to make sure that persons are given ample notice and access to the information to voluntary conform before any standard becomes mandatory.”

Mr. Mike invites the public to express any views and concerns to the Bureau of Standards.

“We are putting this out and we are inviting any questions persons may have,” he said. “They can contact us at the SKNBS at (869) 465-5279 or they can write in on sknbs@gov.kn. What we are trying to do here is to fulfill our legal obligation as mandated by our National Bureau of Standards Act that states that we shall publish it within the Gazette, which we have done, and if anyone would like to go and check it they can go to Government Headquarters at the St. Kitts and Nevis Information Service (SKNIS). We will also be publishing it on our website www.sknbs.org

While the labelling standard for Pre-Packaged Food is voluntary, Mr. Mike said that it is important to adopt and follow it, as it will soon become law. Locally, this standard will affect retailers, agro-processors, bakers, caterers and more. Internationally, it will affect food that enters the country without the necessary requirements such as the English language.

Another Labelling standard to take note of is the general requirements for goods. The SKNBS will regulate two pieces of information from this standard: the country of origin and the language, which must be in English.

“We have to look at it this way, when we say that we are adopting standards from the Bureau of Standards perspective, it is something that is voluntary meaning that you don’t have to comply with it,” he said. “However, standards can quickly become regulations and if there is a necessary need such as from a health and environment perspective, we will regulate. “So, to follow good regulatory practices, we would first adopt a standard and inform the public of the adoption to invite questions and comments.”

Head of Standardisation, Mike, noted that some of the new labelling standards will remain voluntary while others will become regulation  —  they are Packaged Water, labelling of Pre-Packaged Food, and Labelling of Goods.

“When we are going to form a regulation, we do not regulate the entirety of the standard, we take certain parts of it and say that this is mandatory and leave some of it voluntary,” he said. “Standards help manufacturers or distributors or whomever that is making and selling products and services to be more recognized whether it is locally or internationally. It makes it safe for consumers to consume and once you are following a particular standard, customers have more confidence that you are doing something correct.”