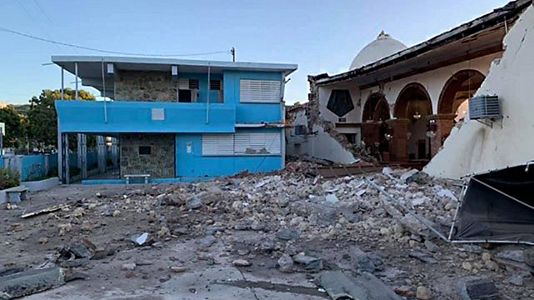 SAN JUAN, Puerto Rico (AP) – Puerto Rico´s government said Tuesday that in less than two months it hopes to relocate all of the families affected by a recent magnitude 6.4 earthquake that destroyed or damaged nearly 1,700 homes.

The announcement came as ongoing tremors have forced re-inspections of more than 7,000 homes that engineers already had visited.

“We know we still have a lot of work ahead of us,” Gov. Wanda Vázquez said. “No one was prepared.”

The quake that struck Jan. 7 killed one person and has been followed by hundreds of aftershocks in the southern part of the island, some strong enough to cause damage. U.S. President Donald Trump has approved a major disaster declaration for the area.

A total of 4,600 people remain in shelters in cities and towns along Puerto Rico´s south coast, although Vázquez said the majority did not report any damage in their house and were simply scared to return home due to the continuing shakes.

A government crisis center has received more than 29,000 calls from people emotionally affected by the earthquakes, and dozens of counselors have been meeting with those in shelters in an effort to get everyone back home or into a new place by late March, officials said.

Three hundred homes were destroyed and another 1,390 damaged by the quake. The local and federal governments have offered people shelter in hotels or have given public housing vouchers as crews prepare to demolish affected buildings in upcoming weeks.

The U.S. Federal Emergency Management Agency has so far received some 14,000 requests for help, and more than 1,000 families have already received rental assistance, said Alex Amparo, Puerto Rico´s coordinating officer. He said $3.8 million has been approved to help those affected by the quake, and that the figure will rise.