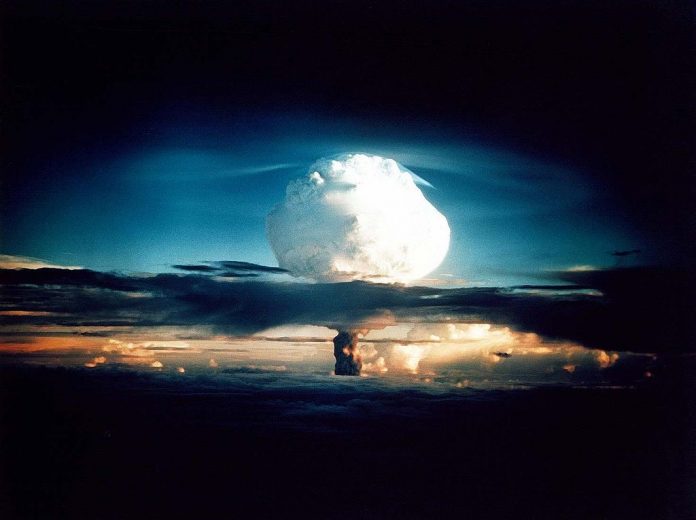 - Advertisement -
by Julia Mueller
THE HILL

U.S. officials are on edge over Russian President Vladimir Putin’s recent threat to use nuclear weapons, ahead of his illegal and contested move to claim huge swathes of Ukrainian territory.

Current and former U.S. officials on Sunday said that although there is nobody in Russia who could stop Putin from deploying nuclear weapons, such a move would guarantee a cataclysmic response from the U.S. and its NATO allies.

“To be clear, the guy who makes that decision, I mean, it’s one man. There are no checks on Mr. Putin. Just as he made the irresponsible decision to invade Ukraine, you know, he could make another decision,” Defense Secretary Lloyd Austin told CNN’s Fareed Zakaria on Sunday.

Austin added he doesn’t “see anything right now” to indicate that Putin has definitively made such a decision.

Former national security adviser H.R. McMaster on Sunday that Putin is “under extreme pressure” after battlefield failures and domestic frustration over a mobilization order that could send hundreds of thousands of reservists into the war.

“I think the message to [Putin] is: If you use a nuclear weapon, it’s a suicide weapon. And the response from NATO and the United States doesn’t have to be nuclear,” McMaster told “Face the Nation” host Margaret Brennan on CBS.

Putin’s move to annex four regions of Ukraine on Friday came after he warned that Moscow would deploy its massive nuclear arsenal to protect Russian territory or its people.

“This is not a bluff. And those who try to blackmail us with nuclear weapons should know that the weathervane can turn and point towards them,” the Russian president said in a televised address.

Officials in Kyiv and Washington have said they take the threat seriously, but will not be deterred from fighting to push out Russia from the regions it now claims.

Putin’s decision to call up as many as 300,000 reservists has been met with protests across the country and thousands of Russian military-age men fleeing the country to avoid the call-up.

But experts have said the poorly trained reinforcements are unlikely to change the course of the war, and fear Putin could be increasingly dangerous if Russia continues to suffer costly and embarrassing losses.

The Russian president is responding with “the only quiver he has left, which is to, you know, to threaten the use of a nuclear weapon,” McMaster said.

Former CIA director and retired Army Gen. David Petraeus on Sunday said that, if Russia used the weapons, the U.S. would lead a fierce NATO response.

The alliance “would take out every Russian conventional force that we can see and identify on the battlefield in Ukraine and also in Crimea and every ship in the Black Sea,” Petraeus said on ABC’s “This Week.”

“[Putin] is trying to cast this in any way that he can in a way to appear threatening, to be threatening, to try to get Europe to crack. He thinks he can out-suffer Europe, if you will,” Petraeus added.

Secretary of State Antony Blinken in a recent interview said he has told Russian officials “to stop the loose talk about nuclear weapons,” but also warned of the lack of checks on Putin from within the Kremlin.

“Russia has gotten itself into the mess that it’s in is because there is no one in the system to effectively tell Putin he’s doing the wrong thing,” the secretary of state told CBS “60 Minutes” host Scott Pelley in an interview that aired last week.

“It’s very important that Moscow hear from us and know from us that the consequences would be horrific,” Blinken said.

White House National Security Adviser Jake Sullivan last week said the United States will “respond decisively” to any nuclear weapon use and said the U.S. has “spelled out in greater detail exactly what that would mean” in top-level talks with senior Russian officials.

“Let me say it plainly: If Russia crosses this line, there will be catastrophic consequences for Russia,” the top national security aide said.

Ukrainian President Volodymyr Zelensky has long cautioned of Russia’s “nuclear terror” and “nuclear blackmail” amid the conflict and the tensions at the Zaporizhzhia nuclear power plant, which has been occupied by Russian forces since the start of the war more than seven months ago.

However, he dismissed Putin’s nuclear threats as a “bluff” back in March, changing his tune during an interview last weekend.

“Look, maybe yesterday it was bluff. Now, it could be a reality,” Zelensky said of Putin’s remarks on CBS’s “Face the Nation.”

See all Hill.TV See all Video

Democrats’ dilemma: How to get Jan. 6 recommendations through Congress